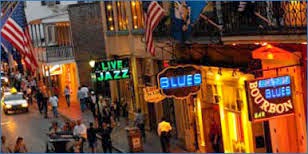 When I went to live in the US in the Seventies there were two cities I most wanted to visit, San Francisco and New Orleans. The former was easy, as I lived firstly in LA and was soon wafted there on music industry business, to interview Carlos Santana as it happens, and it was everything I’d hoped, full of free-thinking people who shared my attitude to life, and I've been there many times since.
New Orleans wasn’t so easy, but I managed to take a holiday there in 1974, spending a week in a hotel in the French Quarter with a girl called Debbie I'd met in St Louis on my travels, hanging out most of the night and sleeping most of the day. It was fabulous, its downtown architecture lovely to look at with its wrought iron frontages dripping with plant life, and probably the most un-American city in the USA I ever visited.
For a start, there was music everywhere, in the bars, in the clubs and on the streets. Bourbon and the surrounding streets simply dripped with music, all audible from the outside as you walked along. n one bar I drank a mint julep and, obeying local custom, threw my glass into a fire. I suppose I'd paid for it in the price of the drink. Many of the indigenous population spoke French, as did I, a bit anyway, and I’ll never forget the look on Debbie’s face when we walked into a French restaurant and I chatted with the waiter in his native tongue, asking for a table 'pour deux pres de la fenetre'. This elevated me in the eyes of the staff and the service was très très bien, and Debbie was pretty impressed too as we took our window seat.
One night in a bar, very late and unsober, Debbie and I found ourselves in the company of some British Navy sailors on shore leave who invited us back to their ship, a well dodgy enterprise. Debbie tottered up the gangplank on her high heels but we were thrown off by an officer whose job it was to make sure security wasn’t breached in this way. Good job as heaven knows what might have happened if she was the only girl on board. In the daylight we rented a car and drove over mile-long bridges into the humid bayous and at night we hung around in bars listening to jazz and blues and R&B. And yes, I did pay five dollars to hear the Preservation Hall Jazz Band, senior citizens all, play ‘When The Saints’.
All of this flashed back to me that week in 2005 when Hurricane Katrina visited its havoc upon this lovely city. I watched my TV in horror as the coastline was reduced to rubble and great waves washed up in the city streets, and I couldn’t help but think that America, the great USA, was in times like this as utterly helpless against the forces of nature as those countries on the eastern Indian Ocean who suffered so much that Boxing Day when the tsunami hit. My heart went out to the people stranded in that great sports stadium, among them the musician Allen Toussaint I heard, almost every one of them poor and black. And then I read about how the Bush administration had cut funding for storm defences and yet again found myself shaking my head in bafflement at the damage he inflicted on the country he lead so ineptly, and shaking my fist at his image on the screen when he made some pathetic speech about how… this great city will rise again. Tell that to those terrified, angry, starving people, I thought, when he failed to differentiate between looters who stole jewellery and those who helped themselves to a loaf of bread because they and their children hadn’t eaten for three days.
I didn’t intend this to be a polemic against ol’ Dubya when I started writing… it just ended up that way. It’s intended merely as an expression of regret towards a beautiful, music-drenched city that I once had the great fortune to visit.

Hey, Chris. Nice try but George Bush wasn't to blame for the Katrina mess. The blame lies squarely on the corrupt criminals who run New Orleans. And you being a leftist, Chris, if you were a voting citizen living in the city of New Orleans, they would be the very same people you would vote for year in and year out.

There is shocking news in the sports betting industry.

It's been said that every bettor must watch this,