THE WHO BY NUMBERS – Book Extract

Another extract from my Guide to The Who's Music, this on on By Numbers. 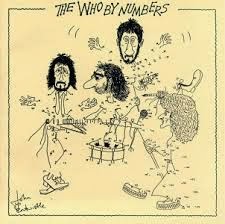 By the time The Who got around to recording The Who By Numbers, they were tired, insecure and feeling the pace, and although this record was never intended as a concept album, there is a running theme of discontent, disillusionment and, above all, the dilemma of growing old in the band that once sang about hoping to die first. It was almost as if Pete Townshend approached this stage in The Who’s career as a penitent might approach the confession box. Never one to shrink from the truth, Pete lays bare his soul and the demons that lay within, and it didn’t always make for easy listening.
Overall, this release has a much lighter touch than any of its predecessors. Here Townshend abandons the synthesizers of Who’s Next and Quadrophenia, and eschews his trademark block chords for diligent lead guitar, acoustic guitars and even his old banjo. Keith’s drums rarely pound as they once did and Roger’s voice, becoming deeper but more sonorous as it aged, no longer spits out Townshend’s words with the ferocity of old. Nicky Hopkins joined the group in the studio, adding tasteful piano to six of the tracks but further distancing the sound from classic Who. Only John retains his trademark bass-style, fast and fluid and, on ‘Dreaming From The Waist’, in a class of his own.
At this point in their career The Who on record and The Who live became two different entities. Only two of the new songs here – ‘Squeeze Box’ and ‘Dreaming From The Waist’ – were played with any regularity in a live set that gradually became a celebratory and vigorously performed parade of former glories, though ‘Slip Kid’ and ‘However Much I Booze’ were tried on stage and soon discarded. On its release The Who made a triumphant return to the stage, touring the US with the same zest and expertise that they showed five years earlier, but deep inside Townshend knew that to survive as a creative vehicle, and therefore retain his interest, The Who had to change – or stagnate. The problem was finding the direction in which to change while meeting the expectations of fans who liked their Who loud and brash, just as they always had been.
All of these factors produced a rather non-Who sounding Who album, or perhaps more accurately, a Pete Townshend solo album using The Who as a back-up reference. Thought of in that light, the album has much to recommend it: ‘Slip Kid’, ‘Dreaming From The Waist’ and ‘Imagine A Man’ were all first rate songs, ‘Success Story’ was good enough to have succeeded ‘My Wife’ as a stage vehicle for John (though it never did), ‘Squeeze Box’ was fun and a minor hit on both sides of the Atlantic, and ‘Blue, Red And Grey’ was as charming a solo piece as Pete has ever recorded, backed by himself on ukulele and John on brass playing his own silver band arrangement. The album has aged well, it just doesn’t have that ‘kick in the gut’ effect of earlier Who albums.
Clad in a self-depreciatory join-up-the-dots cartoon design by John, it reached number seven in UK and eight in the US. In 1996 the album was remastered and re-issued with three bonus tracks, live versions of ‘Squeeze Box’, ‘Behind Blue Eyes’ and ‘Dreaming From The Waist’, all recorded at Swansea Football Ground on June 12, 1976. ‘Dreaming’ features John’s remarkable bass playing as the song reaches its conclusion.
Posted by Chris Charlesworth

If you need your ex-girlfriend or ex-boyfriend to come crawling back to you on their knees (no matter why you broke up) you must watch this video
right away...

Follow our signals today and gain up to 270% a day.

It has been said that every bettor must watch this,

Watch this now or stop betting on sports...