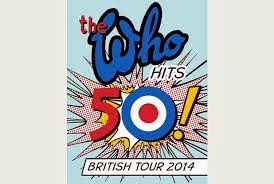 Great review. I especially agree with your comment about the bass. Pino definitely could have been louder. My favorites were: Magic Bus, Join Together, 5:15, WGFA, Eminence & I'm One.
And one correction: Pete did a simplefied version of his famous jump. Loved it, because it seems like it's in his genes. :)

Must have been looking the other way! Dammit.

" There is a school of thought... that Townshend and Daltrey have no right to continue as the Who. That this Who is simply a tribute act to the old one. Well, so fucking what. It doesn't matter. " Good to see Pete and Roger aren't the only figures from Rock's glory days that still have the edge and attitude that defined an era! Well said, as always, Chris. Thanks for the review. And, speaking as a Wholigan, whose first show was the 'Farewell Tour' in 1982, it's great to see an old school fan give respect and understanding to us poor souls that missed Keith. It's so refreshing to read a critic unafraid to pronounce his love and passion for my favorite band. I can't wait for the US tour this spring. Well done, mate. Long Live Rock. Long Live The Who!

Going to Louisville in May to see them... this will make it 5 decades in a row for me! I am really looking forward to it.

Listening to Who's Next in 24/96 as I type this and I, too, think Pino is dropping the ball (or has been instructed to drop the ball). You know who might've been awesome? Morgan Nichols, Billy's kid--monster player with the Senseless Thingsm, really had a lot of (sonic) presence. Ah, well. Can't wait until NEXT November when I finally get to see 'em.

Thanks for the review, sadly I am at work offshore West Africa all December so have missed the chance of hearing their unique music. 1970 was my first WHO show probably at their peak then, after losing Moon and now John they remaning 2 have become better musicians but early WHO was dynamite on fire. Long Live Rock.