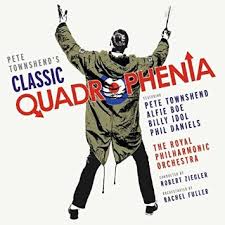 Back in 1972 I was given a copy of the Lou Reizner production of Tommy to review, and being as how I was big on Tommy at the time, and even bigger on The Who, I gave it a rave notice in Melody Maker, a bit over the top in fact, which I would come to regret later. The truth is I don’t think I ever played it again and it sits upstairs amongst my Who collection in pristine condition, a bit like plenty of other albums and CDs that include ‘interesting’ rarities or ‘alternative’ versions of songs that tend to be listened to just the once out of curiosity’s sake, then left unplayed because you can’t get away from the fact that the original is the best, and that’s the one you turn to when you want to hear a song or an album again. So I’ve listened to The Who playing Tommy, both the original studio album and various live versions, countless times but that symphonic Tommy by the London Symphony Orchestra and guest singers sits upstairs abandoned like an old t-shirt you won’t ever wear again but don’t have the heart to throw away. I never even bothered to get a CD version.
So now we have Quadrophenia recorded by the Royal Philharmonic Orchestra and London Oriana Choir, conducted by Robert Zeigler and orchestrated by Pete’s partner Rachel Fuller, which goes one step further than Reizner’s Tommy in that instead of rock singers taking the vocal parts, we have opera star Alfie Boe singing most of the songs along with guest stars Phil Daniels and Billy Idol, and Pete edging in on guitar and the odd vocal line too.
And it sounds pretty good too, very dramatic, very classical, especially when the choir comes in to boost the choral landscape and the orchestra gives it full welly, probably not a term used by reviewers of classical music, which is probably why my favourite tracks are the opener ‘I Am The Sea’, ‘Quadrophenia’ itself and the penultimate ‘The Rock’ which, regrettably, lacks those pesky seagulls in flight. What these three have in common, of course, is that they are instrumentals, with no vocals at all, for try as I might I can’t seem to appreciate opera singing whether it’s Carmen or Placido Domingo or Quadrophenia, and tenor Alfie Boe, for all his operatic credentials, just doesn’t sound right singing lines originally sung by Roger Daltrey, while Daniels and Idol seem to me to be trying too hard to inject a bit of East End ‘ardman into the lines they are given. Even Pete, singing that wonderful refrain in ‘The Punk And The Godfather’ (“I have to be careful not to preach…”) adopts a rasping tone that for me is far less effective than the more melodic way he sang it on the original.
In the review of Quadrophenia in my book The Complete Guide To The Music Of The Who (1995, revised ed. 2004 with Ed Hanel), I wrote of the song ‘Helpless Dancer’: “A dramatic but lean operatic-style aria featuring a double tracked Roger over staccato piano chords, acoustic guitar and little else. Underarranged, short, and decidedly experimental in tone, this is the least Who-like piece on the album…”, thus identifying that this song would benefit from an operatic style arrangement, which it does. Others that do likewise include ‘Drowned’, ‘Cut My Hair’ and, of course, ‘Love’ Reign o’er Me’. The slower ‘Sea And Sand’ sounds fine until the sudden central section (“My jacket’s gonna be cut slim…”) and, after its lovely intro, ‘5.15’ appears strained, with the line about “girls of 15 sexually knowing” sounding uncomfortable in Boe’s interpretation in a way that it never did when Roger sang it. ‘Bell Boy’ worked far better with Keith carrying the baggage out, and ‘Doctor Jimmy’ doesn’t come into its own until the “What is it? I’ll take it” chorus. As noted, the slow, über-dramatic ‘Love ‘Reign o’er Me’ makes for a powerful climax, its chorus perfect for Boe’s range.
In a nutshell then, the slower songs lend themselves to this treatment better than the faster ones, which probably boils down to the fact that for my money opera singers aren’t suited to rock any more than rock singers are suited to opera.
Nevertheless, I applaud Pete’s decision to give his music broader appeal by attracting a new and different audience, and I’m all for rock music being recognised as the cultural phenomena that it undoubtedly is, even if this means it has to be framed in a different and not necessarily appropriate setting. The decision of whoever it is that compiles the UK’s classical charts not to recognise this version of Quadrophenia as being eligible smacks of elitism, and was roundly condemned by Pete who in his usual robust fashion has been quoted as saying: “So musical snobbery in the ‘classical’ elite is still alive and kicking then?Fuck ’em.” It's sales would evidently have pushed it to the top by the way.

Email ThisBlogThis!Share to TwitterShare to FacebookShare to Pinterest
Labels: Record Reviews, The Who (Pete)

Start following our signals right now and make up to 270% daily.