A few years ago I acted as the guinea pig for a feature idea called ‘Every Home Should Have One’ that a friend of mine, Eddie Blower, was pitching to Record Collector magazine. The idea was that someone with a background in music would be interviewed about a favourite album, but not necessarily an obvious choice or even a record that had become a hit. I opted for Five Leaves Left by Nick Drake, which I didn’t discover until long after Nick died, and as it happened I played it in my kitchen last night as I was making a meal for my son Sam and myself. Sam and I share a high opinion of Nick Drake, as we do on a quite a few musicians nowadays.
That has prompted me to post the entire interview that Eddie did, some of which I incorporated into another Drake piece on Just Backdated. Eddie’s feature idea didn’t take off by the way. 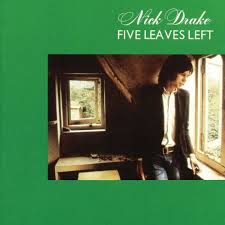 So Chris, when / how did you first hear about Nick Drake’s Five Leaves Left?

I knew of its existence because of the Island sampler Nice Enough To Eat, but that was as far as it went until… sometime in the mid-eighties, ie about 15 years too late, I was having a conversation with Dave Lewis, whom I know because of his Led Zep fanzine and who at that time was the manager of the Our Price record shop in Bedford. I asked Dave if there were any relatively unknown artists whose albums he kept having to restock because they kept selling out. The reason I asked was because I was always thinking about which artists (beyond the obvious) to feature in Omnibus books, “Nick Drake,” he replied. “I’m always re-ordering Nick Drake albums. They just keep selling. All sorts buy them, young, old, girls, boys, all word of mouth I think.”
“The folkie on Island?” I asked.
“Yes, but he’s not really a folkie. He’s much more than that. He’s great.”
So I went out and bought Way To Blue, a compilation of Nick Drake songs from the three albums he recorded for Island during his lifetime and Time Of No Reply which came out later, and I just loved it. Dave was right. Nick Drake wasn’t a folkie. The more I played Way To Blue the more I liked it and it was only a matter of time before I went out and bought all of Nick’s albums, and my favourite is the first, Five Leaves Left.

How long after that introduction did you own a copy?

About two months. What is unusual is that when I was on MM during the early 70s Island’s PR David Sandison and I became good friends, and he used to give me all the Island albums as promo copies… Traffic, Free, Fairports, Cat Stevens, Marley, you name it… but he never ever gave me a Nick Drake album. Maybe because I really liked Free and Traffic he thought I wouldn’t like Nick Drake much. Most PRs in those days and probably today just recommend stuff because they are paid to do so whether they like it or not themselves or whether it’s rubbish, but David was a good PR in that he didn’t try to oversell things and when he said something was good it probably was. He didn’t bullshit, he was sincere, so if he’d said Nick Drake was worth a listen I’d definitely have listened. But he didn’t. He never even mentioned him to me. I don’t know why or whether I would have liked Drake or not in those days because I was young and a big rock fan in the serious sense of the word, like I loved the Who as everyone knows, so I might have dismissed Drake as a ‘folkie’ who wasn’t my cup of tea. Maybe I wouldn’t have been mature enough to appreciate him then. I don’t know but I’d like to have tried. I liked Cat Stevens but I think I got into him because every single attractive girl I ever met in those days seemed to adore Cat Stevens so it was prudent to agree with them, but Nick Drake’s music was far more subtle than Cat Stevens or even Paul Simon. It demands greater attentiveness, harder work if you like, but I think it would have been worth the effort even then. I owned a Drake track on Nice Enough To Eat, but I overlooked it somehow. Great shame.

So, was your initial interest because of the artist or the music?

The music, absolutely 100%. I didn’t know the first thing about him, but like almost everyone else who’s become a late(ish) Drake fan I became fascinated by his story. It’s an extraordinary thing, like a great painter who was ignored until after his death… like Van Gogh.

What is it about the music on Five Leaves Left that has held you over the years?

Nick Drake was a singer, songwriter and guitarist of unusual skill and depth, thoughtful, poetic, enigmatic, dreamy and mysterious, complex yet potentially commercial (as has now been proved) to a perceptive market, certainly addictive, certainly sophisticated, an absolute natural talent, and quite unlike anyone else I’ve ever heard. Just a massive overlooked talent who was criminally, almost freakishly, overlooked during his lifetime.

Can you describe your emotional attachment to Five Leaves Left?

It’s one of those records I can listen to again and again now and never get bored. Indeed I can probably listen to the song ‘River Man’ over and over again and never get bored. It’s the illusive quality I think, forever interesting. With most artists you know what you’re getting but it’s not like that with Nick. You can listen over and over again and still not quite get it, so you listen again and it’s still magical. The same actually applies to the other two albums that were released in his lifetime to a certain extent (and also, most especially, to the later song ‘Black Eyed Dog’). It’s that dreamy, laid back quality to the music and the gentle sound of his voice, and the guitar playing which is so delicate and intricate, enormously skilful and complex, and the different tunings. The recordings are very ‘alive’. If you close your eyes while you are listening he could be in the room with you. He sounds incredibly romantic, a bit sad most of the time, weary, and very English, very middle-class, cricket on the village green, slightly posh (which he was) and almost from another world, absolutely timeless too.

Why do you think it failed to sell?

He wasn’t promoted which isn’t entirely Island’s fault as he was chronically shy and didn’t like performing. Everyone who sold records played live in those days and Nick didn’t.  It seems he couldn’t bring himself to promote his music in the means available to artists in those days, and yet at the same time he was crushed by its failure to sell.

How many people do you think you have recommended it too?

Dozens but it’s a no brainer these days as he’s become very popular, well popular to a cultish audience who probably think like I do. He seems to command real devotion which is partly to do with his music and partly the tragedy of it all. What is interesting is that you occasionally come across people who love him whom you might not expect to. Last summer I was asked to bring my iPod and dock speaker to a garden party in our village, an annual event for the people who live in our road, so that neighbours young and old can all get to chat to each other and drink wine. I’d made a playlist of what I thought was acceptable stuff (including Chopin, Spanish guitar and Glen Miller!) and put on a song or two from Five Leaves Left and the wife of a friend of mine, a well-to-do young mum who lives nearby, came over and told me how much she loved Nick Drake. I’d no idea she had the slightest interest in popular music, let alone anything as deep as Nick.

Have you ever got into an argument over this record?

Never. I can honestly say that I have never met anyone who doesn’t like Nick Drake. I’ve met people who are unfamiliar with him, sure, but no one has said he sucks!

Can you name any other (known) true supporters of this LP?

Too many to mention now. I think any great guitarist, from Richard Thompson on downwards, will appreciate his guitar skills.

How does the music stand up today?

Absolutely timeless, as I say. This is surely proved by the fact that Nick sold his millionth album a year or two ago, or so I read. In his lifetime it’s doubtful he sold more than 5,000 of any of his albums, probably less. Tragic really. In this respect I can’t help but think that back in the early seventies I was possibly in a position to have changed this, to have written about him in MM and maybe turned people on to him. But none of us did, barring Gerry Gilbert on Sounds who certainly tried but no one on MM picked up on him, or NME whose reviewer of Five Leaves Left compared him unfavourably to Peter Sarstedt of all people. That can’t have helped Nick’s frame of mind. Almost all contemporary reviews of his albums were fairly cursory to say the least. Nick Kent was just that bit too late in his appraisal really but he deserves a pat on the back for trying to expose Nick to a wider audience before anyone else. The late great Ian McDonald subsequently wrote a brilliant 16,000 word appraisal of his work, a large portion devoted to ‘River Man’, which in my opinion elevated Nick to his rightful place among the greats. This is the critical yardstick nowadays. It’s all hindsight but for me, it’s one of those classic ‘if onlys’ that everyone has… well, with me, it’s if only I’d heard Nick Drake in 1970 and asked David Sandison if he’d set up an interview, but then again it would probably have been like Gerry Gilbert’s interview, ie Nick wouldn’t have said a thing. But I’d like to have tried.

So Chris, in your opinion, why should every home have one?

Because if you really love the best popular music of the second half of the 20th century and take pleasure in seeking out the very best, getting into Nick Drake’s Five Leaves Left and also all his other work, is simply as rewarding as our kind of music gets.
Posted by Chris Charlesworth