THE WHO - I Can See For Miles

As I mentioned in a previous post, in April I was commissioned by Universal to write the notes that will appear in the booklet accompanying a forthcoming box set of 15 7-inch singles by The Who, all of them on Track Records. This follows on from a Brunswick Box containing eight singles (including ‘I’m The Face’ on Fontana), released at the beginning of April, and a soon to be released Reaction box with five discs.
Being as how we’re coming up to a big Who weekend, when all being well I’ll be posting from Hyde Park late Friday or Saturday morning, here’s what I wrote about a song they’ll probably be playing in Hyde Park and at Glastonbury, with another one to follow tomorrow: 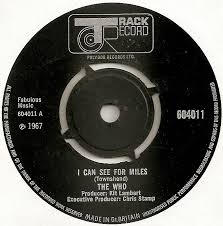 A: I Can See For Miles
Written by Pete Townshend. © 1967 Fabulous Music Ltd.
Produced by Kit Lambert.

Pete: “To me that was the ultimate Who record yet it didn’t sell. I spat on the British record buyer.”
‘I Can See For Miles’ is the link in the chain between The Who as a pop group and The Who as a rock band. Although their earlier singles had shown that the quartet was feistier than just about all the other acts that visited the UK charts before 1967, this was the year when everything changed and, happily for them, The Who found themselves perfectly equipped to join the New World Order. This much was certainly evident on ‘I Can See For Miles’, the highlight of their 1967 album The Who Sell Out, and a record now widely regarded as one of their genuine masterpieces.
The Who never sounded more alive than on this superbly crafted song, recorded between touring commitments; started in May at London’s CBS Studios, continued at Talent Masters in New York and completed in September at Gold Star in Los Angeles. With lyrics that suggest a connection to higher enlightenment, it is psychedelic without being trippy, straining at the leash but held together by Pete’s taut, ascending guitar riff, Keith’s seat-of-the-pants drumming and a red hot electric quality. The solo is like a live wire crackling in a gale: buzzing feedback, choppy chords and sustained tremolo-picking on a distorted single note that moves across the stereo spectrum, with John and, especially, Keith – on lead drums – riding the storm at their very best. Pete’s overdubbed guitar parts and the vocal harmonies were difficult to replicate in concert, which is why The Who rarely performed this all-time favourite on stage until 1989 and beyond, and only then when a second guitarist was added to their touring line-up. To the delight of fans, when the 2015/6 edition of The Who returned ‘Miles’ to the fold it sounded better than ever.
The failure of ‘I Can See For Miles’ to become a significant hit single (even in the US it reached no higher than Number 9) was a profound disappointment for Pete – and the fact that ‘The Last Waltz’, a saccharine waltz of appalling sentimentality by the pitiful Engelbert Humperdinck, held the top spot top at the time can’t have helped. In his autobiography Who I Am, Pete says the lyrics were inspired by jealous emotions brought on by suspicions that his girlfriend Karen Astley was cheating on him – she wasn’t – but when the dust had settled he was no doubt mollified by a note he received from the distinguished classical composer Sir William Walton, Kit Lambert’s godfather, congratulating him on its ‘ambitious harmonies’.
‘Someone’s Coming’ was produced by Kit Lambert in London during May 1967 with brass arrangements recorded at Bradley’s Barn, Nashville, on August 17, 1967. Mariachi trumpets herald Roger’s first stab at singing a song written by John, this one a mildly diverting but rather lightweight pop effort with lyrics in the ‘Wake Up Little Susie’ mode. John wrote this about secretly seeing his then girlfriend, Alison Wise, who would become his first wife and also the object of John’s wit in ‘My Wife’ (from Who’s Next).
Posted by Chris Charlesworth

FYI, Chris, Someone's Coming is often listed as being recorded at Bradley's Barn, but it seems to me I've seen something that indicates it was recorded at CBS in Nashville. If that's the case, the confusion is almost certainly because Owen Bradley had two studios. The first, the Quonset Hut on Music Row, was sold to CBS. A few years later, he opened Bradley's Barn outside of town. Often liner notes indicate "Bradley's Barn" when the studio was in fact the Quonset Hut (it was still referred to as "Bradley Recording Studios" for a while even after CBS took ownership).