THE JAM - About The Young Idea 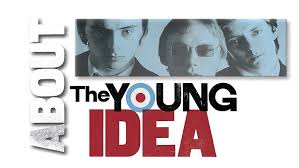 To Somerset House for About The Young Idea, an exhibition of Jam memorabilia put together largely by Nikki Weller, Paul’s sister, who earlier this year approached me with a view to Omnibus Press putting a book together based on the exhibits, with particular emphasis on Paul’s school exercise books. Unfortunately there wasn’t sufficient time to complete the project in time for the exhibition so it’s on hold. I loved seeing the exercise books that Nikki showed me for they contained Paul’s doodlings – drawings of guitars, snatches of lyrics, the usual schoolboy stuff you’d expect from someone who, to slightly misquote Bruce Springsteen, learned more from a two-minute record (baby) that he ever learned in school.
The exhibition is all that you would expect it to be, the highlight for me all those lovely Rickenbacker guitars. There’s one complete stage set up, with Paul’s guitar, Rick’s drum kit, Bruce’s bass and a wall of black and gold Vox AC30s on the back line left, always a heavenly sight for someone raised on The Beatles stage set. Other rooms have posters, front pages of the music press (always nice to see those MM logos again), some of the exercise books, singles and albums galore, videos, sharp clothes – The Jam always were first class coat hangers – and glass cases containing guitars.
Here’s a few pictures: 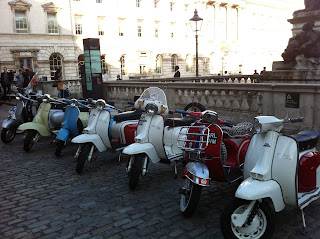 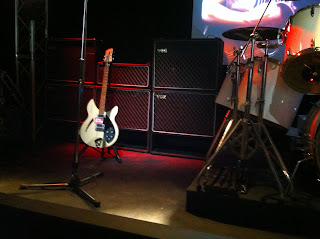 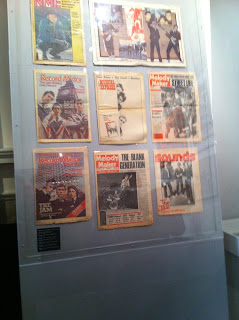 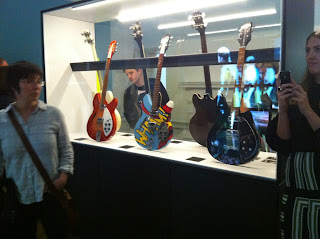 In the bookshop in the entrance hall there’s a fine selection of books, some published by Omnibus, including Rick Buckler's recently published autobiography and what was for a while our best seller, Paolo Hewitt’s Jam biography A Beat Concerto, now out of print but selling second hand for around £50, depending on its condition. 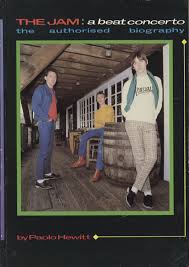 Although Paul Weller would probably disagree and might even be profoundly offended, I always considered The Jam to be the Sons of The Who, and because I hold The Who in high esteem, this is actually a compliment as far as I am concerned. Separate singer aside, they looked the same, even if John stood still while Bruce jigged about, they sounded the same, some of the time anyway, and seemed to arise from the same well of imagination that drove the early Who into their Mod era which The Jam picked up on in spades. It is a glorious legacy, which I’ll be celebrating later today as I watch Weller, followed by The Who of course, in Hyde Park.
One thing The Who never did, though, was appear on the same bill as drag artists. I couldn’t help but chuckle at this poster. 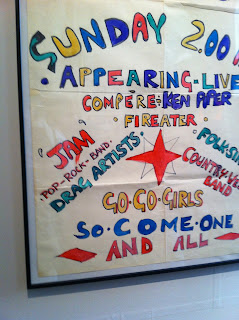 Email ThisBlogThis!Share to TwitterShare to FacebookShare to Pinterest
Labels: The Jam, The Who

Good blog. As a fan of both The Jam and The Who I would certainly say that the very early Jam stuff relied heavily on riffs from My Generation and the mod link is there I suppose, but The Who moved off in a whole different direction really and other influences came more to the fore in Weller's writing, more notably The Kinks, Small Faces and of course The Beatles. Back to the Exhibition. Seeing everyone's photos from Somerset House popping up on FB and Twitter was cool and heart warming in equal measure. Nice to see two thirds of the band hugging each other - shame Rick couldn't make it. The one vibe I did pick up on (and I wholeheartedly agree with it) is that - certainly among those of us lucky to be around during the band's lifetime - there is little appetite for a reunion in terms of a gig, but a huge appetite to see our three heroes kiss and make up (if that is the issue). How wonderful it would be to see Paul, Bruce AND Rick together at the exhibition. It took two really sad events to get Paul and Bruce back in touch, and life is too short. The three of them should be able to celebrate their legacy together. Long live The Jam!

Oh, I absolutely agree. The Who went off in a different direction in 68/9. But life is definitely too short for PB&R not to be at least friends, if not playing partners any more. I'd love to see all four of my pals in Slade back together too, just for a photo, a smile and a handshake.

Interesting review and went to this at the weekend - Money for old rope - £19 for me a and the Mrs. and in there for about 15 minutes - probably have more memorabilia up the attic - Was up to see Classic Quad in the Royal Albert Hall and would have been really pissed if I have traveled up just to see this!!! Dig the new breed indeed!!

(VIDEO) Get your ex CRAWLING back to you...?