THE BEATLES – Looking Through You 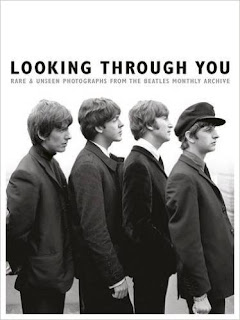 About a year ago Tom Adams came to see me with a proposition for Omnibus Press. He was, he said, the son-in-law of Sean O’Mahony, the now retired publisher of The Beatles Book Monthly, who during the sixties had amassed a gigantic collection of photographs of The Beatles to which he owned the copyright. Many of these had appeared in the magazine but many hadn’t. Was I interested in looking through the collection and maybe publishing a book of them?
Well, this was a no-brainer as they say these days. Yes, I said. So Tom sent me lo-res scans of 745 photographs of the Fabs taken between 1963 and 1968, divided into 34 sessions at which the BBM’s photographer Leslie Bryce had been on hand with his camera. This was actually the tip of the iceberg, as Tom thought there were over 5,000 in Sean’s possession, many of them never even printed up.
In Beatles terms this treasure trove was the equivalent of the National Gallery finding a bunch of long lost pictures in the attic of a house once occupied by Picasso, so I decided to seek the opinion of experts. Enter writer and Beatles connoisseur Andy Neill who amongst other things works as a researcher for Mark Lewisohn, now widely recognised as the world’s foremost authority on The Beatles. It wasn’t long before Mark came on board too, so enthused was he with the collection, and between them they chose what they regarded as the best shots, almost 400 in all, from the archive. Their criterion was a combination of rarity value, image quality and whether or not a picture was ‘interesting’ insofar as it had a story behind it.
Fortunately, every photograph in the archive was accurately dated so with prior knowledge gained through his life-long research into anything and everything that John, Paul, George & Ringo got up to during the sixties, Andy was able to write precise and informative captions to every photograph. He also wrote a lengthy introduction that tells the full story of The Beatles Book Monthly, while Tom’s wife Jo added a Foreword about how her father’s foresight in recognising the merits of The Beatles early on led to the launch of the magazine in the first place and, by extension, the existence of this important archive. We even found a letter from Brian Epstein to Jo’s father confirming the co-operation of The Beatles in exchange for one third of the magazine’s profits.
So it is that almost a year later Omnibus Press is on the brink of publishing Looking Through You: Rare & Unseen Photographs From The Beatles Book Archive as a cased and numbered 208-page limited edition of 3,000, designed by Lora Findlay with text by Andy with a little help from Mark, the project overseen by yours truly. Also in the package is a replica of a rare Beatles artefact associated with the magazine: the 1964 Beatles Book calendar, containing a further 12 photographs from the Beatles Monthly archive, not to mention the rather quaint horoscopes for each month of the year.
Leslie Bryce photographed The Beatles on tour, in transit, in their dressing rooms and on stages in the UK and elsewhere; at Abbey Road while they were recording tracks from Beatles For Sale through to the White Album; on the sets of their films A Hard Day’s Night and Help!; in Brian Epstein’s NEMS offices in London; and, barring Paul, in their own homes. There’s a wonderful shot of JPG&R in the sea off Miami Beach where a trio of girls in sixties swimwear are rushing through the waves towards them; shots of Paul attending to Dusty Springfield’s elaborate beehive hair-do backstage on Thank Your Lucky Stars; and, perhaps best of all, George playing bass on an early take of ‘Paperback Writer’ at Abbey Road, not to mention separate shots of both John and Paul playing Ringo’s drums.
Very few photographers had such unlimited access to the group as Bryce and though it’s almost impossible to claim that every picture in this book hasn’t been seen before, it’s true to say a good number are published here for the first time or have never been displayed in their full glory as they are in Looking Through You. In order to accommodate its A5 dimensions, many of the pictures that appeared in the magazine in the sixties were severely cropped.
Most of the photographs in the book are from the period between 1964 and 1967, what I would term the classic Beatles era, when they were recording Help!, Rubber Soul, Revolver and Sgt Pepper and the touring was coming to an end. After that the group, especially John and George, was less inclined to be ‘fab’ and therefore less willing to pose for Bryce. The first spread comes from the Winter Gardens, Margate, where The Beatles played for a week between July 8-13, 1963, and the final one from Abbey Road, a series of shots taken on June 4, 1968, when they were recording ‘Revolution’ for the White Album.
“We think there’s more to this collection than just unseen images,” writes Jo Adams in her Foreword. “These photographs are of great historical importance and this book provides not just an opportunity to showcase these marvellous images of The Beatles but to demonstrate that my father and The Beatles Book were a vital part of their story too.”
Here are a few photographs from the book, together with abridged versions of Andy’s captions. 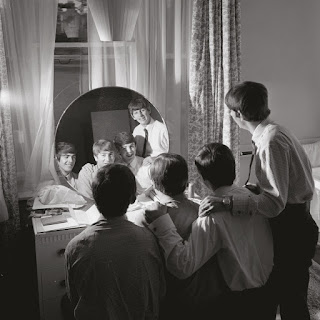 MARGATE, JULY 8–13, 1963
The Beatles kill time between performances gazing at their reflections for a Leslie Bryce-arranged pose. 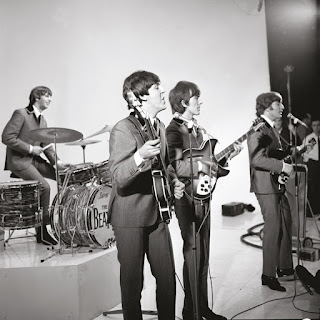 SCALA THEATRE, LONDON, MARCH 1964
Shooting the climactic television concert sequence for A Hard Day’s Night which included ‘Tell Me Why’, ‘If I Fell’, ‘I Should Have Known Better’ (featuring John on harmonica), ‘You Can’t Do That’ (which was cut from the finished film) and ‘She Loves You’. 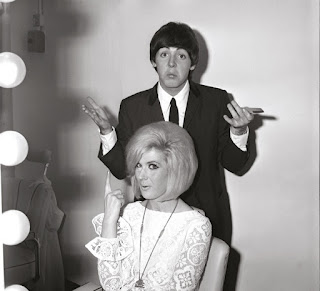 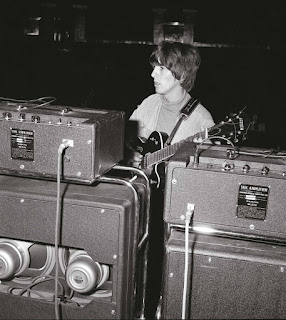 ODEON THEATRE, HAMMERSMITH, LONDON, DECEMBER 21, 1964
George checks his equipment on the first day of rehearsals for the seasonal run which opened on December 25 and ran until January 16, 1965. 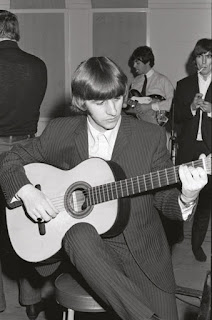 EMI STUDIOS, LONDON, FEBRUARY 19, 1965
Ringo masters a ‘C Major’ chord on George’s Spanish guitar during the recording of ‘You’re Going To Lose That Girl’, which was completed in a single afternoon session with just two takes and overdubs. 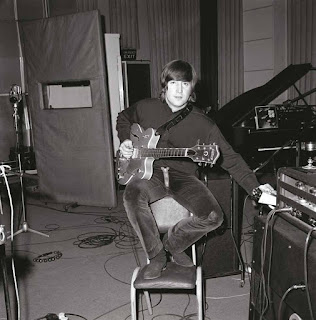 EMI STUDIOS, LONDON, APRIL 14, 1966
One of the guitars John used on the ‘Paperback Writer’ session was this orange Gretsch 6120 Chet Atkins Nashville model which he generously gave to his cousin David Birch the following year. The guitar, which came up for auction in 2014 but failed to reach its reserve price, was subsequently sold privately for $530,000. 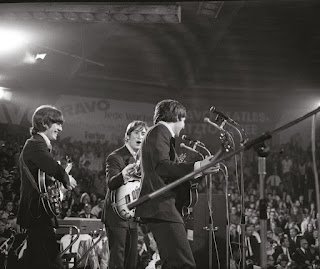 CIRCUS-KRONE-BAU, MUNICH, GERMANY, JUNE 24, 1966
With only the briefest of rehearsals in their hotel suite, it was painfully obvious to those who cared to listen that The Beatles were out-of-shape as a live band for their final world tour, evidenced by lacklustre playing, forgotten lyrics and often out-of-tune performances. Much to George’s amusement, John reminds a forgetful Paul of the opening lyric to ‘I’m Down’ at the finale of the evening Munich show. 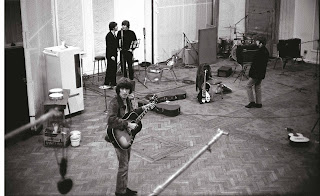 EMI STUDIOS, ABBEY ROAD, LONDON, NOVEMBER 3, 1965
A panoramic view of The Beatles at work in Studio 2 during the recording of ‘Michelle’ for Rubber Soul.
Posted by Chris Charlesworth