ELVIS AND JOANNA – And Priscilla And A Few More 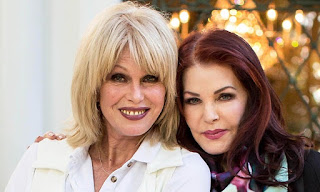 
(The photo was taken by Jaimie Gramston)
Posted by Chris Charlesworth

I admire Priscilla for her handling of the Graceland Estate after Elvis died. Although they had been divorced c.4 years by that point, without her initiatives the estate would probably have been lost and, though I've never been there, it occupies an "important" place in the history of contemporary entertainment.

Regarding the interior of Graceland: What we see today is Priscilla's restoration of how it looked when she lived there. Elvis's subsequent girlfriend, Linda Thompson, redecorated the place c.1974 in what was then considered a more contemporary style. (She loved the color red). Priscilla changed it all back before it opened up to the public. But it looks great, and certainly more credible than that glossy white “shotgun shack” in Tupelo, on which I expect to see solar panels any day now.

I (grudgingly) think Jerry Schilling's assessment of Colonel Parker's abilities were quite accurate. Certainly he lacked any artistic vision, but as a manager he saw his responsibility as simply one of making money rather than developing his client. Classic Elvis albums like the wonderful post-army "Elvis Is back" failed miserably in sales terms when compared to the dross of the movie soundtracks. Similarly, attempts at "dramatic roles" in films like “Flaming Star” and “Wild in the Country”, didn't attract significant audiences when compared to embarrassments like “Blue Hawaii” or “Girls Girls Girls” etc. The blame for not deciding to opt for the art of it, rather than the dollars, ultimately has to rest with Elvis.

One can argue for ever about what actually was the first rock n roll record, but Colonel Parker's actions and attitude unwittingly invented the pop industry as we know it: Posters, calendars, dolls, lunch boxes, That marketing approach, where the musical product was almost secondary to what could be gained from exploiting the image, was the real “first”. The tragedy is, his client’s genuine ability and genius was tainted and side-lined as a result.

I won’t be buying the new orchestral album, but it has more merit then The Colonel’s compilation “Elvis Sings for Children and Adults To”, released soon after Elvis died.

Yes, full marks to Priscilla for the way she handled the estate and for standing up to Parker. I won't be buying the orchestral album either. Thanks Ian.