LED ZEPPELIN – The Mystery of the Quotient 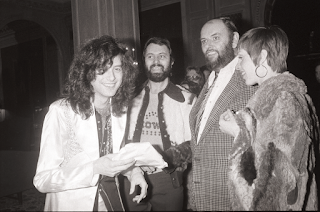 My friend Bob Gruen sent me this picture the other week, Jimmy Page, Richard Cole, Peter Grant and Peter’s girlfriend, with my head visible in the background between Richard and Peter, looking towards the camera.
I thought at first that it was taken on October 20, 1976, in New York, at the party at the Pierre Hotel following the première of Led Zeppelin’s The Song Remains The Same movie but pictures from that event in which I appear alongside Grant in Neal Preston’s Led Zep photo book show Jimmy and Richard wearing different outfits, so it wasn’t there. Then someone who knows more about where Jimmy Page was during the seventies than Page does himself suggested it might have been taken at the party following Monty Python’s live show in New York in April 1976. This was possible because I was certainly there, as were various members of Led Zep who were on their year out of the UK for tax reasons at the time. However, once again in pictures definitely taken at that party that show Jimmy and Robert Plant with Michael Palin, Jimmy isn’t wearing this white jacket or the string of pearls around his neck.
As a general rule I’m pretty good at recalling where I was when in the company of Led Zeppelin, but this one has got me stumped.
Any ideas?
Posted by Chris Charlesworth

Have you posted this picture on the Richard Cole Appreciation Society Facebook page. Mr Cole is a member of the group and at times answers questions.

This is a Neal Preston picture, and according to his own illustrated book "Led Zeppelin: Sound & Fury", it was taken during a gig at Nassau Coliseum, Uniondale, NY, on February 13, 1975.

Can't be. I never saw Led Zep at Nassau Coliseum! The only place I saw therm in the vicinity of NY was at the Garden; twice, once in '75 and once in '77.

That's it, Chris. I tried to attach a screen picture of the e-book, but this field doesn't support image files. May I send it to you?

I saw it. It's still a bit of a puzzle as I still don't recall seeing them at Nassau Coliseum.

The very basic need for handling a corporate event is a step-by-step process to see through the various steps from beginning to end. There are many management companies for New York corporate events providing expert solutions for this.