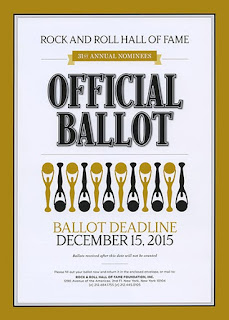 Returning to my office desk this morning after a few days at home recovering from a nasty cold, my eyes fell upon a large envelope containing the ballot form for the inductees for the 31st Annual Rock And Roll Hall of Fame ceremony, a ritual I have been performing since the eighties and which I have written about before on Just Backdated, so I won’t bore you with any background details.
As usual there are 15 names on the list, of which I can choose five for nomination. They are The Cars, Cheap Trick, Chic, Chicago, Deep Purple, Janet Jackson, The JBs, Chaka Khan, Los Lobos, Steve Miller, Nine Inch Nails, NWA, The Smiths, The Spinners and Yes. Some of these have been nominated before but failed to be inducted and once again my pleas that Richard Thompson be among the names has been ignored. I’ll keep banging on about Thompson’s merits to the anonymous board who choose the nominees until I get fed up of listening to ‘1952 Vincent Black Lightning’, ie until I croak.
In the past the R&RHoF has been criticised for its American bias and, in particular, an antipathy towards British prog and HM/hard rock, but the inclusion of both Deep Purple and Yes seems to imply that they’ve heeded the grumblings from this side of the pond. Either that or they’re running out of names.
So who to vote for? Last year I mistakenly believed that The Smiths would be a shoo-in but they didn’t make it. So they’re a definite. I wrote a book about Deep Purple and even though I sort of ‘grew out’ of that kind of music in my late twenties I feel a sense of loyalty towards a group with whom I was once quite friendly, so they’re my second choice. Much the same thing applies to Yes, with whom I also had an acquaintance in my youth, and right now I’m in discussion with Steve Howe for his autobiography. I’m also pally with his daughter-in-law Zoë Howe who has written some great books for Omnibus Press, so I’m going to give in to nepotism and add them to my choices. I suppose I’m also being patriotic, selecting the only three British nominees, but that wasn’t the intention. More interestingly, it occurs to me that in all three cases there will be issues with regard to which members of these groups will line up on the podium should they win. Morrissey can’t stand Smiths drummer Mike Joyce, Ritchie Blackmore seems always to be at loggerheads with someone or other in Deep Purple and there have been so many members of Yes over the years that they could probably make up a rugby side.
It now becomes tricky. The music of several of those that remain has given me pleasure over the years, some more than others. The Los Lobos album By The Light Of The Moon was once a big favourite of mine and still gets an airing at least once a year. Chic made disco respectable and who can doubt Nile Rodgers credentials? Chaka Khan is ‘Every Woman’ and not a girl I’d mess with. The JBs were tighter than the flap on Rod Stewart’s wallet and, because they are no longer in the first flush of youth, deserve to get in. Steve Miller is the joker in the pack and seems to have had a good influence on Paul McCartney. Trent Reznor plays it like he means it, and The Spinners sang some good tunes. As for the rest, well, The Cars passed me by somehow, I thought Chicago’s first album was ok but thereafter they became as dull as dishwater, Janet Jackson has plenty more years to get in and try as I might I’m not into rap.
Which leaves Cheap Trick whose Live At The Budokan album was never far away from my turntable at the end of the seventies, and even now brings a smile to my face whenever one of its tracks crops on of the iPod (especially ‘No Surrender’). Many years ago I saw them at Hammersmith when the venue there was called the Odeon and before the show I’d been invited into the backstage bar for a beer or two but then got hopelessly lost in a maze of corridors on my way to the auditorium. Thinking it might lead there I went through a door blindly and found myself in an anteroom where the four members of Cheap Trick, whom I had never met, were in a pre-concert huddle, no doubt psyching themselves up for the gig. They all looked up and stared at the intruder. “Er, have a good show, lads,” I spluttered. “Thanks,” they said, in unison. So they get my vote for not telling to get the fuck out of there.
Which makes four. So who gets my final vote? I’m undecided. So, as I did last year, I’m appealing to Just Backdated readers to add their fourpenneth. All opinions considered.
Posted by Chris Charlesworth

Is there any way you can get Nicky Hopkins inducted in the sideman category? And this American prefers the Cars way over Steve Miller.

I'm on board with all of your picks so far Chris. Yes and The Deep are no brainers. I see the choices for the last spot coming down to Steve Miller, The Cars and Cheap Trick. Miller had a helluva run in the late 70's as well as The Cars. Cheap Trick has those few iconic songs but I say the Cars has set themselves apart with there brand of unique sound that came out. One of a kind when you throw in the significant amount of keyboards similar to Lords keys with Purple. It made both of there sounds unusual and earworthy! The Cars!

Completely agree with your picks, Chris. Here's hoping Richie shows up with the band and not minstrels, elves, and fairies... For the final pick, I vote Los Lobos. Liked their debut song "Will the Wolf Survive" (1985). Really liked 1991's Angel Dance. Absolutely LOVE their new song "Made to Break Your Heart ". That's consistency. That's longevity.

I was with friends this week, two of whom are, like you, 'judges' in this tricky equation. The names came up. Yes, Deep Purple - are they not in already? Chic, OBVS. NWA - someone said a must, especially since Get Outta Compton movie. Los Lobos, very, very tricky, maybe in 2020. Cheap Trick, A NO BRAINER, got to be in. The Cars, the jury was out, but maybe yes, if Cheap Trick is in. The Smiths? Some said yes. Janet Jackson? You could hear the LAUGHTER from Bishopsgate. Chaka Khan OBVS, as I recall. The (Detroit) Spinners - what took so long? But only if THE DRIFTERS are in. Chicago, only if Traffic is in. Nine Inch Nails, see Los Lobos, despite Hurt. Steve Miller - Who He? And how on earth can there be any fucking doubt, which roundly brought us to the question, who asks these ridiculous questions?

Steve miller has given more to music over many years than most of the competition. Certainly the likes of the Cars...

May I make a case for Chicago, and not because I'm from there. I agree that their early work is more interesting than what became almost easy-listening pop. But I believe they have sold more records than any other American group besides the Beach Boys, so somebody must like them. They, along with Blood, Sweat and Tears, introduced horn sections to rock. And they certainly are better musicians than Kiss.

Thanks everyone. The jury is still out. I have until mid-December to send in my vote, so keep 'em coming. Smiths, DP, Yes and CT get it so far. Who will be by fifth?

Steve Miller hopefully, Chris. I know it's all very subjective but it's incredible to think he's not already there. Where can one view the complete list of all members? Ah yes, here: https://rockhall.com/inductees/alphabetical/
I see the Beastie Boys are in, that's comforting.