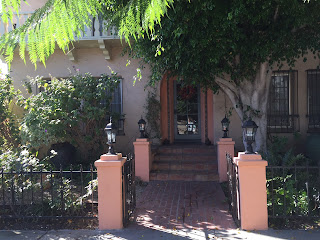 Research conducted by my friend Fawn Hall in the West Hollywood area of Los Angeles has revealed that I lived at 8812 Rangely Avenue when I worked as Melody Maker’s American Editor in LA between September and December 1973, following a month at the Chateau Marmont Hotel on Sunset Boulevard. Being of a sweet and generous disposition, Fawn has sent me a few photographs of the building, though it took us a few weeks to locate it but because she lives nearby and walks her small dog around the neighbourhood on a daily basis it wasn’t too onerous a task to take pictures of several buildings on the south side of Rangely until she came up with the right one, as identified by yours truly. 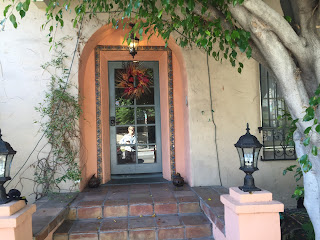 The building was divided into four apartments and I occupied the one on the top right, sublet from the singer Phil Ochs through his brother Michael who at that time was the publicist for Buddah Records. Michael, of course, would go on to launch the photo agency Michael Ochs Archives which is now owned by Getty Images. 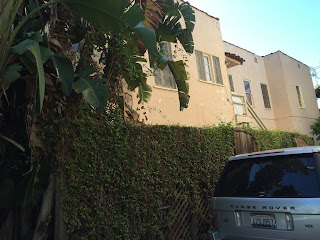 The side view. The flight of steps led up to my kitchen. The window at the top right was my bedroom.

Fawn is the widow of my old friend Danny Sugerman, the writer who worked for The Doors for much of his life, eventually becoming the nearest thing they had to a manager in the years following the death of Jim Morrison in Paris in 1971. In 1988 Omnibus Press published his book The Doors – The Illustrated History, a collection of photographs and press reports about the group but Danny is probably best known for having co-authorised with Jerry Hopkins No One Here Gets Out Alive, the best-selling biography of Morrison that was published in 1980 and did much to resuscitate the fortunes of the Doors thereafter. Danny also wrote a balls-to-the-wall memoir called Wonderland Avenue: Tales Of Glamour And Excess (1989) that Fawn tells me has been optioned for a film treatment, to be produced by the noted director David Fincher (Fight Club, Gone Girl, The Girl With The Dragon Tattoo etc). 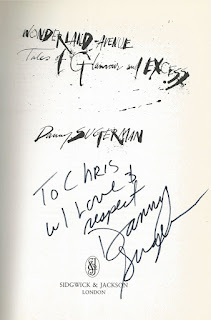 I had a few intemperate adventures with Danny when I lived in LA, and the last time I saw him was in 1994 when I was sent there to ease the transfer of the Doors printed sheet music rights in the direction of Music Sales, which I somehow accomplished over lunch at the swanky Four Seasons hotel where I stayed for three nights, sleeping in a bed that could comfortably accommodate four persons of average size. Danny had married Fawn in 1991 but, sadly, he died from lung cancer in 2005, leaving her to manage his literary estate which she does with due diligence, as lawyers put it.
So my thanks to Fawn – she can be seen in the middle photo, reflected in the glass door of the building – for sending me these pictures from Rangely Avenue, which remind me of a particularly eventful period of my time on Melody Maker, all of which seems slightly surreal to me nowadays. I write about my time in the apartment on Rangely Avenue in these posts on Just Backdated here:
http://justbackdated.blogspot.co.uk/search/label/Phil%20Ochs
and here:
http://justbackdated.blogspot.co.uk/2014/07/melody-maker-in-1973.html