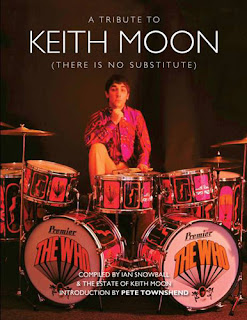 Any day now Omnibus Press will publish A Tribute To Keith Moon: There Is No Substitute, compiled by Ian Snowball, designed by Who designer Richard Evans and produced in association with the Moon Estate, headed by Amanda De Wolf, Keith’s daughter. ‘There Is No Substitute’, of course, is the inscription on the plaque at Golders Green Crematorium where Keith’s last rites were held, on September 13, 1978.


With an introduction by Pete Townshend, the book is chock full of contributions from fellow drummers, Keith’s friends and Who fans. Focusing as much on Keith’s extraordinary talents as a drummer as his notoriety as a prankster, the book reflects the deep affection that this madcap genius inspired amongst all those with whom he came into contact.


Packed with photographs, many previously unseen, the interviewees include fellow drummers like Kenney Jones, Rick Buckler, Carl Palmer, Mick Avory, Max Weinberg, Don Powell, Clem Burke and many more, as well as other musicians like Jack Bruce and ‘Legs’ Larry Smith, various Who associates and some who’d known Keith since before he was famous.


Among the latter is John Schollar, the rhythm guitarist in The Beachcombers, the Harrow-based group for whom Keith played drums before he joined The Who. Keith was a Beachcomber for almost 18 months, from December 1962 to April 1964, and after he left John maintained his friendship with him though all the turbulence of The Who years, right up to the end. After Keith’s death John continued to visit Kit, Keith’s mum, on a regular basis, and he recalls Kit telling him in the eighties that if Keith had remained in The Beachcombers he’d still be alive. Kit, incidentally, is still alive, aged 95, now cared for by her daughter Leslie.
John Schollar’s contribution to There Is No Substitute is among the most poignant in the entire book, and I’ve reproduced it below. John also sent me the photograph below which wasn’t used in the finished book; taken at the Kodak Theatre in Harrow, probably very in early 1963, not long after Keith joined The Beachcombers. “He brought the gold lame suit with him,” John told me last night. “He’d worn it in his last group but he soon wore out the trousers, couldn’t sit still could he?”
From left to the right The Beachcombers are John Schollar, Moonie, Tony Brind on bass, singer Ron Chenery (aka Clyde Burns) and lead guitarist Norman Mitchener. The picture was taken by their friend Roger Nichols who drove the group from gig to gig in his van. 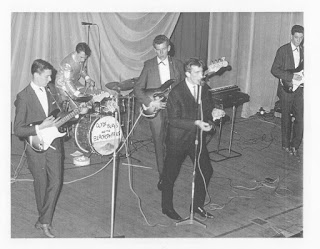 “I grew up in an area not far from Wembley, where Keith grew up. Most of the early Beachcomber gigs were in venues in that area. We had a drummer, but he wasn’t really up to scratch, so we kicked him out and auditioned a few drummers. Keith was one of them and he was just superb. He was also very young, I don’t think even sixteen, but when he started playing we all looked at each other and knew he was something special. For a little bloke he produced so much energy and noise. And he made the most of what kit he had. Even with us he rarely used a hi-hat.

Email ThisBlogThis!Share to TwitterShare to FacebookShare to Pinterest
Labels: Book Extracts, The Who (Keith)

(VIDEO) Get your ex CRAWLING back to you...?