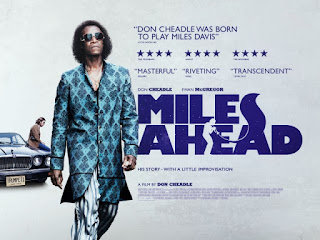 Back in the autumn of 1970 the phone rang on my desk at Melody Maker’s offices on Fleet Street and, to my surprise, on the other end, calling from New York, was Miles Davis, asking to speak to Chris Welch. I passed the phone to Chris who took it with a look of apprehension, like the protagonist in ‘Worried Man Blues’.
“We spoke for quite a while,” confirms my old friend and colleague. “Miles was upset at my review of his performance at the Isle of Wight festival which I thought was embarrassingly awful. Terrible jazz rock made worse by his posing as a rock star. I was cross with Miles because his real music was so much better. But I never expected him to read MM. After a long complaint, he said, ‘I’m going to leave CBS’.”
I was reminded of this strange exchange last night as I watched Miles Ahead, the quasi-biopic of Davis directed by Don Cheadle who co-wrote the screenplay and takes the starring role. Miles never did leave Columbia, or CBS as the label was known in the UK. But he did have his ups and downs with the label, as the film makes abundantly clear.
Judging by the wardrobe, the film is set in the mid-1970s although there are flashbacks to the 1940s when Davis was in his pomp and courting the gorgeous dancer Francis Taylor (Emayatzy Corinealdi), the muse he clearly still adores. Thirty years on and Davis is a reclusive, drug-addled nowhere man, a volcano of fear and paranoia who answers a knock on his door from Rolling Stone writer Dave Brill, played occasionally and, I thought, inappropriately, for laughs, by Ewan McGregor, who is seeking an interview. Thus ‘Dave’ finds himself caught up in the crazy world of Miles Davis, in which guns and car chases play an important role in their quest to track down a tape recording of recent sessions that Columbia wants to release and which, with Dave’s connivance, has been stolen from Davis’s apartment.
All of which is exciting to behold and mixes plenty of drama into a movie that I thought would be more biographical than it was. I don’t know how much liberty has been taken but since I never encountered a Rolling Stone writer called Dave Brill during my stay in New York, which coincided with the period in which the ‘reality’ part of the film is set, I am assuming this story line is pure fiction. Nevertheless, I’m inclined to trust the authenticity of Cheadle’s top-class portrayal of the great trumpeter, a performance that dominates the film in every aspect. Davis was a proud but difficult man, barely in control of his life, brought down by heroin, racism and the certain knowledge that the music he made after the mid-sixties wasn’t what his audience wanted or appreciated, a dilemma that has almost certainly led to problems other star musicians have faced when that star begins to fade. All of which might suggest that Davis is a violent brute but this doesn’t stop us rooting for him as he chases his tapes through the mean streets of New York, gun in hand and sidekick Dave at the wheel of his speeding Jaguar.
While this aspect of the film seems a bit too much like every other cops’n’robbers movie, it is counterbalanced by some outstanding musical scenes, either in a studio or on stage, almost all of which are from the earlier period, and in which Cheadle as Davis is joined on stage by a host of illustrious jazz musicians. The continuity between the two eras shifts cleverly as scenes are juxtaposed on the crash of a cymbal or the blast of a trumpet, the only issue with this being that – his receding hairline aside – the young Davis doesn’t seem to have aged anything like 30 years by the mid-1970s. Nevertheless, Cheadle’s portrayal of Miles as the fighting underdog, smoking incessantly, barely audible in his hoarseness, desperate to prove he’s not a has-been, is immensely powerful.
In the end the tape is retrieved but I won’t spoil the fun by saying what it sounds like. Sufficient to say that my old pal Chris Welch was probably lucky that in 1970 the real Miles Davis was calling him from New York and not a pay phone in Fleet Street.