TOMMY – A Bluegrass Opry by The Hillbenders 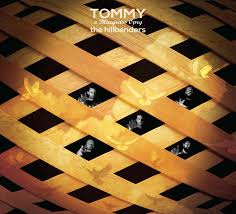 Forty-seven years ago today saw the release of Tommy, the first and – to my mind – still the best rock opera recorded by anyone, and that includes Quadrophenia which runs it a close second. There have been many subsequent interpretations of Tommy, including three – Lou Reizner’s orchestral LP, the film soundtrack and the stage musical – in which The Who, or individual members of the group, took part, not to mention live versions, or extracts thereof, released by The Who themselves, on Live At Leeds, re-issues of Tommy and various other live albums. I’m sure there’s many more versions out there that might not have come to the attention of The Who though I’ve yet to learn about Tommy – The Ballet, but it’s not beyond the realms of imagination to visualize a line of rake-thin tu-tu clad ballerinas pirouetting around the deaf, dumb and blind one leaping across a stage in tights.

A couple of weeks ago I came across a poster for a bluegrass version of Tommy to be performed live by an American quintet called The Hillbenders at the Union Chapel in Islington in North London. I took a picture of the poster and posted it on FaceBook which prompted FB followers to steer me to a CD which has actually been on release for just less than a year now, so I’m a bit surprised I hadn’t found out about it before. I’ve been playing this on and off for a couple of weeks now, on the iPod and in the car and once I got over the shock of listening to Tommy without any drums, I’ve concluded it’s definitely a worthy addition to the Walker family.
The cover is an almost true facsimile of Mike McInnerney’s original blue cover for The Who, except that the cross-cross lattice on the front is made from what looks like wood, as befitting this acoustic recording. Within the lattice are the five members of The Hillbenders, guitarist Jim Rea who also arranged the piece, mandolin player Nolan Lawrence, dobro player Chad Graves, banjoist Mark Cassidy and stand-up bass player Gary Rea. All five handle the vocals, sometimes individually, sometimes as a choir. They are based in Springfield, Missouri.
The five clearly revere The Who as the arrangements hardly vary from The Who’s original. There are 23 tracks, one less than The Who, ‘Underture’ presumably omitted because they felt unable to do it justice without drums and, in any case, the basic score is the same as ‘Sparks’. Elsewhere, it’s uncannily similar to the Tommy we know and love, from the ‘Overture’ to ‘getting the story’ at the end of ‘We’re Not Gonna Take It’.
In many respects the stand-up bass makes up for the lack of percussion, though I think someone taps the body of an acoustic here and there, and I found myself warming to the two instrumentals – ‘Overture’ (taken at a frantic pace) and ‘Sparks’ as much as anything, as well as the dobro/banjo solo in ‘Acid Queen’. Guitarist Jim Rea follows Pete’s lines closely, on acoustic of course, and the rapidly picked banjo throughout seems perfectly natural once you’ve got your head around the fact that this is a bluegrass interpretation. The guitar/banjo opening on ‘Pinball Wizard’ is particularly effective. Towards the end, as one of the quintet offers up Roger’s ‘See Me Feel’ plea, it verges on the operatic, and when all five chime in on the closing lines – ‘Listening To You’ – the banjo speeds up like an express train.
Dedicating their record to ‘the power of The Who’, The Hillbenders are clearly in awe on them and their Tommy is without doubt a respectful tribute, in homage to them if you like. On the internet I spotted a picture of Pete with the five guys so we can assume the creator of Tommy has given them the green light. They’ve done him proud.

"I’ve yet to learn about Tommy – The Ballet, but it’s not beyond the realms of imagination to visualize a line of rake-thin tu-tu clad ballerinas pirouetting around the deaf, dumb and blind one leaping across a stage in tights."

Allow me to enlighten you further. When I was in high school I took a date to see Tommy - The Ballet in Chicago. I was a bit disappointed that it was simply The Who's album played while the ballet corp strutted their stuff. Below you can see an entry from The Who This Month! of 4-2016.

"April 1971 - On the 2nd, Les Grands Ballet Canadiens premiere a ballet version of Tommy at New York's City Center. The performances take place while the 2 LP disc is played over loudspeakers. Clive Barnes in The New York Times finds it better than he expected but unremarkable."

I stand corrected. Thank you for that information Keith. Any pictures? CC