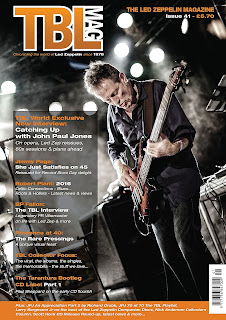 Perhaps because fame wasn’t to his taste, perhaps because – as the consummate professional – he regarded his employment between 1968 and 1980 as just another gig (albeit a very lucrative one) or perhaps because he thinks he has less to lose than Jimmy Page and Robert Plant, but John Paul Jones has kept himself largely to himself since Led Zeppelin called it a day in 1980. Truth is he’s the kind of rock star I’d like to have been, acclaimed for his musicianship, richly rewarded yet unrecognised on the street. When I worked at Music Sales John Paul would come into our offices from time to time to meet with his publisher on the 5th floor, usually dressed in jeans and a scuffed jacket, and tell me whether or not the tube was crowded. The tube? Page and Plant are less likely to be seen on the tube than senior members of the Royal Family, unless of course they’re opening a new line named after them.

So it’s nice to see the eternally modest John Paul on the cover of the latest Tight But Loose, Dave Lewis’ superior Led Zeppelin fanzine which arrived this week. Inside he talks about what he’s up to (with a brief mention of his work for Dave Rawlings, musical partner of the very wonderful Gillian Welch) and a bit about his past and his thoughts on his legacy. No one ever seemed to want to interview John Paul in my Melody Maker days and he didn’t seem to mind one iota, happy as he was to do his job properly like the craftsman he is, and go home afterwards. Nevertheless, when he does decide to talk he’s forthcoming, friendly and comes across as the Mr Nice Guy he's always been.
Of equal interest, at least to me because I used to know him well, is an interview with BP Fallon, the impish Irish PR who took on the Led Zeppelin brief around 1973 and hung around doing the same job on and off until 1980. Having previously worked for EG management (King Crimson, ELP, Roxy Music) and Marc Bolan, BP’s arrival in the Zep camp took most of us by surprise, not least because he didn’t share the aggressive tendencies associated with their management. In the event this was a bonus. Already well liked by the press for his laid-back otherworldliness, BP was ideal for easing the rather touchy relationship between band and media that developed after the merits of Led Zeppelin III came under scrutiny in 1970. 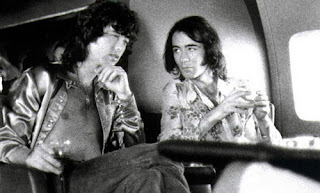 Jimmy Page with BP Fallon aboard the Starship in 1973, photo by Bob Gruen

Whenever BP rang me up with some news about a client he would open the conversation by announcing: “Hey man, I need to lay a verbal on you.” He never ceased to fascinate, to intrigue. Nevertheless, like the eternally absent-minded Simon Puxley with Roxy Music, PR for BP was really just a hook on which to hang his hat. His real skill was advising his clients on how best to present themselves to the world, and in so doing to engender sympathetic media coverage at a time when the UK music press was becoming far less deferential towards the artists that peopled its pages. When Bolan was in danger of becoming a trifling teen-idol, BP gave him integrity, and when Led Zeppelin appeared too high and mighty, BP did his best to present them as humans, not quite cuddly but certainly less belligerent than their reputation suggested. Also, there was an obvious affinity with Jimmy Page; both of them small, dark and a bit mysterious, sometimes whimsical, sometimes deep, and both of them powerful magnets for immensely attractive women. After Zep BP went on to work for U2 for a spell, wearing a laminate that read: ‘Guru, Viber & DJ’ – a perfect job description really.
Elsewhere Tight But Loose contains the usual news of what Page, Plant and Jones have been up to, information about records, gigs (including a Deborah Bonham Band show at which Plant got up to sing ‘When The Levee Breaks’ and ‘Shakin’ All Over’) and bootlegs, opinions from fans and everything else the committed Zep fan needs to know. It’s also nice to know that the three men who inspire the magazine’s success and continuing existence now so appreciate the work that Dave does on their behalf that they are happy to support it in the way they do.

Good review - thanks. I expect my copy of this issue to be in my mailbox here in the US sometime this week.