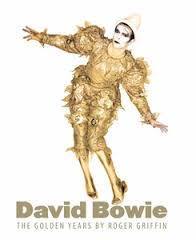 The loss of David Bowie was always likely to inspire a slew of books about him that would not otherwise have been written. Amongst them were Paul Morley’s The Age Of Bowie which I ignored after my friend Johnny Rogan dismissed it as ‘a dog’s dinner’ in his review in The Irish Times* and Lesley-Ann Jones' rather melodramatic Hero: David Bowie which began and ended very well but I felt was let down by certain omissions and the author’s tendency to inform readers about things before they’d happened, thus interrupting the flow (not to mention the spurious claim that Bowie’s mother had worked in the sex trade, an allegation that ensured the book got plenty of press, albeit of the wrong kind). Both books clearly suffered through being written hastily to meet unreasonable deadlines.
For my money the two best text-led biographies of Bowie remain David Buckley’s lengthy Strange Fascination, an updated and revised edition of which has occupied the author for much of this year, and Paul Trynka’s more compact but less affectionate Starman.
I ought to have published Strange Fascination myself and would have done so had not Virgin Books outbid Omnibus Press. Additionally, there was an issue with regard to David Bowie’s own feelings towards the book. At the time the book was being pitched, Music Sales, Omnibus’ parent company, were in talks with Bowie’s management about song publishing matters and it was felt that it might rock the boat if Omnibus Press were to publish David Buckley’s ‘unauthorised’ book. In the event this was probably erring on the side of caution as Buckley’s 1996 (Omnibus) book on Bowie, The Complete Guide to the Music of…, was favourably received by the great man, so much so that he chose to privately publish his own edition as a promotional tool for his Earthling album in 1997.
As it was, the best Bowie book that Omnibus published during my time as editor was probably Bowiestyle, by Mark Paytress, a large format, heavily illustrated book that eschewed the biographical approach in favour of examining Bowie’s influences and the way he has influenced others. Published in 2000, it remains in print, superseding to an extent the David Bowie Black Book, first published in 1981 and also still in print. Originally written by Barry Miles, my predecessor as Editor at Omnibus Press, I updated it twice which explains my co-author credit. It was among the first illustrated ‘coffee table’ style books on Bowie, a huge seller at the time in a market that in 1981 had yet to become saturated.
There were other Omnibus Press Bowie books in the meantime, among them early manager Kenneth Pitt’s fascinating Pitt Report, and Bowiestyle and the Black Book have now been joined by a third coffee-table book from Omnibus entitled David Bowie: The Golden Years by Roger Griffin, an even more sumptuous volume that the publishers believe reflects the attention to presentation that was so important to its subject. Early Amazon reviews indicate it is being appreciated by fans for its attention to detail, lavish photography and superior design.
I should point out that this book was commissioned long before Bowie left us. I had a hand in it, of course, and can reveal that its production was seriously compromised by David’s passing. Many of the photographers whose pictures were to have been included either withdrew their permission to use them or decided to triple the fees they would otherwise have charged. It was Omnibus’ original intention to publish this book in time for Christmas 2015, but when this didn’t happen – books like this, which are nowadays printed in the Far East, invariably encounter delays – we scheduled it for the spring of 2016. Then came the sad news, and a rethink. The result is a ‘spare no expense’ attempt at producing the ultimate Bowie memento.
The Golden Years, of course, were the seventies, and Griffin’s book is a comprehensive and scrupulously precise chronology of David’s moves and grooves between January 4, 1970 (a gig at the Beckenham Arts Lab) and December 15, 1980 (the release of a K-Tel Best Of Bowie compilation). In between are details of every record released, every concert performed, every TV and radio appearance, every recording session, the films, the interviews, the collaborations, the off-stage shenanigans, the travel, the contretemps, and the socialising, just about everything that David Bowie did in those 3,652 days, together with hundreds of photographs, many reproduced to full bleed to take advantage of the large format. It is 450 pages of day-to-day diary entries, the whole package enhanced with gold leaf blocking, a hardback that weighs over 6lbs, so if you buy several take them home separately.
It is my belief that time and distance add gravity and that it will be a long time before the definitive David Bowie biography is written. It is an undertaking that will take years of scrupulous research, two hundred or more new interviews with those once close to Bowie, and a slow and methodical approach to the project. I hope that out there is a biographer who is to David Bowie what Mark Lewisohn is to The Beatles, perhaps a literary scholar and Bowie fan who was maybe too young to have been watching Top Of The Pops on July 5, 1972, but who understands what that moment meant and can bring to his or her book the same mix of profundity and sparkle that we recognised in Ziggy. I give it five years.

One area that has never been properly covered is Bowie's sexual relationship with Lori Maddox and Sable Starr, both of whom were 13 at the time. It seems to be an area that Bowie fans do not want to hear or read, or have tried to cover up

I recall commenting on Paul Morley on another of your blog entries. How he made an early Channel four programme on Eno which turned out to be merely a showcase for his own pretentiousness which held nothing but disappointment for a young Eno fan who had been relishing the prospect of seeing his hero on the box.
After reading the Rogan review it seems that Morley is as self-obsessed and pretentious as ever.

Start following our signals right now and gain up to 270% per day.