TIGHT BUT LOOSE – Portrait of the Singer as a Young Man 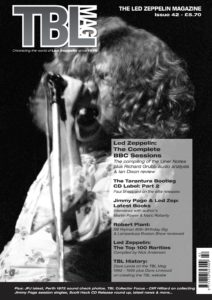 The evolution of Robert Plant from prancing stallion to grizzled old rock warrior is something to behold. The photograph of Led Zeppelin’s front man on the latest issue of Dave Lewis’ Tight But Loose fanzine brings back memories of the youthful Plant as he was in 1969, a few weeks shy of his 21st birthday, hungry, passionate, perhaps a bit shell-shocked that so much had happened in so short a time and, above all, relishing in the sheer wonder of having musicians of the calibre of Jimmy Page, John Paul Jones and John Bonham backing him up as he sang. Once he grew a beard, let alone after he shaved it off for the first time, it was never quite the same but in ’69, there was something decidedly feral about him, like a big cat gnawing on the songs he sang. Offstage, however, he was a slightly green middle-class English boy, raised not to drop his (h)aitches, as nice as pie, perhaps a bit unsure of himself, quite unlike the cultured, well-travelled Page, the experienced session-hand Jones and boisterously blue-collar Bonham.
Most great groups take a year or two to get into their stride but Zeppelin was the Usain Bolt of rock, at full strength straight off the starting block, and the image of Robert on the front of this latest TBL caused me to do a double take. His hair covers his face and he looks like he’s about to fellate the microphone, so for a second or two I didn’t recognise him. Then I looked again and noted that the picture came from the Royal Albert Hall, June 29, less than a year after their first rehearsal, about one year before I first saw the group. They’d had a busy week that week with shows in Newcastle (June 20), Bristol (21), London (24, a BBC recording), Portsmouth (26), London (27, a second BBC recording) and the Bath Festival the night before, so they would have been at Olympic fitness. They actually did two shows at the RAH that day, and two other groups played before them each time, which suggests their set was short, not much longer than an hour, a handful of songs from the first album and a finale that evidently climaxed with Little Richard’s ‘Long Tall Sally’ for which the supporting groups joined them on stage – havin’ some fun tonight indeed.
But I digress. I was going to write about the contents of the new TBL but became side-tracked by its front cover. Indeed, I ought to have opened this little piece with my thanks to Dave for the fulsome coverage of No Quarter: The Three Lives Of Jimmy Page by Martin Power, a book I had a hand in, which occupies three pages of TBL 42, and I’m happy to say Dave welcomes it warmly.  Dave points out that it is comprehensive (622 pages) but not salacious, a deliberate editorial stance agreed upon by the author and myself when the book was commissioned. You can find plenty of that in Hammer Of The Gods, Richard Cole’s Stairway To Heaven and Barney Hoskyns Trampled Underfoot, not to mention memoirs by the likes of Pamela Des Barres and Nick Kent, so Martin and I agreed he should go easy on the sex and drugs and concentrate on the music, of which there is a great deal, and not just LZ. I have reason to believe that a work in progress by a former NME writer of some distinction will not be quite so discriminating.
Taking pride of place in this issue of TBL is Dave’s take on LZ’s Complete BBC Sessions, for which he wrote liner notes, thus elevating him to the same role that Mark Lewisohn attained with The Beatles on their reissue series and, to a lesser extent, my own participation in Who reissues from the mid-nineties. It is pleasing to note that the time and effort that Dave has put into helping Led Zeppelin maintain their profile 37 years after they called it a day, not to mention the knowledge he’s amassed along the way, has been recognised in this way. As far as I am aware he is the world's only full-time professional Led Zeppelin archivist. Groups, even those as sturdy as Led Zep, need fans like him.
Elsewhere there’s a feature on collecting singles on which JP played without credit, including such disparate names as Val Doonican and Brenda Lee, a low down on the Top 100 most valuable LZ albums, the usual info on bootlegs and the like, news on recent Page, Plant and Jones activities and a report on the ‘Stairway To Heaven’ court case which went the way TBL hoped it would: “Reason prevails,” observes its editor sagely.
Posted by Chris Charlesworth