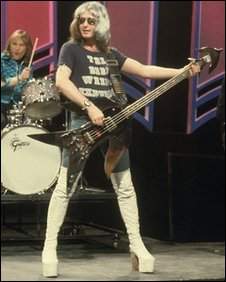 RIP Pete Watts, bass player in Mott The Hoople, whom I knew quite well back in my Melody Maker days, at least until the group fragmented after the departure of Ian Hunter. Overend, an unusal name with Welsh origins, was always friendly, down to earth, a great big tall geyser (especially in those ludicrous platform boots that he wore on stage) who sometimes dyed his hair silver and played a weird-shaped bass that had been specially designed for him. Like the rest of them, he was an honest toiler at the coalface of rock, modest and unassuming, with a droll sense of humour drawn from the knowledge that his band was never likely to top the Premier League but, with the wind in their sails, could rock up a storm on a good night.
Mott taught me a lesson, albeit unintentionally. When I joined MM in 1970 I had naively assumed that any act worthy of coverage in the paper, ie one that had released an album or two and could sell out concerts, would be living the life of Riley, comfortably off and comfortably housed. Then I went to interview them at their communal flat in Earls Court where all bar Hunter (who lived in Putney with his American wife Trudy) lived. Well, it was a pigsty, truly awful, and it was a shock to realise that far from living the life of Riley the members of Mott The Hoople were probably worse off than me in terms of income and lifestyle. They were lovely guys but as Ian Hunter’s great book Diary of a Rock’n’Roll Star later confirmed, life in a rock band was only really comfortable for those at the top of the tree. The rest, as that visit to the flat in Earls Court confirmed, had a tough time of it, even if they did get their mugs in MM.
I wrote about MtH quite a bit in the early seventies but can’t seem to find any of my pieces on Rock’s Back Pages when I looked this morning. All I could find was a concert review from September 19, 1970 when Mott supported Free at Croydon’s Fairfield Hall, a show that sticks in my mind because Hunter encouraged a stage invasion that got slightly out of hand.
I wrote more about Free than Mott but here it is anyway: “Fairfield Hall, Croydon, has seen some amazing scenes since it became South London's home of rock, but I doubt whether the old faithfuls at the hall have ever seen anything like the excitement that Mott The Hoople conjured up on Sunday.
“With little more than an encouraging beckon from Ian Hunter, Mott's pianist and singer, over 100 excited fans leaped up on to the stage to dance along with the group during their finale, a medley of rock and roll songs from the fifties.
“Free had a difficult task in following such a performance, but they coped with the hysteria with a selection of numbers that have brought them to the forefront this year. They opened with ‘Riding On A Pony’ which could be their next single and included two songs from their forthcoming fourth album, ‘Be My Friend’ and ‘The Stealer’.
“For an encore they bounced through ‘All Right Now’ and – after some hesitation – came back for a second encore doing ‘The Hunter’.
“There can be few groups around where the bass lines play such an integral part in the overall sound. Little Andy Fraser moves around the stage like a toy that won't fall over, always getting the most from his four strings.
“The performance was recorded live by Island and – quality permitting – should be released on an album before Christmas. It will sell like hot cakes.”

I knew Ove (and Buffin) back in the early to mid-eighties when they were pursuing record production as an occupation. Buff was a house producer for the BBC and did a lot of sessions for John Peel and Kid Jensen’s shows.

I knew them well enough to visit their shared flat in Acton a fair bit and, to this day, I don’t think I’ve met two people who have made me laugh more than they did. Overend in particular with his, frankly libellous and unprintable, stories would have me and my pals in stitches for hours. He delighted in music biz gossip and was a dab hand at spreading it too. On reflection a lot of it was probably the result of his fevered imagination but he had a knack of making it sound believable.

I remember Ove telling me that when Mott first got a record deal with Island they were in a studio recording something or other and The Rolling Stones happened to be in the studio next door. At some point the members of Mott were sat around listening to a playback and Mick Jagger walks in. Mott are all hugely starstruck by Mick’s presence but somehow manage to act nonchalant as Mick sits down on a sofa next to Ove.

After a couple of minutes of listening to the music (presumably approvingly) but without saying anything Mick takes a puff on a joint he’s been holding and passes it to Overend at which point our hero can contain himself no longer. He leaps to his feet and shouts out in his mild Brummie accent “fookin’ ‘ell lads, Mick’s just passed me a joint!”

Upon which Mick promptly stands up and leaves (still without saying anything) leaving the rest of Mott cursing Ove for blowing their one chance of hanging out with a Rolling Stone.

That was Ove and Mott all over. Chris Hall who directed The Ballad Of Mott The Hoople, the (excellent) documentary about them, described them as Spinal Tap meets Last Of The Summer Wine. Great group and great fellows with it.

nice entries. I enjoyed their music before the fame and now live on those Acton flats. The freehold was in Overend's name for twenty years. it's their garden mural and massive electric outlet they had left behind that we now enjoy.