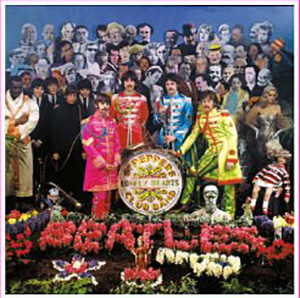 I read that the 50th Anniversary Edition of Sgt Pepper’s Lonely Hearts Club Band, due to be released on June 1, will include ‘Penny Lane’ and ‘Strawberry Fields Forever’. Someone has decided that since they were originally intended for inclusion, now is the time set matters aright. It never happened because they were issued as the A- and B-sides of a single earlier in 1967 and, in any case, the limited running time available on vinyl meant there wasn’t room. According to the Daily Mirror, back in 1967 fans were ‘furious’ that the two songs were left off Pepper.

Leaving aside the wisdom of this decision for a moment, what a load of absolute bollocks. There was no ‘fury’. I don’t even recall anyone being so much as mildly upset. I don’t recall anyone even considering that they might have been on the album. No one ever mentioned it, as my friend Chris Welch, a writer on Melody Maker at the time, confirms. Everyone simply assumed that ‘PL’/’SFF’ was The Beatles’ wonderful new single without any thought given to whether or not the songs might have been intended for an as yet unreleased album about which we knew nothing whatsoever. In any case, The Beatles were in the habit of releasing singles as separate entities to albums, an admirably generous practice long ago abandoned by the mercenary music business.
Newspapers are big on inventing ‘fury’. It’s a short, four-letter word easily absorbed into a headline. These days it’s usually right-wing pro-Brexit rags stoking up angst amongst their readers over delays in leaving the EU, or ‘massive’ benefits ‘handed out’ to those of whom they disapprove, like refugees, the LGBT community, drug casualties or unmarried mothers. It’s not usually the left-leaning Mirror over a Beatles story, but fake news is everywhere these days.
The only ‘fury’ I can see being aroused by this issue is whether or not it’s a good idea in the first place to include ‘Penny Lane’ and ‘Strawberry Fields Forever’ on Pepper. No doubt purists will, indeed, be furious, while others, younger fans with no loyalty to tradition, won’t care at all. I belong in the former camp and although I’m not exactly furious, after 50 years it will take a while getting used to a different sequence of songs on Sgt Pepper, and I don’t really want to either. Also, strictly speaking, if the argument for including ‘PL’ and ‘SFF’ is based purely on the fact that they were recorded at the same time as the Pepper tracks, or immediately before, then George’s dreary and forgettable ‘Only A Northern Song’ must also be included, which I’m sure no one wants at all. Finally, with the increasing popularity – and cost – of vinyl, how will they fit all three on to a 12-inch vinyl edition, if there is one?
No new Pepper running order seems to be available, not on The Beatles’ official website anyway, so anything you might read elsewhere is probably speculative. It is the accepted practice to place ‘bonus tracks’ at the end of the original sequence of songs, as we did with all those extra tracks on Who albums back in the nineties (apart from Leeds, of course), but somehow it’ll seem wrong for Pepper to end with anything other than the massive piano chord that concludes ‘A Day In The Life’ (aside from the gibberish). This was why we didn’t mess with the sequencing of Tommy or Quadrophenia – they are unified works, as is Pepper to my mind. Ditto Dark Side Of The Moon for that matter. Remember the fuss the Floyd made when it became known that DSOTM tracks would be available individually on iTunes?
In the event, of course, ‘Penny Lane’ and ‘Strawberry Fields Forever’ were included on the Magical Mystery Tour album, firstly in the US and subsequently in the UK when the original MMT EP was discontinued. This, I believe, is where they ought to stay.
Posted by Chris Charlesworth

Hear hear everything you wrote Chris. This is the reason why I bought and rapidly returned to Amazon, The Beatles' Love album a few years ago. It may well work as a Cirque de Soleil show but I don't want to hear all those great songs all jumbled up in a mad mash up of Beatle sounds stitched together by Giles Martin. I want them in the order they were on the original albums. And to add PL and SFF onto Sgt Pepper's is just wrong. Plus as I mentioned elsewhere the Mirror write such a lot of bollocks. I never heard a complaint from anyone about these two tracks not being on the album. As you so rightly said, there was no f****g room on the record.

Actually I quite liked Love, which had a function, but this doesn't and is a step too far. Glad you agree with me.

I remember being confused that PL and SFF weren't included on any album. I don't remember ever being "furious."

I could see bundling PL and SFF as a separate 7" in some kind of expanded edition or making them available as bonus tracks on a blu-ray. Messing with the original running order of Sgt. Pepper? Sacrilege.

As everyone knew (and probably knows) it was Beatles policy not to include ANY singles on albums. I seem to remember only Revolver was the exception to the rule (not counting their debut and choosing to ignore Klein's later judgements).

I've grown to really dislike the whole bonus track thing. For me it ruins the experience once felt. Albums no longer end where they were designed to end.
future stereo re-issues will correct the speed on She's Leaving Home, a fault since 1967 from which the superior mono release does not suffer. McCartney has always said "You haven't heard Pepper unless you've heard it in mono". I agree. Especially true of Revolver also.

Spot on. And it has to be the mono version. I might, however, be tempted by a [mono] remix from the original four-track tapes a la Yellow Submarine a few years back.

What could perhaps work is an extra disc of finished songs and demos written and recorded around the Sgt Pepper sessions including the much vaunted experimental track Carnival Of Light.