THE WHO IN LAS VEGAS 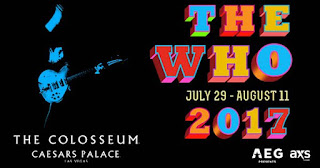 Hope I die before I get old...but a man's gotta eat, eh? So bugger off mate

Multi millionaires like Pete and Rog hardly have to worry about going out and play in order to put crumbs on the table.

No doubt he'll call them 'overrated' if they say anything rude about him.

Didn't they once have an album called 'The Who Sell Out' - maybe they're just fulfilling a promise and, BTW, it's 'DAMN' not 'dam' when used in that context! (still have editing in my blood!)

The band finished for me in 1978. They are just a tired money machine. It s not rock and roll. ! Enuff said

Next Pete said something to the effect "But we wouldn't want a Who fan in the White House, would we?"

They did play a short residency at the Red Lion pub in Leytonstone High road, which a lot of good bands played, 1965. Anyway more to the point, I am a bit stunned by this also and never expected it. The Who On ice again ? I think you're quite right,this was what they rebelled against and it really is a lowering of their standards to do this....woe is me.

I received the same email. My first reaction was overwhelmingly negative. But I've mulled this over a couple days and I'm willing to grant that this is a reasonable accommodation for age and the rigors of touring. Roger's not in the best health, who knows what's going on with Pete. I'll cut them a bit of slack on this.

Thanks for your post Chris. I agree wholeheartedly. Sad but true.

It makes perfect sense to set up in one place and have your audience travel to you. Pete and Rog have both commented that it's the travelling that's the most challenging aspect of touring nowadays.

It's a great venue and from personal experience last year it was clear that they enjoyed the place and the audience enjoyed seeing them in such a (comparatively) intimate venue.

It's far from a cabaret venue and if you look up and down the Vegas strip you'll see younger artists taking up residencies (albeit not as important musically as The Who are to us).

Also...I'm sure the money will be very good.

Saw Rod Stewart there this time last year. A great show but not rocknroll as we know it. More like Rod: the Musical.

But then the RnR Hall of Fame, the Hard Rick Cafe.... the Who are far from the only sellouts.

I'm sorry, I just have no problem with this. 13 days, what's the big fucking deal? At least they'll be back in the US