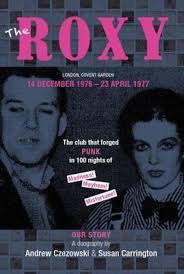 On December 14, 1976, after a brief stint as the first in an endless stream of optimists who tried to manage The Damned, Andrew Czezowski, together with his partner Susan Carrington, opened the Roxy club at 41-43 Neal Street in Covent Garden. “It was a right old dump,” says Susan of the venue that would become the launch pad for punk rock in London. “The toilets were really disgusting too. The funny thing was, I thought, ‘Wow, this is fantastic.’ I felt such a sense of excitement to think we could bring this sad old place back to life again.”

It was a brave move, punk being derided by just about everyone apart from the punks themselves, and their venture lasted precisely 100 nights, until the following April when it all fell apart in an ugly exchange of opinions with their landlord and sundry other malfunctions that plague all rock clubs regardless of the music they present. Andrew and Susan would go on to open The Fridge in Brixton, a wildly successful club that became world famous, initially for the first wave of New Romantics and then, for far longer and far more significantly, as the cradle of the UK rave scene wherein they originated the concept of the chill-out room. But it was the Roxy that got them started, and it is the Roxy that is celebrated in their book Our Story, published privately by them a few weeks ago and in which your man at Just Backdated has a minor interest in that it was designed by my better half and, since it was sitting on our computer, I took the liberty of advising Andrew on a few legal matters, not that he took a blind bit of notice.
This isn’t surprising for the court summons that is reproduced on page 136 doesn’t seem to have worried him too much either. This is but one of scores of illustrations throughout a 144-page, large format book, essentially a day-by-day oral history of those 100 nights, as told by Andrew & Susan, together with many others, including musicians, who passed through its forbidding black door. Happily, none of them gild the lily, and this lack of rose-tinted nostalgia makes the book not just exceedingly readable but often wryly amusing. Andrew and Susan describe what went on in the Roxy exactly as it happened, and since both kept diaries and never seem to have thrown anything away the refreshing lack of hindsight makes it essential as a historical record.
The matter-of-fact delivery is also rather endearing. Take this entry from Susan’s diary for January 22, 1977: “Four thugs posing as the Drug Squad robbed us and locked us in a cupboard. Luckily we were able to smash through the stud partition office wall and climb into the kitchen. Lost over £200, no money for drinks. The Stranglers and The Cortinas were great.” Or this one, from March 9: “Captain Sensible was as stupid as ever throwing pies. Sid Vicious shoved a quiche Lorraine tart in Billy Idol’s face. A small fracas broke out, heh heh! The whole thing was very pleasant.”
But behind the humour, intentional or not, lies a more profound explanation of why the Roxy was influential, and why the music was perhaps only tangential to its social significance. As the book makes clear, at the Roxy you be who you wanted to be and no one gave a damn. Boys and girls could behave as they liked, dress how they liked, in bin liners if they chose, wear their hair how they liked, pair off with whomsoever they liked, and no one would look askance. It was devoid of politics, a place for outsiders, for those belittled by conventional society, the misfits and the disconnected, where girls could relax without fear of unwanted male attention (or at least give as good as they got), and where boys could escape the relentless pressure to conform to masculine stereotypes. It was liberated in the sense that once the black door closed behind you, the rest of humanity ceased to exist. In keeping with this ethos Susan chopped off her conformist long blonde hair and dyed the spiky stubble that remained reddish brown: the before and after photos of her in the opening pages of Our Story speak a thousand words.
The book contains lots of press cuttings (Sounds magazine really was punk’s in-house journal), correspondence, contracts and flyers, the latter all designed in the familiar DIY cut-and-paste punk style that often featured pictures of the royals for contrastingly shocking effect. There are also plenty of photos, many of them slightly blurred since Andrew and Susan evidently feel that an unseen but off focus shot of a lesser known band is more appropriate, more atmospheric, for their book than a cleaner professional shot of a better known act. They are right. This isn’t intended as a flashy coffee-table book, it’s a record of how it was, unglazed, with all its untidy splendour exposed for all to see. In this respect, the dark grey cover with its overcast photo of Andrew and Susan is perfect.
“I look at the 100 nights of the Roxy as the life span of punk,” says Mick Jones, and if you believe that a street movement has its moment but once it becomes mainstream and commercialised it dies, then he’s right. We are fortunate that Andrew and Susan captured that moment and choose to share it in their book.
Posted by Chris Charlesworth