Few British rock stars have been as meticulous with regard to their property portfolio as guitarist Jimmy Page, the mastermind behind Led Zeppelin. From his Thames-side boathouse in Pangbourne to Deanery Gardens in Sonning via Tower House in London’s Holland Park, multi-millionaire Page has shown exquisite taste, his keen appreciation for historic architecture rivalled only by George Harrison’s acquisition and restoration of the magnificent Friar Park in Henley. The only blip on Page’s residential landscape seems to have been Boleskine House on the shores of Loch Ness which Page purchased more with an eye for the notoriety of a former owner than any aesthetic appeal.

Born in Heston in 1944, Page spent his formative years in Epsom, with the family moving to 34 Miles Road when their only child James Patrick was eight. Page lived here until 1967 by which time he had accumulated enough funds from his session work to put down the deposit on the £6,000 house in Pangbourne. “Parked beautifully on the leafy banks of the River Thames, the dwelling was all windy passages and mysterious, angular rooms, leading to a quite beautiful lower level where a boat was moored, ready for instant take-off,” wrote Martin Power in his Page biography No Quarter: The Three Lives of Jimmy Page. It was here that in July 1968 he would play host to a young singer from the Midlands whose three-day stay led to his houseguest, name of Robert Plant, becoming the singer in Led Zeppelin. 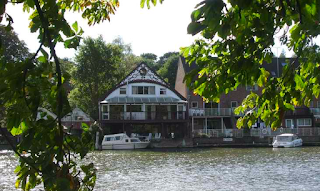 With the revenues from the first two Led Zeppelin albums now sitting in his bank account, Page acquired Boleskine House on the south east side of Loch Ness in 1970. Once the home of Aleister Crowley, the slightly sinister mystic, painter and writer, it was situated near Foyers Bay and in poor condition. “It was in such a state of decay that nobody wanted it,” Page later told Led Zeppelin archivist Howard Mylett. “It’s an interesting house and a perfect place to go when one starts getting wound up by the clock.”
By the time Page acquired Boleskine he had already become fascinated by Crowley, buying up Crowley-related ephemera that included private manuscripts, first editions of books, artwork, items of clothing and ceremonial vessels. Allegedly built on the site of a 10th Century Kirk (Scottish church) that according to legend “had been burnt down with its congregation”, the house was shunned by locals, as was a nearby graveyard. Crowley bought the ‘Manor of Boleskine and Abertarff’ in 1899, believing that its secluded location was eminently suitable for the staging of magical rituals, some of them erotic in nature. In the fullness of time Page would open a book shop in North Kensington called Equinox that was devoted to these interests. “There was not one bookshop in London with a good collection of occult books,” Page said, “and I was so pissed off at not being able to get the books I wanted.” 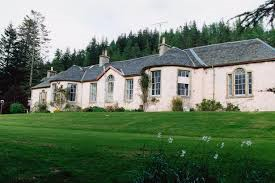 Up in Scotland Page endeared himself to the locals in 1979 by opening the new Phillip’s Harbour at Harrow, near Caithness, which he visited with the unrealised intention of opening a recording studio up there. Although he did some restoration work at Boleskine he sold the house in 1992 for £250,000, largely because he rarely had time to visit. The subsequent owners opened it as a hotel, then resold it in 2002 to a private buyer. In 2015 Boleskine was badly damaged in a fire and now awaits repair work.
Page’s next real home after Pangbourne was Plumpton Place, a Grade II Elizabethan Manor House in its own grounds near Lewes in East Sussex. Page acquired the property in 1971, shortly after the birth of his first daughter Scarlet, and owned it until 1985. With parts of the property dating from the 16th Century, it benefitted from improvements by renowned British architect Sir Edwin Luytens, and comprised six bedrooms, a large library and a 48ft long sitting room, all surrounded by a moat and lakes, not to mention two small cottages close by and a three-bedroom mill house with its own working water wheel. Plumpton Place was the setting for the segment in the Led Zeppelin movie The Song Remains The Same wherein Page sits with his back to camera playing a hurdy-gurdy alongside a moat as a pair of black Australian swans swim by. The sequence that follows, in which Page climbs a hill in a hooded red robe, was filmed at Boleskine.

With Plumpton Place located 67 miles south of London, Page was always going to need a London base and this turned out to be The Tower House on Melbury Road in west London’s affluent Holland Park. Designed and built between 1875 and 1881 to the exact specifications of renowned architect William Burges, Tower House – now a Grade I listed building – was a testament to the French Gothic Revival style that had enjoyed a brief upsurge in popularity throughout Victorian Britain. With its red brick facade, Cumbrian green slate roof, tracery windows and prominent cylindrical tower marking it out from the surrounding houses, it had enjoyed a rich history of ownership before Page arrived. These included esteemed archaeologist Richard Popplewell-Pullan, two army colonels and Poet Laureate Sir John Betjeman. “I don’t see how anyone can fail to be impressed by its weird beauty,” said Betjeman “[or] awed into silence from the force of this Victorian dream of the Middle Ages.”
After a brief period of neglect, Tower House was given a facelift in the mid-sixties by Lady Jane Turnbull, the daughter of the 9th Earl of Stamford, whose portrait hung in the National Portrait Gallery. In 1969 Lady Turnbull sold it for £75,000 to Irish actor, singer and bon vivant Richard Harris. “I loved the eccentricity of it,” Harris said at the time. “It was built by Burges who also built Cork Cathedral and it was the focal point of Kensington for me when I arrived in London.” An astute home owner who profited from buying, renovating and then quickly selling properties, Harris nonetheless lingered in the house even though he believed that ghosts of children who previously lived there inhabited certain rooms. To soothe their restless spirit, he bought them toys. “I love ghosts,” he said of his nightly visitors. “I depend on them to guide me through.” Harris brought in Burges’ original decorators Campbell Smith and Co. to restore its stone and plasterwork but in 1972 sold it for £350,000 to Page who outbid David Bowie, another rock star keen to inhabit its peculiar magnificence.

Page’s new acquisition boasted unusual inner decorations that mirrored his own particular interests in arcane, Gothic and Pre-Raphaelite design. Its painted ceilings depicted astrological signs, the sculpted mantelpiece in the library formed the Tower of Babel at its centre and elsewhere could be found murals, detailed woodwork, carvings and other objects of art, pagan or otherwise. It was built for exploration. “I was still finding things 20 years after being there,” Page told the BBC News Online in 2012, “a little beetle on the wall or something like that. It’s Burges’ attention to detail that is so fascinating.”
On October 15, 1979, a 23-year-old friend of Page died at the guitarist’s house in Plumpton Place, and his demise triggered Page’s decision to put the house on the market, although it wouldn’t actually change hands until the mid-eighties. However, his next country home, Old Mill House at Clewer near Windsor, would also become the scene of a tragedy for this was where Led Zeppelin drummer John Bonham died on September 25, 1980. Page bought the three-storey residence from British actor Michael Caine for £900,000, largely because it was close to a studio he had acquired at nearby Cookham, and would live there with American Patricia Ecker whom he married in 1986 and who would bear him a son, James Patrick III. (Page later married Jimena Gómez-Paratcha who bore him two further children, a girl born in 1997 and a boy two years later, but they were divorced in 2008.) Old Mill House was sold in 2008. 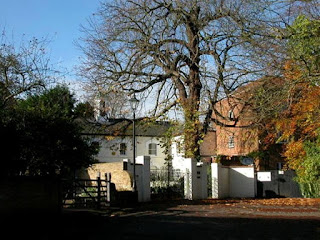 In the meantime Page had purchased another country property that in terms of prestige and architectural splendour was a match for Tower House. This was Deanery Gardens, also known as The Deanery, at Sonning near Reading, another Grade I listed building of significant historical importance and, like Plumpton Place, designed by Sir Edwin Lutyens. Financed by Edward Hudson, the owner of Country Life magazine, it was completed in 1901 and has changed hands several times in the last 100 years. Built in Lutyens’ Tudor Arts-and-Crafts style, it comprises two stories in brick with exposed timbers that surround a courtyard with an archway leading to the extensive grounds. Planted by the noted British horticulturalist Gertrude Jekyll, the gardens incorporate ornate curved steps, elevations, swimming pools, an orchard, herb beds and a croquet lawn. Although The Deanery is in the centre of the village, close to the Bull Inn and St Andrew’s Church, it is surrounded by high brick walls and extremely secluded. Neighbours include George and Amal Clooney and illusionist Uri Geller, and until Page acquired the property it was open to the public. 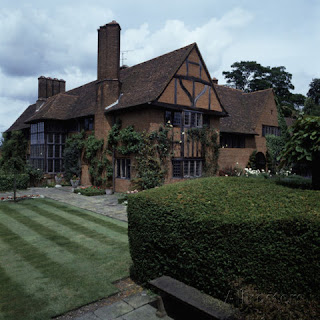 The only hitch in Page’s enviable property portfolio seems to be an ongoing dispute with his neighbour in Holland Park. The mansion next door to Tower House, Woodland House, was bought in 2013 for £17.5 million by singer Robbie Williams after the death of its previous owner, film director Michael Winner. Evidently its 46 rooms were insufficient for Williams’ requirements and the former bad boy of Take That planned to excavate its grounds to create further subterranean rooms and the building of a recording studio. Claiming that such building work might disturb the foundations of Tower House and expose his property to the public, Page recruited architects and structural engineers to support his case and won a partial reprieve that forced Williams to change his specifications. Ironically, considering the volume at which Led Zeppelin used to perform, builders at the site have been fined for making excessive noise. At the time of writing construction work appears to have been delayed at Woodland House and the Tower – believed to contain the dazzling dragon suits that Jimmy Page wore on stage – remains intact, as proud and lofty a symbol of Led Zeppelin’s stature in the rock world as any rock star mansion anywhere.

(All photos taken from the internet.)
Posted by Chris Charlesworth

You cant chooses your parents or your neighbors

Hi, Great.. Tutorial is just awesome..It is really helpful for a newbie like me.. I am a regular follower of your blog. Really very informative post you shared here. Kindly keep blogging.
Renovations in Battersea

Williams is a jumped up Butlins redcoat

Nicely written, accurate piece and a pleasure to read - thank you.

Spotted mention of Richard Hell on your biog. Saw him with the Void Oids at Bristol Exhibition Centre supporting The Clash, supported by The Loos, 5 November 1977. What an unparalleled night that was.

The article presents very interesting options for retro houses, in which there are many old design solutions, in which, at the present time, there is no need. For example, locally with ordinary lamps and huge windows, it would be nice to install Cloud Ceilings, since this thing solves lighting problems, and in general a great option that pleasing to the eye

If it wasn't for Williams, there would never have been Stairway to heaven whole lotta love ..kashmir ..since I been loving you , Black dog ..acchilles last stand because Williams wrote the songs for page to use in led Zeppelin.