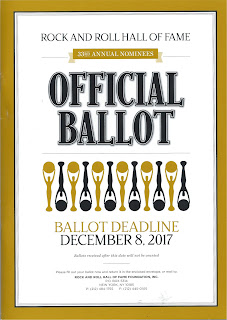 The arrival through my letter box yesterday of the Official Ballot for the 33rd Annual Nominees to the Rock And Roll Hall of Fame reminded me that, having become a voter in 1992, I am now in my 25th year as a voter to this institution, which probably makes me one of the longest serving. Nowadays there are about 500 of us but I suspect it was far less 25 years ago. 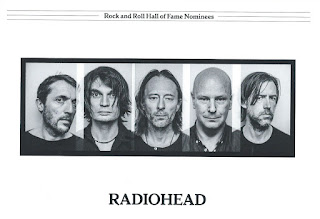 All that remains is to ask who gets my fifth vote?
Posted by Chris Charlesworth

MC5 please. Or any remaining that aren't The Cars

Oh, and I had probems with Annie too...

Do you mean to say that The Moody Blues are not to your taste, or that they are not rock and roll, or both? I can't argue with the former, but I wouldn't understand the latter. "Ride My See-Saw", "Gypsy", "Question", not to mention "I'm Just A Singer (IN A ROCK AND ROLL BAND)". Besides, the online public voting is showing tremendous support for them.
However, if I must stick to your nine designations, I'd go with The Zombies simply because I grew up with the British Invasion.

I never much liked the Moodies but I didn't mean to imply they weren't rock'n'roll - that was directed at Kate Bush.

Cars, but you're wrong about the Moody Blues

Did you know the Zombies formed in a pub in St Albans? It's got a blue plaque outside it.

I really appreciate these kind blogs and bloggers which gave us right and useful information. I came to know lot many things about
https://www.lcrenovation.co.uk/renovations-in-vauxhall/
House Renovations in Vauxhall