TOM PETTY – Rockin’ Up The Blues 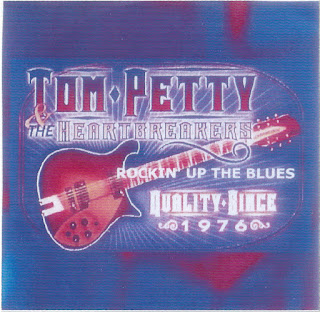 Greatly shocked this morning to wake up to the news that Tom Petty had died. His Greatest Hits collection and one other record – about which more below – were never far away from my consciousness.

Oddly, I first saw Tom Petty & The Heartbreakers at CBGBs in New York towards the end of 1976. I say oddly because he and The Heartbreakers weren’t a punk band like The Ramones, or a power pop outfit like Blondie, or new wavers like Talking Heads. But they weren’t hard rock either, more a traditional rock band whose music was built on the blues and fifties rock’n’roll, like the early Beatles, Stones and Who, so they were a bit out of place down there on the Bowery. Also, and this is important, there was none of the slightly under-rehearsed amateurishness about them that – not necessarily in a bad way – characterised groups like Television and the Patti Smith Group, and they didn’t dress or wear their hair in a style that drew attention to any ‘next-generation’ appeal. Equally importantly, they knew their chops, especially guitarist Mike Campbell, and had plenty of drive. I thought they were from the same disciplined domain as Bruce Springsteen’s E Street Band or Bob Seger’s crew from Detroit. Then again, Tom’s high voice sounded a bit like Roger McGuinn of The Byrds which, coupled with his Rickenbacker guitar, gave them an added string to their bow. Nowadays it’s called ‘heartland’ music which implies a common bond with the blue-collar American working man and a tendency not to stray too far away from their rudimentary roots.
I loved ‘American Girl’. Called upon to edit a book on Tom a few years ago I took it on myself to expand on what the author wrote, adding: “Guaranteed by its title alone to find a ready audience in his homeland eventually, ‘American Girl’ established Tom’s early trademark style of jangly guitars – surely the influence of The Byrds’ Roger McGuinn and perhaps 1965-era George Harrison with The Beatles. Tom’s sound was more up to date though and captured some of the energy of the downtown New York City scene, the cradle of punk and New Wave music. The introduction sets the scene: eight bars of chiming electric 12-string Rickenbacker over a muted Bo-Diddley beat, soon joined by a swooping bass, all paving the way for an urgent, edgy verse that builds to an exuberant, climactic high on the title… ‘an Am-eri-can Girl’. After two verses the tempo sits back, idling to regain momentum before the sprint to the finish, a repeat of the intro, this time intensified by a wash of backing vocals, and, finally, an outro solo of piercing top end clusters that spiral into the fade. At just over three and a half minutes ‘American Girl’ never outstays its welcome; as timeless as it is memorable, it set a high bar for the future though, scandalously, it was never the hit it deserved to be.”
Plenty more of Petty’s songs are up there with the best – I especially like ‘Here Comes My Girl’ too – but the real holy grail to my mind is a quasi-legal live album called Rockin’ Up The Blues that was sent to me by the author of that book. I think it’s a sort of officially-sanctioned TP bootleg as its 38 tracks – almost all hard-to-beat covers of classic rock songs from the 50 and 60s – were recorded at shows in small venues, in rehearsals, either during sound checks or before gigs, or on soundstages where soundboard recordings were easily taped. There’s no info on the package beyond the track listing – see below – and if it is to be believed the songs were recorded at various times between 1982 and 2003, mostly in the US but a few are from Germany and Italy. I suspect it was made by the band for the band and a few leaked out. 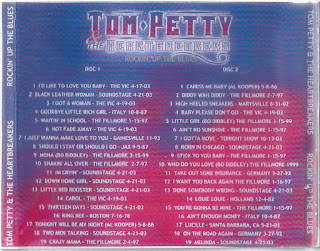 In some ways the track selection can be compared with the Beatles BBC CDs, not so much the actual tracks but their pedigree, because these songs are the primer for all bands that want to start out on the right foot, have a massive repertoire to fall back on, and who know that if they master these songs then as sure as eggs is eggs it will stand them in good stead for the rest of their career no matter where that career goes. They're spectacularly good on Bo Diddley covers and ‘Shakin’ All Over’ is a match for The Who, cleaner but just as riveting, while ‘Little Red Rooster’ has all the pent-up sensuality of an August night in Alabama. Naturally Petty & The Heartbreakers are more assured than the early Beatles – they’d been at it for far longer and it shows – but the respect they show for the roots of their profession shines out like a beacon of a foggy night.
I’m playing Rockin’ Up The Blues as I write this, and it sounds as good as ever. RIP Tom.

The article was up to the point and described the information very effectively. Thanks to blog author for wonderful and informative post.
https://www.lcrenovation.co.uk/renovations-in-stockwell/
House Renovations in Stockwell