PINK FLOYD – Now There Are Two of Them 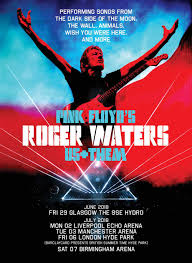 Today’s Guardian G2 section, which on Fridays is devoted to films and music, carries an advert for five concerts by “Pink Floyd’s Roger Waters”, one in June 2108, the rest in July. “Performing songs from Dark Side Of The Moon, The Wall, Animals, Wish You Were Here and more,” it says, all which implies that Waters is presenting a Pink Floyd show in all but name.

I have two issues with this. The first is that when I went on line just now to discover the price of the tickets for the show in London’s Hyde Park – as ever unmentioned in the ad – I learnt from Ticketmaster that the cheapest were slightly over £100, rising to almost £200 for those in areas closer to the stage. The capacity for shows there is 65,000 so if all the tickets sell quickly, which they no doubt will, for the London show alone promoters Live Nation will bank in excess of £7,000,000, and you can add a few more million on top of that for the smaller arena shows in Glasgow, Liverpool, Manchester and Birmingham. I know interest rates are low these days but I find it iniquitous that concert promoters can bank all that money up front, nine months before the shows take place, and earn interest on that sum – well in excess of £10 million quid – in that time.
The second issue is more an observation on the ironies of ‘classic rock’ in the 21st century. Pink Floyd ceased collective endeavour on the death of Richard Wright, a fact highlighted by the title of their V&A show – Pink Floyd: Their Mortal Remains. The good news for fans, however, is that now we seem to have two Pink Floyds, one led by Roger and the other by David Gilmour, whose most recent concerts relied heavily on Pink Floyd material. Those attending would no doubt have demanded their money back had it been otherwise. Indeed, a recently released live double album from the tour, Live At Pompeii (another Floyd reference), consists of eight songs from Gilmour's solo albums and 14 Pink Floyd songs, and like Waters they are from DSOM, The Wall and WYWH (but no Animals). No doubt this time next year a live Rogers Waters album will be available with a similar PF track listing.
Poor old Nick Mason, whom I always liked, must be feeling a bit left out.

I've seen Waters solo a couple of times and he does put on a fantastic show. The set list is 80% Floyd, but then that's what the fans want, and if you're asking £100 a ticket it's probably best to give the people what they want.

The alternative approach would be what Paul Weller did when I saw him earlier this year - three Jam songs, two Style Council, and about 22 dull solo efforts. Not what the people around me wanted at all.

When Weller supported The Who in Hyde Park last summer he bored the word to tears with songs from his most recent album. The set only came alive when he did a couple of Jam songs, and the crowd responded accordingly.

Your article is very informative. Thanks for sharing such wonderful info with us. I hope you’ll share much more interesting articles like this. Please keep sharing!
House Renovations in Battersea