LOVE ME DO! THE BEATLES’ PROGRESS by Michael Braun – Book Review 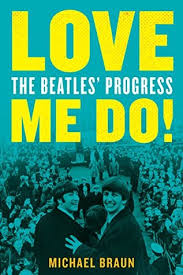 When The Beatles broke through with ‘Please Please Me’ 57 years ago next month they were simply another element of show business, a cosy club that gathered together absolutely everyone who earned their living by entertaining others. It included actors, comedians, ballad and pop singers both male and female, acrobats, puppeteers, magicians, dancers and some who did all of these things, the all-round entertainers that so many entering the profession aspired to become. There was an etiquette amongst them all that required everyone to be jolly, polite and, most importantly, to support one another, and this protocol extended to the media in its belief that readers of newspapers and magazines only ever wanted to read positive stories about their favourite stars.
Brian Epstein knew this and would encourage The Beatles to go along with it, but John wasn’t having it and neither, to a slightly lesser extent, was George. Nevertheless, with Paul happy to toe the line and Ringo never wanting to rock the boat, Epstein and the showbiz establishment succeeded in silencing John and George, at least until 1966 when The Beatles stopped touring and were able to break free.
That’s the common perception but it came under serious threat of being undermined in 1964 with the publication of a book called Love Me Do! The Beatles’ Progress. The book didn’t do well and was out of print for three decades, but it was republished by Penguin in 1995 with a perceptive foreword by Mark Lewisohn, and a new edition (pictured above) without changes came out a few weeks ago. Love Me Do! was written by Michael Braun, an American journalist living in London who followed The Beatles on their 1963 autumn UK tour, and met up with them again the following February in Paris, New York and Washington. For reasons unexplained he seems to have been given unlimited access to them and, unlike the UK media, he wasn’t constrained by the customary etiquette. With no reason to do otherwise, he told it like it was, warts and all.
Oddly, Love Me Do! eluded me until last month when Rolling Stone listed their top 10 Beatles books and named it the best of the lot. I’d read the other nine, of which I own seven, but was unfamiliar with the one at the top of the list. I’d better give it a go I thought.
Lewisohn’s foreword makes a strong case for Love Me Do!, agreeing with Rolling Stone that it might be the best Beatle book ever. Long before fly-on-the-wall reportage was common, in that forgotten era when show business was a topic that journalists covered obsequiously, like a harmless bit of fun, when just about every singing act on TV or on record was accorded a positive appraisal because that’s what the PRs wanted and it helped sell papers or books, Love Me Do! actually broke the mould, just as The Beatles did in so many other ways. If you thought that Philip Norman’s Shout! was the first Beatles book to lay it on straight, think again. Love Me Do! beat it by 17 years. Not only that, it really was the first ever Beatles book. 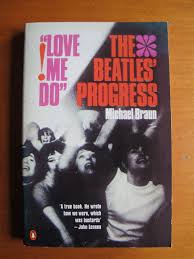 Much of the book describes the enormous, unimaginable pressure under which The Beatles existed as their popularity mushroomed to levels unseen before or since, and while the outside world was presented with a uniformly happy-go-lucky Fab Four, in their quieter moments Braun saw something quite different. The Beatles, especially John and George, swear, lose their tempers and are rude about Cliff Richard. Throughout there’s a sense that these two Beatles especially are rebelling against the industry of which they have become a part. They look around them and all they see is old-fashioned and redundant. They are obliged to be cuddly and nice, even though they don’t want to be, and neither are they willing to kowtow to their elders. They want to tell the truth about themselves and not be hidebound by a media that is more interested in the length of their hair and where they buy their shirts than in what they think about the state of the world.
Equally importantly, Michael Braun is unafraid to report precisely on how The Beatles behave. “While others mention that The Beatles drank Coke, Braun saw no reason to hide the fact that they also took it with Scotch,” writes Lewisohn in his foreword. And a little later he points out that because Braun failed to portray The Beatles as squeaky clean, his book was ignored by The Beatles’ fan club magazine and given short shrift by an NME reviewer. This is because Love Me Do! was simply too honest for its time, and helps explain why it was unavailable for as long as it was.
Lewisohn also stresses how Braun’s book contrasts the differing personalities within the group, accurately portraying them in ways that became stereotyped in the fullness of time: John, cynical, honest, fiercely intelligent; George, questioning, thoughtful, alert; Paul, obliging, affable, welcoming; Ringo, down-to-earth, carefree.
Another dominant feature of Love Me Do! is the Beatles’ wit. Here, possibly for the first time, are many of those droll retorts that became common currency in future books. “Turn left at Greenland,” was simply not what the American press was expecting as an answer to their query about how The Beatles ‘found’ America. Absolutely everyone else in this line of work would have replied, “It’s great”. Examples like this are over familiar now, but the point of the book – and of The Beatles – was that nobody in showbiz had ever answered the press in this way before.
Rolling Stone’s assessment of the book mentions that John himself singled out Michael Braun’s Love Me Do! for praise during his soul-baring interview with editor Jann Wenner in 1970. “That was a true book,” he said. “He wrote how we were, which was bastards. You can’t be anything else in a situation of such pressure.” Furthermore it was Braun who encouraged John to publish his own writings, introducing him to Tom Maschler at Jonathan Cape which led to the publication of In His Own Write.
Only £11 on Amazon. On John’s recommendation, treat yourself for Christmas.

I don't remember where I ordered my book from, but it took me years to realize it was the first edition. And I remember it was cheap.