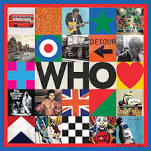 “Do not go gentle into that good night,
Old age should burn and rave at close of day;
Rage, rage against the dying of the night.”

Thanks for this review, Chris. I was going to leave it until after Xmas, but you have sold me!
(BTW - I LOVED Endless Wire!)
:-)

41 years later, I still find myself regularly singing the melody and clever internal rhymes of Music Must Change. Doubtful that This Music Must Fade will have that sort of staying power. And, yes, I recognize the irony of that statement.

Thank you for the review!

I like your M&S reference ;-) that's what I thought first when I heard Simon's song. Although it's not a Who song...I really like it!!! (Maybe because I also like M&S...)

Thanks again for the review.

I was hoping you'd weigh in!

1. Agreed on Purple Dress vs. rest of Endless Wire.
2. Roger sounds great to me.
3. What's with the Autotune?
4. I'll bet "Got Nothing To Prove" actually is a mid-'60s demo given a Ted Astley-type orchestral overdub.
5. I need some more time with this album, and while I don't expect to love it, I suspect it will be a grower.

Also, per the Uncut review that called it "their best since Quadrophenia..." Considering they've only made six albums since Quad and one of them was By Numbers, I call lousy journalism.