TWO LOVE AFFAIRS THAT ENDED IN TEARS: PATTI SMITH & ME, IAN HUNTER & ME 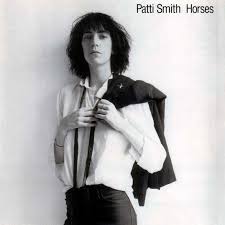 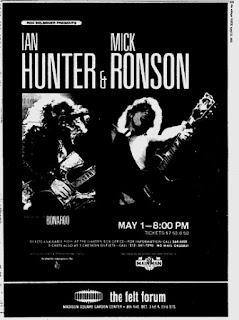 Unfortunately my friendship with Hunter was not to last. In the late spring of 1975 I was still in the US, now in New York, when Hunter and Mick Ronson, formerly David Bowie’s guitarist and right-hand man, formed the Hunter-Ronson Band. I saw them play at the Felt Forum in New York in early May and wrote a complimentary review. They were then scheduled to undertake an extensive tour of the US but most of the dates were cancelled “because of Ian Hunter’s illness”, according to a press statement from their PR.
It was Ian Hunter’s misfortune that at the time I was in the midst of a fairly casual but nevertheless pleasant between-the-sheets relationship with a girl named Karen who worked for ABC, their US booking agency.[2] One night she was over at my flat when she spotted the press release relating to Hunter’s ‘illness’ on my desk. She read it and scoffed, telling me that the real reason their tour was cancelled was because Hunter-Ronson hadn’t sold enough tickets in Middle America to make the trip worthwhile.
The next day I confirmed what Karen had told me by calling box offices in Memphis, Atlanta and elsewhere, inquiring about ticket availability as if I was a punter. “Are there any tickets left?” I asked. “We’ve only sold 23,” they said at the Memphis 2,000-seater. It was the same elsewhere and, indignant that the PR had lied, I duly reported the cancellation of the tour in my New York News column in the following week’s Melody Maker. “Contrary to what you may have read elsewhere,” I wrote, “The Hunter-Ronson tour was cancelled through lack of ticket sales and not because Ian Hunter is ‘ill’.”
Hunter evidently read this report. Two or three weeks later I bumped into him at the Bottom Line in Greenwich Village. He certainly didn’t look ill to me, even though this was at a time when the cancelled tour would have been taking place. Quivering with rage, he accosted me, implying that I had somehow betrayed our friendship. I thought for a moment that he was going to hit me. I pointed out that I tried to report the truth in MM, not recycle PR bullshit. Hunter didn’t deny that the dates were cancelled through lack of ticket sales but he seemed to think that I, and by extension Melody Maker and the rest of the music press, existed simply to further his career and that we should ignore anything that reflected unfavourably on him. The argument raged but remained unresolved.
Ian Hunter and I never spoke to one another again after that night. If we had I’d have told him that the reason I relayed the real cause the cancellations in MM was not out of malice but because I felt he’d betrayed his man-of-the-people image by lying, or at least condoning the lies perpetrated by his PR.
I rest my case.

[1] Foolishly, I lent this copy of Hunter’s book to Julian Cope who in 1993 approached me to publish his autobiography Head On. He never returned it.
[2] A further adventure involving Karen can be found here: https://justbackdated.blogspot.com/2013/12/steve-syler.html

Just wanted to say. Rodney Bingemheimer - what a great name!

For many years he was known as the Mayor of Sunset Strip!