A VAGUE HAZE OF DELIRIUM CREEPS UP ON ME – My Passage To Melody Maker, Part 1 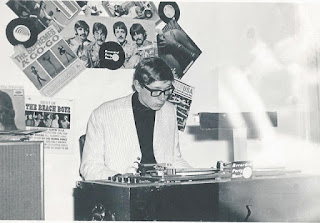 CC as DJ at Anderton's Bar in Skipton, sometime in 1968

According to the well-known cliché, today is the first day of the rest of your life. For most of us it’s not that different from yesterday or tomorrow and in the present Covid-19 lockdown not that different from the past few weeks or what May and June might bring, but 50 years ago this week there really was a day that profoundly signposted the rest of my life.
I’ve always loved newspapers. Back in my hometown of Skipton when I was young my mum read the Daily Mirror and my dad the Yorkshire Post, and in the evenings the Telegraph & Argus, published in Bradford. I loved the Andy Capp cartoons in the Mirror and a writer who went by the pen name of Cassandra whose columns could be witty yet at the same time expose injustice and hypocrisy. Even today, three weeks shy of my 73rd birthday, I feel somehow deprived if I don’t spend an hour a day with my Guardian.
It was my mum who encouraged me to read, drawing my attention to the columns by Cassandra when I was old enough to understand them. By the age of 12 I’d devoured Sherlock Holmes and moved on to her historical romances by Anya Seton, the Hilary Mantel of her day. Mum was a member of the Brontë Society and she took me to Haworth, the home of sisters Charlotte, Emily and Anne, and out onto the moors where Heathcliff courted Cathy. On my bookshelves are mum’s pre-war editions of Jane Eyre and Wuthering Heights, tiny hardbacks bound in red cloth and printed on paper flimsier than tissue, and a few others from the period, Galsworthy’s Forsyte Saga, The Little Mermaid by Hans Christian Anderson, dated 1926 in her handwriting, and a collection of poems by Rupert Brooke, printed in 1917. 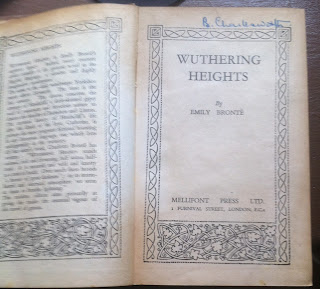 At boarding school the only subject in which I progressed was English and by the time I was 16 - the year my dad took me to see The Beatles in Bradford - I’d decided I wanted to be a newspaper reporter. I left there a year later, pushed out by a headmaster who thought that playing the guitar and listening to The Beatles and Rolling Stones marked me down as disruptive and unlikely to pass any A-levels. He may have been right. I applied for a job on the local weekly paper, Skipton’s Craven Herald & Pioneer, went for an interview and started work there in September, 1964. It probably helped that my dad knew the editor but I don’t think I’d have got the job if he didn’t think I was up to it.
I spent the next three and a half years as a reporter on the CH&P, an immensely happy period of my life. I played guitar in a local group, cover songs from the Beat Boom, and made many friends, some of them still friends today. Until I discovered the pleasures of the pub, I sat in a coffee bar and played the jukebox. I snogged girls and realised some were not averse to exploratory endeavours. I did a stint as a DJ at a local bar. I lived at home, walked to work at the CH&P offices every morning, and most days mum made me lunch at home. On Fridays I went on a day-release course at Bradford Tech to learn the tradecraft of journalism, how to subedit copy quickly, how to reduce 300 words of copy to 200 and not lose the meaning, how to interview, how to enliven dull press releases, how copyright, criminal courts and town councils worked. I learned to proof read, write shorthand and type, and there was an English course that took me to A-level standard, the set text Catcher In The Rye, so I absorbed alienation and anguish. It was drilled into me that the pinnacle of journalism was to work on Fleet Street in London.
I reported from Skipton’s magistrates’ court where miscreants were fined for shoplifting, fighting or driving carelessly, and I made passing acquaintances with the town’s ne’er-do-wells and the lawyers who defended them. I visited the police station each morning and took down details of crimes committed in the last 24 hours, thefts of cars, break-ins and sheep rustling. I reported on council meetings where decisions were made to grant planning permissions, repair roads or relocate bus stops. I reported on the diamond wedding celebrations of elderly couples who were photographed holding their telegrams from the Queen. Little knowing what the future held, I reported on a concert in nearby Ilkley by the classical guitarist John Williams, my first ever music review. 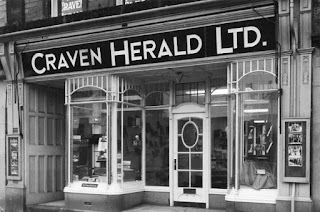 The CH&P offices in Skipton High Street.
There was a stationary shop on the ground floor, with reporters' offices above.

I also reported on potholing tragedies in which young men died underground when unexpected rainfall flooded the caverns they were exploring. These headline-grabbing stories attracted the attention of the national press which brought me into contact with reporters from national daily newspapers, usually from offices in Manchester, who arrived in the Dales wearing suits and ties and shiny shoes most unsuitable for trudging over the moors where the Cave Rescue Organisation, among them friends of mine, did their work. In my wellies and anorak, I sniggered at these daily reporters. It was my first inclination that I didn’t want to join them.
Like just about everyone else on the course, I sailed through my journalism exams – I think there was a 90% pass rate so if you failed you were in the wrong job – and graduated to the Bradford Telegraph & Argus, commuting daily from Skipton by car. This was a big step up, a far more serious platform for my calling. The reporters’ room reeked of cigarette smoke, cheap perfume and deadline anxiety. At its centre was a large table at which we sat facing one another, like in a restaurant except that instead of place mats and cutlery there were manual typewriters, piles of blank copy paper, carbon paper and overflowing ashtrays. Alongside one wall were booths with phones to make calls away from the noise of the typewriters or people yelling. Downstairs in the basement huge printing presses started rumbling around noon and continued until late afternoon. It was exciting, at first anyway, a living thing, even if today’s paper wrapped tomorrow’s fish and chips.
I worked shifts, sometimes quite late, calling the police, fire and ambulance on the hour until 2am and, when necessary, heading out into the night with a photographer to cover an accident or a fire. Once I had to knock on a door and request a photograph of a crash victim from a grieving family; perhaps in shock, perhaps needing company, they welcomed me into their home and spoke at length about the teenage son who lay in a mortuary.
All the while, humming away in the background, my first love was pop music, by 1968 morphing into rock. Not many of my T&A colleagues shared this and I didn’t talk about it much at work, but through a chance conversation I discovered that the chief sub, Leon Hickman, was a music lover too. Together we approached the editor of the paper and suggested that the T&A might attract younger readers if half a page a week was devoted to a pop column, perhaps a review of a Bradford concert by a noted group, maybe some record reviews, or news of some local band’s tilt at success. To our delight he agreed. We called it The Swing Section and I began to write about music regularly for the first time.
I wrote off to record companies in London requesting review copies of records but the response was patchy. The first LP I ever reviewed was Shine On Brightly by Procol Harum. I reviewed local shows by Marmalade, Joe Cocker and The Move, speaking briefly to Roy Wood. On the phone from one of those booths in the reporters’ room I interviewed Jimmy Page who told me about the new group he’d formed called Led Zeppelin, and John Paul Jones came on the line too. I interviewed – and was besotted by – Sandie Shaw when she visited Bradford’s Grattan warehouse to promote a clothing line designed by her husband Jeff Banks. I wrote about how big groups often ignored Bradford when they toured the UK. I organised a beat group contest at a local disco and the winners were given an audition by Polydor Records. It wasn’t much but it was a start. 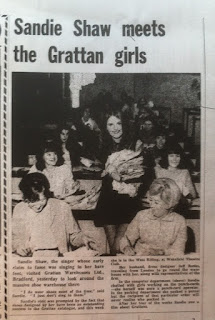 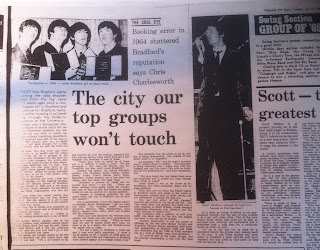 Sandie visits Bradford and my story about 'top groups' bypassing the city.
Posted by Chris Charlesworth