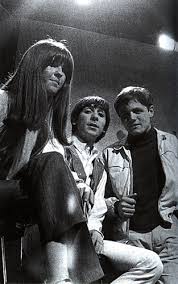 Regular get-togethers with a group of my old Melody Maker colleagues enable me to catch up with former Who drummer Geoff Brown, who was the MM’s sub-editor for several years during my time on the paper and is now an Associate Editor at Mojo.
Former Who drummer Geoff Brown, you might ask. Never heard of him!
Well, while Keith Moon, Kenney Jones and, nowadays, Zak Starkey have all held down The Who’s drum stool on what at the time seemed like a permanent basis, there is a secondary group of drummers who for one reason or another have occasionally sat behind Pete, Roger (and John) and done their best to supply the beat. Detours drummer Doug Sandom springs to mind, of course, as does Simon Phillips who held down the drum spot alongside Jodie Linscott on extra percussion during the 1989-90 bells and whistles Tommy tour. A session drummer or two came between Doug and Keith and the past decade or two has seen drummers from other bands occasionally take over when Zak was elsewhere, not least playing for Oasis. And who can forget Scott Halpin who took over in San Francisco in November 1973 when Keith’s backstage tipple was spiked with animal tranquiliser? But where does Geoff Brown come in?
On Friday May 20, 1966, at the Ricky Tick Club in the Corn Exchange, Newbury, The Who were supported by the Jimmie Brown Sound, for whom Geoff played drums. “Moon and Entwistle didn’t turn up,” Geoff once told me. “Well, they were very late. Daltrey and Townshend were furious, really angry. We were a soul band so they asked me and our bass player [Colin Standring] if we’d stand in for them. We did ‘Heatwave’ and then ‘Ooh Poo Pah Doo’, the Jessie Hill song. Then Moon and Entwistle showed up with Bruce Johnston of The Beach Boys, and they were pissed. Of course they took over but the atmosphere was really heated.”
Tempers remained heated during the remainder of The Who’s set, however, and flared up at the end. “Moon kicked over his drums and a cymbal caught Townshend so he just threw his guitar at Moon,” remembers Geoff. “It caught him a really heavy glancing blow on the forehead and knocked him right back. Then there was a flare up in the dressing room and Moon and Entwistle left in their own car. It was obvious there’d been a real fight.”
Keith received a black eye and badly bruised face and also required three stitches in his leg, and he and Entwistle announced their intention to leave the band. The next day Pete went to Keith’s house in Wembley to apologise but Keith refused to open the door. In the event it took a week before Keith decided to rejoin the fold, and in the meantime the other three used drummers from the support acts.
After the incident Geoff continued drumming for another 18 months before turning to journalism in 1968. He still has his Rogers kit though.

An amazing story - how come we missed that episode in the Raver. Glad Geoff didn't hit by any flying cymbals. Chris W.

The first book I ever read on the 'Oo was George Tremlett's 1975 bio. Even as a kid reading about these four gang members, I realised very early on that they were all pretty useful with their fists.
Daltrey would provoke Townshend all the time; probably still does.