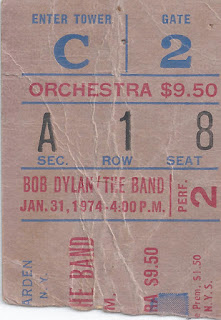 Section A, Row 1, Seat 8. I didn't normally hang on to tickets but I did this one.
Looking back on it now, that month, January 1974, was one of the most musically eventful of my life: based in New York and visiting Chicago, St Louis, Philadelphia, Macon and Nashville, with the trip to Virginia to see Bruce an added bonus. And it wasn’t over yet for, on January 30, the icing on the cake was seeing Bob Dylan for the first time. What’s more, I was sat in the front row of Madison Square Garden, Dylan a few feet away.
My friend Mike from Columbia, the same Mike who’d introduced me to Bruce, excelled himself again, somehow managing to get hold of four front row centre tickets, the best seats in the house, for this opening show of a three-night run with The Band. He distributed them to four of us individually before we arrived.
As it happened I arrived first, just as the lights were dimming and the crowd was roaring in anticipation, and it took me some time to push through to the front, the security all assuming – until they saw my ticket – that I was a frenzied fan intent on getting as close to the stage as possible. When I reached the front row there were four empty seats and so, cheekily, I draped myself across all of them, lounging as if on a sofa. Those around me must have wondered who the hell I was, someone who could obtain four front row centre seats for himself, just so he could stretch out lethargically as he might in his living room, right there in front of Bob Dylan.
Talking of whom, the man himself had launched into his opening song, ‘Most Likely You Go Your Way (And I’ll Go Mine)’ by the time I took my seat(s), and he peered down quizzically at me, no doubt also wondering just who the hell was this bloke who seemingly had four seats to himself, right slap bang in the middle of the front row. I think I put him off his stride for a moment or two, and he was well into the second song of the night, ‘Lay Lady Lay’, by the time the other three ticket holders arrived and order was restored.
That night Dylan played many of the songs I wanted to hear and he was effortlessly supported by The Band, then at the peak of their game. Their fluent musicianship, the result of hundreds of hours of ensemble playing during ten years together, made for a terrific contrast with Dylan’s more casual, impromptu style, each supplying the other with exactly what was needed to serve up a perfect feast.
There was an acoustic set within the main set, featuring Dylan alone, during which a roadie nipped down to ask one of our party to stop taking photographs as it was putting him off. When he put his camera away, Dylan looked down and nodded, acknowledging the gesture. My only complaint was that he failed to sing ‘Mr Tambourine Man’, my favourite Dylan song, but he did do ‘Like A Rolling Stone’, my second favourite, which closed the show. For a final encore he sang ‘Blowin’ In The Wind’, by which time the house lights were on and the audience jammed up at the front all around me. Truly a great night.
I reviewed the show for MM, dated February 9. ‘They cheered and clapped and waved for 15 minutes even though the house lights were up and ‘Greensleeves’ was playing through the PA system and Bob Dylan had already played a couple of encores,’ I wrote. ‘[Promoter and tour manager] Bill Graham, at the rear of the stage, looked perplexed and wondered when in hell the 20,000 Madison Square Garden crowd was ever going to leave. Then Bob returned on his own and looked slightly sheepish. He’d discarded his black suit and was wearing a blue sweater with a white maple leaf on the front. The cheering reached greater heights as he walked towards the microphone and looked as if he was going to say something. Then he changed his mind and walked across the stage, smiling and holding his arms aloft like a prize fighter who’d just knocked out the champ. Then he went back to the mike. “Thank you. See you next year,” he said. Then everyone knew it was all over.’
In fact, ‘Like A Rolling Stone’ had closed the concert proper and when the house lights were raised, while Bob and The Band went off for a breather, the crowd rushed to the front. I was caught up in the melee, standing a few feet from him during two further songs, ‘Forever Young’ and ‘Blowin’ in the Wind’.
I would get closer to Bob on one more occasion, backstage at a Rolling Stones show at the Garden in 1975, but I would never get to interview him. And it was two years before I next saw him, on stage, on the Rolling Thunder Review up in New England, but that’s another story.

February was only marginally less busy for me than January. I never kept a diary but back issues of MM reveal that I interviewed John McLaughlin, Blue Oyster Cult, Black Oak Arkansas, had a sneak preview of a new album by Maggie Bell, and reviewed The New York Dolls, supported by Elliott Murphy, at the Academy of Music on East 14th Street, and Stephen Stills at Carnegie Hall.
I would come to know the Academy well, seeing upwards of 30 shows there in the coming three years, and I soon became on nodding terms with Howard Stein, New York’s leading rock promoter, who put on most of the shows there, and a few elsewhere too. The number two promoter was Ron Delsener who in time would topple Stein.
In fact the Academy was a rather tacky old theatre, once an opera house, that in 1976 would change its name to the Palladium. Either way it reminded me a bit of the Rainbow in London, except that at the rear of the stalls was a big standing area, its floor littered with paper cups and trash. It always stank of grass, marijuana that is, and loose joints could be bought for $1 a pop from dealers who operated outside, tending to the needs of those queueing to get in.
This was the second time I’d seen the Dolls – the first was at the Whiskey in LA – and in my review I remarked on an improvement in their show. Roy Hollingworth before me had introduced MM’s readers to the Dolls in a series of flattering reviews, and I would see them perhaps half a dozen more times over the next couple of years, a period that saw their fortunes slipping and sliding alas. At the Academy, however, they were still on a pedestal, their set preceded by a short film that had been made by Bob Gruen, New York’s busiest rock photographer whom I would soon come to know well.
Nevertheless, I felt bound to point out the similarity between the Dolls and the Rolling Stones. ‘There isn’t a shred of originality about their entire performance,’ I wrote. ‘[It is] based so obviously on the Rolling Stones that one tends to think that maybe it’s some kind of Mike Yarwood of rock and roll out there on the stage. The early half of their set was surprisingly tight. They’ve obviously been rehearsing recently and taken various instant courses on how to play guitars. The latter half, however, descended into a deafening musical abyss, all stemming from David Johansen’s vocal work which gradually lost its pitch amidst his enthusiasm. By the end he was yelling his head off. But the Dolls are the Dolls and in New York before their own audience it doesn’t really matter how well – or how badly – they play.’
I was far more complimentary about Stephen Stills at the Carnegie, New York’s premier classical music venue that made the Academy look like a pigsty. I noted that he played six different guitars, opening with ‘Love The One You’re With’ and moved through an electric set, then acoustic, before winding up on electric again, and offered songs from all the phases of his career. I was particularly impressed when he dismissed his band and played solo. ‘Though his voice sounded a little croaky, his guitar style – so deceptively simple but hugely fluent – was a joy to hear. He gave us ‘Change Partners’, ‘Crossroads’, ‘You Can’t Catch Me’, McCartney’s ‘Blackbird’ and ‘4 + 20’, a huge favourite of mine.
‘It’s not until you see Stills performing on his own,’ I continued, ‘that you realise how talented he really. He’s casual in the extreme, lighting cigarettes during numbers and tapping his foot to keep the time signature, and he creates an aura of respectful silence from his audience. Unquestionably one of the best guitar players rock has produced, he’s equally at home on either the acoustic or electric instrument. The mood was married only by the inevitable yelling for requests between songs but Stills gritted his teeth and played only what he wanted to play.’
In New York Stills stayed at the Carlyle, a classy hotel on Madison Avenue not far from my apartment, and I was introduced to him there the following day. I liked him a lot, and he took to calling me ‘English’, a nickname that stuck on those occasions when I bumped into him over the next year or three.

Back at Peter's we had a reel to reel tape and I recorded a television show of Bob Dylan playing. There was a fantastic acoustic version of Mr Tambourine man with a film of a fairground ride. There were two films of Bob and one of Joan Baez. I have been able to find the Baez one but not a Dylan one. Perhaps they were wiped as were a lot of tapes.