Newly installed in the apartment on E 78th Street, the first thing I did was to buy a stereo on which to play the LPs that kept arriving. I was still using the Olivetti portable typewriter I’d brought back from LA, the one that Christine had borrowed, and it worked just fine on the chunky farmhouse-style wooden table. No sooner had I finished writing up my story about Greg Allman and the trip to Macon on it than I was invited to Nashville, another first, to attend Columbia Records’ annual sales convention. I flew down with Mike O’Mahoney, the company’s PR whom I knew because he used to work for CBS – as Columbia was known in the UK – in London.
We stayed at Roger Miller’s ‘King Of The Road’ Motor Inn, named after his 1965 hit song, and it was crammed with country music cowboys. What I remember most about the hotel was its weird system of room service whereby a dozen or more large tubes extended from the basement right up to the top floor, running through the rooms, on which orders were delivered. You placed your order and 15 minutes’ later it appeared on this cockeyed dumb-waiter system. I later learned that it fell down when guests realised they could help themselves to food and drink on its way to floors above them and no one could figure out who’d put the snatch on it.
Mike Mahoney was blessed with the traditional Irish gift of eloquence and in the evening I found myself dining with Goddard Lieberson, the President of Columbia, and other executives, in a private dining room. At the other end of the table was David Essex, newly signed to the label, who spoke with an exaggerated Cockney accent that I thought was wildly affected and made him sound like a prize prat. Offered the opportunity to interview Essex, I declined. I hadn’t come to America to write about second division British pop singers like him.
A far better prospect reared its head the next day when, much to my surprise, Mike somehow wangled it that we could borrow the Columbia executive jet for a few hours, an even better plane than the one I flew in two weeks ago from Chicago to St Louis with Black Sabbath. So here I was, with just Mike for company, in this light aircraft, the nearest thing to a spaceship that I'd ever flown in. Up we went, heading east over the Blue Ridge mountains to the nearby state of Virginia to see two shows by an act for whom the label had very high hopes, another in the parade of ‘New Dylans’ as it happened. The pilot dropped us off in Richmond and headed straight back to Nashville. Only the top brass could tell him to wait.
The Mosque, in Richmond, and the Chrysler Theater in Norfolk, where we went the next day, were small old-fashioned venues and both are still operating today, though The Mosque is now called The Landmark. I don’t think either was sold out on January 25 and 26, 1974, when I was there for the first and only time.
“He stands there looking like a cross between Elvis Presley and a reject from Sha Na Na with faint Dylanesque overtones,” I wrote in MM after seeing the shows. “A battered Fender Telecaster hangs low enough for him to qualify for a place in The Ventures. His hair is short and curly and there’s a wispy beard that never seems to grow any longer. On his nose rests a pair of square shades which stay in place all the time during his shows, which make him look more like Dylan of 1965 than Dylan of 1974. He wears jeans and a red vest and maybe a denim jacket, all of which make him look a bit like James Dean too, only smaller, skinnier and more vulnerable.
“And he clicks his fingers now and then like Presley’s supposed to do and like Tom Jones does. He shakes his Fender back and forth and twists his hips around, looking as if he means business. He conducts the band with his fretboard, sometimes grinning and sometimes looking perplexed, like he’s not quite sure what’s happening next. And then he’ll surprise you by discarding the guitar and playing a tender love song at the piano. He dismisses the group, who return later with a change of instruments and take up a stance at the front with the regular bassist playing a tuba and the keyboard man strapped behind an accordion. The tuba makes a strange deep noise that reminded me of a colliery silver band from South Yorkshire.
“After all that seriousness he’ll start rocking again, the big black cat on the saxophone coming on as a bass vocalist for an old rock and roll number. If you’re lucky he’ll finish his set with a rendering of ‘Twist And Shout’ complete with the ascending build up between verses that sounds just like John Lennon was standing beside him, crouched over a Rickenbacker and yelling his loudest to drown out the screams.”
It was, of course, Bruce Springsteen and The E Street Band, whom I was seeing for the first, but certainly not the last, time. Bruce had already attracted the attention of Melody Maker, my colleague Michael Watts having written about him extensively. I took pleasure in relieving him of the baton. 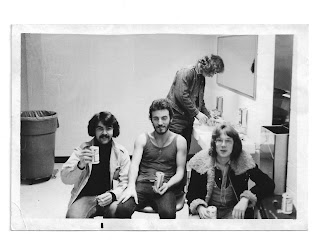 Mike and I stayed in the same hotel as the band and I chatted with Bruce in the coffee shop on the morning after the first show. He was eating a burger and fries washed down with coke, and wasn’t very talkative, shy almost, maybe a bit tongue-tied. He was thin then, quite unlike the muscular hunk he is today, with that wispy beard, and intense, like he had a lot on his mind. He wasn’t up for a real interview so I didn’t press him, just told him how much I’d enjoyed the show the night before, and he was grateful for the compliment. He was humble, courteous, like I imagine the young Elvis would have been in his Sun Records days.
As it happened, Norfolk, Virginia, had a particular resonance for me. During the Second World War my dad served as a gunner on troop and supply ships criss-crossing the Atlantic between British ports and the American naval base here.
Dad once told me that, off duty one summer’s afternoon in 1940, he took a bus to the beach, and an elderly black lady carrying several parcels of shopping got onto his bus and remained standing. A good-hearted Yorkshireman brought up to mind his manners where ladies were concerned, dad offered her his seat. The lady explained that because of the colour of her skin she was not permitted to sit in his seat, only at the back of the bus where all the seats were occupied. My dad, utterly ignorant of local custom, was appalled, so he made a point of standing for the remainder of his journey even though the seat on which he had been sitting remained vacant, and when the lady got off the bus he helped her with her packages. “May I help you madam,” he said to the astonished lady. “Thank you, kind sir,” she replied, so dad recalled. “I will remember this for a long time.”
When dad reached the beach, he wrote a postcard home to my mum, whom he had married – in uniform – earlier that same year. So it was that on my visit to Norfolk to see Bruce Springsteen for the first time I did exactly the same thing. I did some exploring and from a distance saw the naval base, then I bought a postcard and went to the beach where I wrote on it something like, “Dear dad, following in your footsteps 35 years later,” and mailed it off to the old home in Yorkshire that same day. 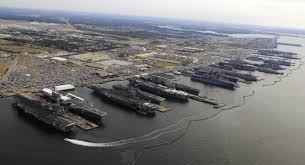 The two Bruce Springsteen concerts blur together a bit 46 years later so I can’t actually remember which one it was (and it might have been both) where Bruce and his band played ‘Pretty Flamingo’, Manfred Mann’s greatest song and a 1966 UK chart topper, but what I remember as clear as day was Bruce’s long, witty and gloriously uplifting monologue that prefaced it. As it was my introduction to Bruce live, his monologues were quite new to me, surprising, captivating and unique.
The ‘Pretty Flamingo’ story began with Bruce telling us how he once lived on a street in Jersey down which a beautiful girl would walk every day after work at five o’clock, so he and his buddies from the block would gather there at a quarter to five every day just to watch her stroll by. While the band ticked over in the background, idling like a car in neutral, Bruce conjured up in a few pithy sentences the image of a shapely heartbreaker that he and his buddies, and by inference they included some of the band, were too afraid to approach. They were desperate to know her name but too shy to ask, even some crazy guy in Bruce’s gang who often did really brave stuff because he was far too crazy to care about the consequences.
And so it went on, with the girl walking by for weeks, maybe months, and Bruce and his buddies still watching her every day, and no-one knew what she was called. By this time we in the audience were all hopelessly in love with her too, just as Bruce and his pals obviously were, and they’d coined a nickname for her. “And then… like I moved away,” said Bruce, disappointment clouding his face. “We never found out what her name was. We used to call her something. What was it that we called her Clarence? Can you remember? What did we call her Steve? I remember. Should I tell ‘em?”
Then, louder, repeated, his right arm raised. “Should I tell ‘em?”
“Yeah,” called Steve and Clarence in unison. “Tell ‘em Bruce.”
“Should I tell ‘em?” He was screaming now.
“Yeah!”
Bruce brought his arm down. A chord.
“On our block all of the guys called her Flamingo.”
Guitars and drums exploded. Perfect. Just fucking perfect. The incredible tension of the build-up was finally released and like a great tidal wave crashing through the theatre Bruce and his band launched deliriously into this great song. The crowd went nuts. But he wasn’t finished with us. Two, maybe three, minutes in, just after the first verse, after Flamingo had brightened up the neighbourhood like she just could, he brought the band down again, let them tick over again, and he had us captive again.
“What can I do Clarence?” he asked, even more passionate than before. “I gotta find that girl. I’m gonna hire a detective, someone good, like Charlie Chan.”
He was laughing now, full of fun, and we were holding on to his every word. “And when I get her I know what I’m gonna tell her. I know what I’m gonna tell her. I’m gonna tell her I’m in a band. I’m in a band!”
And off they went again, careering downhill like men possessed.
“Some sweet day, I’ll make her mine, Pretty Flamingo.”
That night I saw the rock star we all of us wanted to be in our dreams.
Posted by Chris Charlesworth