In 2017 my old pal Glen Colson asked me to edit his memoirs. It was an onerous task. Glen has a wilful disregard for the correct use of language, his spelling is atrocious and his grasp of reality can sometimes be suspect. This meant I had to try and retain the author’s singular character while rendering it readable to those for whom English is their preferred means of communication. I hope I succeeded.

I am pleased to inform all those who know Glen that his book has now been published, privately by him. As well as dotting the i’s and crossing the t’s, Glen asked me to write an introduction to his book. Here it is. 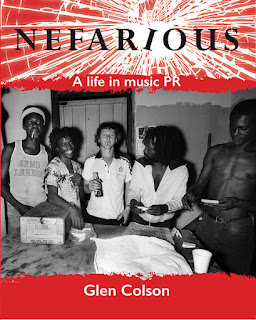 Avid readers of Melody Maker’s Raver column in the early seventies became familiar with the name Glen Colson, often referred to on the page as ‘boy publicist Glen Colson (12)’. Some might have assumed that like Jiving K. Boots he was a fictitious character invented by Chris Welch who wrote MM’s gossip column each week. They would have been wrong. Glen was real. He was the publicist for Charisma Records and, even though he was long past the age of 12, his boyish charms endeared him to the staff of the paper to the extent that he got far more mentions in the column than the acts he represented.

This was because Glen Colson was unquestionably our favourite publicist, and the reason for this was that, almost alone among the breed, he didn’t bullshit us. Charged with promoting Charisma’s acts and, later, elsewhere, he was unafraid to mention that he didn’t particularly like some of them. Other publicists wouldn’t dream of uttering a disparaging word about their clients but Glen didn’t seem to care one way or another. If he thought they were a bit dodgy he said so, and woe betide the consequences. Similarly, after he left Charisma, he declined to work for any act he didn’t much like regardless of how successful they were or how much they offered to pay him. He’d prefer to work for a complete unknown than say, The Rolling Stones or Pink Floyd, both of whom sought his services but were turned away because they were not to his taste, at least not when they approached him.

Another trait that endeared Glen to us on MM was his affable nature. He was eminently ‘pubbable’ – he was raised in a pub – as the saying goes, very funny in an oblique, droll kind of way, very down to earth, utterly self-effacing and lacking pretensions of any kind whatsoever. Height aside, there was something of the Rodney Trotter about Glen’s downtrodden status, his willingness to muck in and his thirst for arcane knowledge unattainable through formal education.

Glen’s unique modus operandi had a sort of reverse impact on those he sought to influence. If he mentioned that he did like an act then it was a pound to a penny they were pretty good and worth checking out. A drummer by trade, he knew his music well, so his word carried an authority that the utterances of rival PRs didn’t. And the proof is in the pudding – virtually all the acts that Glen helped promote, whether on Charisma or elsewhere, are nowadays revered as either superstars or lost legends.

I first encountered Glen in 1970 at La Chasse on Wardour Street. A private members club catering to the music industry, La Chasse became a sort of after-hours office for Charisma’s staff and acts. Holding court at the bar would be Glen’s boss Tony Stratton Smith, the worldly head of Charisma, surrounded by his workforce and his bands. Chief among them would be Gail Colson, Glen’s sister, Strat’s indispensable PA and consigliere, and scattered elsewhere were members of Genesis, Lindisfarne and Van Der Graaf Generator, their road crews and staffers like Paul Conroy and Chris Briggs, both of whom, like Gail, would go on to have illustrious careers in the music business. Glen, impishly small and looking very fresh-faced – hence the (12) – would be holding forth about the woes of Arsenal or telling one and all that whatever band was topping the LP charts that week was a ‘load of old rubbish’. He was prone to wild exaggeration in both directions. The opposite of ‘load of old rubbish’ was ‘the greatest thing I’ve ever seen or heard in my whole life’. The middle ground didn’t exist for Glen.

We became good friends. Then again Glen befriended all the music writers in those days, but somehow the staff of Melody Maker seemed more congenial to him that those on NME and Sounds. We went to gigs together. One night we set off the fire alarm backstage at some gig at a college in North London. Can’t remember who the band was but there was hell to play. He was a member of the MM darts team that played the occasional fixture in a Soho pub against a team of good time girls who dressed as schoolgirls. We drank in The Nellie Dean, The Ship and the Marquee Club bar. Later, like all of us, he was often to be found slumped up against the bar in the Speakeasy.

I became MM’s man in America in 1973 and in 1976 was still there, the paper’s US editor living in New York. Glen called me one day to announce that he was coming over to promote a show at the Beacon Theater by Van Der Graaf Generator and would need a place to stay when he was kicked out of whatever hotel Charisma was paying for. The quid pro quo was that in the meantime he’d buy me dinner there as often as I wanted.

A few weeks on my couch became a few months but I didn’t care. I was glad of the company apart from when it interfered with my sex life, talking of which I was much bemused by a technique Glen had in this area that I’d never encountered before. While every other man on the planet was inclined to brag about his sexual prowess, Glen did the exact opposite, humbly claiming to be a virgin or ‘not much good at it’. Invariably the girl whose favours he was seeking felt a bit sorry for him and offered herself as a guinea pig on which he could experiment to improve his skills.

The following year Glen and I ended up working together at rock manager Peter Rudge’s Sir Productions, by which time he’d got his own flat somewhere downtown. Rudge looked after The Who’s American affairs, supervised the Stones’ tours and managed Lynyrd Skynyrd and three other groups but this sort of thing wasn’t really to Glen’s liking. Then he disgraced himself by getting caught taking a few rolls of Rudge’s loo paper home with him, so he quit and went back to London to work for Jake and Robbo at Stiff.

A couple of years later, down on my luck, I was back in London, sleeping on Glen’s couch, so our roles were reversed. He introduced me to Elvis & The Attractions and threw out my flares. Back on my feet, I moved into a flat around the corner from him in Hammersmith and we became neighbours for the next ten years or more, friends for life, the kind of friendship where insults can be traded and laughed off because so much water has flown under the bridge. As the years passed I married and moved away and so, eventually, did Glen, but we still saw one another from time to time, still laughed at the same old stories of nights out in the early seventies, like the time that fire alarm went off or when we were on the lash in New York.

It came as no surprise when Glen told me he’d written a book about his life and wanted me to ‘edit’ it. He’s widely read but can’t spell for toffee and his punctuation has a tempo all of its own, just like Scott Fitzgerald before Maxwell Perkins knocked his prose into shape. Still, he has a way with a story and has lived a life that many will envy, chock full of seat-of-the-pants adventures in the demi-monde of rock and roll involving a roll call of famous friends and many more who deserve to be.

The book can be obtained by visiting this website: https://glencolson.com/
Posted by Chris Charlesworth

What a great read this is ... now I must get that Book ... hope not too many porkies! Judd x