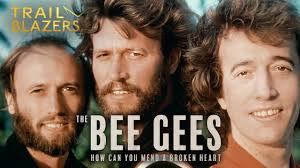 A couple of nights ago I watched The Bee Gees: How Can You Mend A Broken Heart, a two-hour documentary on Sky Atlantic that explores their fascinating, three-act, career. Act 1 takes place in London where, newly arrived from Australia, they became pop stars in 1968; Act 2 switches to New York where they became seventies disco stars – they’d prefer R&B, of course; and Act 3 sees them in Miami, plying their trade as songwriters while simultaneously recording and touring as a group.

In between times there were ups and downs galore that all feature in the documentary. It reminded me that I interviewed them twice for Melody Maker, once in London and again in New York, and bumped into them occasionally at industry events. I never knew Andy but Maurice was the friendliest, Robin the quirkiest and Barry the most practical. It saddens me that Barry is the last brother standing, a circumstance brought home in the documentary as he gazes sadly across the Miami shoreline and declares that he'd swop all the hits to have his three brothers back with him.

The MM story below was published during Act 2, and includes the interview I did in a New York hotel room.

A casual visitor to New York this month could be excused for thinking that The Bee Gees are currently running for elected office. The faces of the Brothers Gibb, serious and studied in their patriotic poses as World War Two flying aces, peer down from posters that are firmly fixed to the rear of each and every blue bus that traverses the streets and avenues of Manhattan.

Almost simultaneously the group opened a shop on 57th Street which is known as their “international headquarters”, where Bee Gees albums, tickets, posters and other artefacts are available in exchange for a few dollars.

At the opening celebrations the three brothers stepped through a huge replica of a record album, arriving in the busy street where harassed policemen fought with a crowd of mainly teenage girls.

To complement all this, The Bee Gees have spent most of the past month in a suite at the Sheraton Hotel on Seventh Avenue dispensing interviews to a constant stream of reporters, who arrive and depart on the hour like the trains at Grand Central Station.

It has been a campaign worthy of a Presidential candidate, the purpose of which is to trumpet to the nation the news that after a very shaky period at the beginning of this decade, The Bee Gees are currently bigger and more popular than at any time during their career.

In America, this is certainly true: they are selling albums in vast quantities, and the upcoming US tour takes them into the very largest arenas for the first time ever.

A graph of The Bee Gees’ fortunes would form a sweeping curve in the shape of a large “U.” With the uppermost point on the left representing their early life as an Australian/British pop group following in the footsteps of The Beatles and the corresponding point on the right depicting their current status as tremendously popular exponents of light, catchy rhythm and blues.

The low spot in the middle represents a murky period that was sparked off by their internal squabbling which lasted until their meeting with top producer Arif Mardin. It includes an embarrassing year when they were obliged to cancel a British tour because tickets didn’t sell, and a stint at Batley Variety Club which still gives Robin Gibb periodic nightmares.

But all this is forgotten in the present period of Bee Gees renaissance. This week their Children Of The World album is at number 13 in the Cashbox chart, with a single, ‘Love So Right’, at number five, following a pattern of soul-oriented hits that began with ‘Jive Talking’ and included the marvellously melodic ‘Fanny (Be Tender With My Love)’ and the funkier ‘You Should Be Dancing’.

It’s not surprising that the Gibb brothers are exuding a confidence these days that hasn’t been apparent since their initial breakthrough.

Barry Gibb, the best-looking of the three, with his coiffured hair and neatly trimmed beard, is a natural leader, holding down most of the conversation.

Maurice, now balding slightly, is perhaps more open and honest but is held down by Barry. Robin, of the buck teeth, fly-away hair and intense falsetto voice, limits himself to rather cynical quips, most of which include rather fruity language. Even so, they all tend to talk at once, frequently contradicting each other and indulging in arguments over small details.

None of them, especially Robin, like to back down which may explain those curious episodes in their early career when the he split from the others and, according to legend, locked himself in a flat, took the phone off the hook and refused to communicate with the outside world for several weeks.

What’s the reason for the current intense promotion? “The fact that the music is succeeding and our record company wants to promote us,” replied Barry.

“Publicity is a key factor,” said Robin. “People say that if the music is there, you don’t need publicity, but tasteful publicity, well-done, isn’t harmful. People in America love this kind of thing. They like to have things put smack bang in their faces. They like to be told who and what to see.”

“We’re enjoying it,” said Barry, always the more serious brother. “We’re enjoying the resurgence we’ve had in the last couple of years and we want to continue it. Our record company just wants to make sure it stays that way.”

“In fact,” added Barry, “we’ve just been voted number one group in America.” But no sooner had he begun qualifying this remark (the result of a poll in Record World magazine) than Maurice, speaking for the first time, pointed out that this wasn’t to be released yet.

I suggested that the real reason behind their comeback was their collaboration with legendary producer Arif Mardin, whose track record in the R&B field is second to none.

“Yes,” agreed Barry. “He pointed us in the right direction and although we love that direction, it mustn’t be the be-all and end-all. We’re going to continue in that direction, but if we keep doing it for another five years, we’ll be back in the wilderness again.

“This album (Children Of The World) doesn’t just have disco and R&B on it. It has different kinds of songs, even though everyone pointed out the R&B.

“To us, there are other tracks on the album and on Main Course that could be hits as well. For The Bee Gees it’s not right to put those tracks out as singles yet. We just want to develop as much as we: can in every field and that’s something that we stopped doing a while back.”

A while back, I said, referred to their low period then?

“Yes, and that was when we started listening to black music,” said Barry.

“We’ve always allowed people to influence us. The Beatles influenced us in the early days and before that Neil Sedaka influenced us. Now we let Stevie Wonder influence us. Two years ago we stopped listening to outside influences, people like Arif and others. We started writing songs that went in instead of out.”

What a wonderful read, Chris. Great interview. Have always loved
this band. The documentary brought back great memories and a lot
of tears.

Thanks, Chris, for a great read.

Thanks for share this interview whit the most better singers and songwriters of all times.