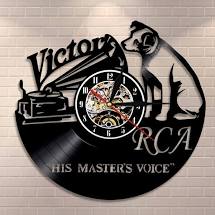 Of course, the best logo that RCA Records ever had, albeit it only in America, was Nipper the dog listening to ‘his master’s voice’ on an old wind-up gramophone. It was used by several record companies, including the Victor Talking Machine Company, RCA’s predecessor, but in the UK it was best known as the logo of EMI’s HMV label. I still think it’s the best logo any record label has ever had, with Island a close second.

Stepping out with RCA’s personnel manager while I was its Press Officer was chancing my arm but I didn’t care and having a live-in girlfriend while I was staying at Glen’s flat was never going to work either. So, when Jenny and I decided to become a couple I needed to find somewhere else for both of us to live. Combining our salaries, we rented a flat at 6 Gloucester Road in South Kensington, quite trendy. I don’t think Glen was too sad to see me go but in the event I would soon be back in that neighbourhood as a year later I would buy a basement flat in Nasmyth Street, just around the corner from his hideout in Dalling Road.

RCA had an account at an upmarket Chinese restaurant in Maida Vale called Pangs where Jenny and I ate a lot, usually washing our meal down with several Mai Tai’s. One night I was asked to join a party dining out with Al Stewart, another RCA artist, at the Mirabelle in Curzon Street where our group of eight, which included the company MD, somehow spent just over £800, about £3,500 in today’s money. Al, who was married to a daughter of the Martell brandy family, lived in Los Angeles and had expensive tastes. I’ll never forget him asking to see the ‘Port List’ and selecting a bottle for us, nor the eye-watering price of the many different wines he chose.

After the dinner the MD asked me where I lived and when I said South Kensington he said he was going that way and offered me a lift in his white Silver Shadow. He got out first and told me to keep the car, so after the most expensive meal I ever ate I was driven home in a Roller with a chauffeur in a peaked-cap. I wish my dear old mum could have seen me.

By far the best experience I had at RCA occurred in August 1980 when I took two journalists, one from New Musical Express and the other from the Sunday Times, to Chicago where David Bowie was appearing on stage at the Blackstone Theatre as John Merrick, the Elephant Man. The following month his album Scary Monster (And Super Creeps) was scheduled for release, and David had agreed to do two UK interviews to promote it. NME had promised me front page, and the Sunday Times front page of the magazine section. Our party was to stay at the luxurious Whitehall Hotel, from Monday to Friday.

When we arrived in Chicago I was informed in no uncertain terms by ‘Bowie’s people’ that each journalist would be allotted just one hour in which to talk with him. This seemed not to be a problem for the Sunday Times man but it sat uneasily with Angus McKinnon from NME, who was aghast that he’d come all this way and was staying for four days in Chicago for a one-hour audience with DB. Additionally, McKinnon – unbeknownst to me – had brought along the Dutch photographer Anton Corbijn to take pictures exclusively for NME. This, said Bowie’s people, was out of the question.

I thus found myself in the middle of a politically charged battle. On the one hand I was expected to respect the wishes of Bowie’s people, who represented the interests of RCA’s biggest star (and money-earner), yet at the same time I was beholden to the journalists who might renege on their page one agreements if the interviews were slight. This would put me in hot water with the hierarchy of RCA in London who had funded this expensive jaunt.

“It’s up to you,” I told McKinnon. “If you can engage David in an interesting, stimulating interview and along the way make it clear to him that you need to talk for more than an hour, he might just overrule his minders. But if you bore him you’ll only get an hour. Oh – and mention Anton to him yourself.”

So McKinnon did just that and David granted him not only extra time on the day of the interview but a further two hours the following morning. And – having already become aware of Corbijn’s growing reputation – he agreed to pose for him, both in his Elephant Man costume backstage at the theatre, and in the bar where McKinnon’s second interview took place.

Bowie’s ‘people’ were furious with me for having been a party to what they considered a deception, but I couldn’t care less. Next week – the week that Scary Monsters was released – NME had a Corbijn picture of DB on the cover and five pages of McKinnon’s interview inside, and a month later a picture of DB in his Elephant Man loincloth, taken by the acclaimed Mary Ellen Mark, graced the front page of the Sunday Times colour magazine. David, as I suspected all along, knew far better than his advisors how to achieve maximum coverage.

I watched David on stage as the Elephant Man for three straight nights. He had to contort his body for the role and spoke with a strange, high-pitched accent in imitation of the real John Merrick. I came away hugely impressed, as did all the theatre critics who reviewed him when, after a month in Chicago, the play went to The Booth Theatre on Broadway in New York for a further three months. He was a true polymath and I am thankful that I had this slight relationship with him. Unfortunately, I had no further dealings with David Bowie who left RCA for EMI soon afterwards.

On my way home from Chicago I spent a night at New York and looked up a few old friends. I stayed in the Essex House hotel on Central Park South and in the bar was propositioned by a coloured lady in a short dress who wanted $200 to come up to my room with me. I declined because I knew Jenny was waiting for me back home, but before I went to JFK to catch my flight I took a cab downtown and bought a pair of silver Onkyo HS-20 speakers that cost about $60. I had to pay £30 duty on them at Heathrow but they were a bargain really as they are still going strong after 40 years.

No sooner had I returned from New York than I found myself in Amsterdam for RCA’s European Sales Convention where Sad Café were the star guests. I brought along a few journalists, among them my old MM friend Chris Welch, for what was essentially a three-day binge costing an absolute fortune to very little purpose, but it was while I was there that Led Zeppelin drummer John Bonham died. Chris was no longer working for MM but someone on the paper somehow got a message to me. They desperately needed a Bonham obituary, so we wrote one together and it appeared in MM under my byline.

Oddly enough, Chris Welch had been in New York with me when Keith Moon died almost two years ago to the day. For the sake of drummers everywhere we made a pact never to meet again outside the UK.

A week or two after this excursion both Jenny and I were made redundant, as were several other RCA employees, all on the same day. It was a bit of a shock at the time but, in hindsight, it turned out to be a blessing. The reason given was “trading conditions resulting from the government’s economic policies”, and even though Thatcher was then putting all and sundry out of work I always thought there was a bit more to it than that. I didn’t really fit in at RCA. I wasn’t a natural PR because I found it difficult to bullshit, especially to music writers I’d known for ages who had become friends. I wasn’t very diplomatic. I didn’t like some of the acts on the label and wasn’t afraid to say so. I made a few enemies. Still, they gave me a £5,000 pay off – over £20k today – which was remarkably generous considering I’d worked there for less than two years.

I put most of it down as a deposit on the one-bedroom flat in Nasmyth Street. It cost £18,000, which seems ridiculous today. I lied about my employment status on a mortgage application and persuaded Shirley, my former RCA boss, to sign it off. When it came through Jenny and I went out to celebrate – at Pang’s on my RCA account. A few days later the bill arrived on Shirley’s desk. “Last time,” she said, laughing. “And no more fucking Hertz cars either.”

For the next three years I earned a precarious living as a freelance rock writer, a fragile existence if ever there was one. But that’s another story.