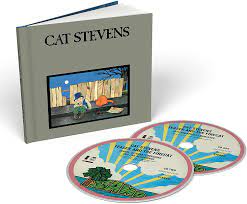 Beyond Buckden on the B6160 road to Hawes in the Yorkshire Dales there sits the tiny hamlet of Cray, two or three farmhouses and a pub called The White Lion Inn, outside of which, on the evening of Boxing Day, 1971, I parked my new car, an orange Mini, and went inside to have a beer or two with my sister and a few of her friends.

Anne’s pals asked me lots of questions about working for Melody Maker and one of them wanted to know whether I’d met Cat Stevens. Yes, I replied, and what’s more I have his new LP, Teaser And The Firecat, on cassette in my car. “Can we have a listen?” they asked.

I was pretty proud of the sound system in the car so I took a couple of girls outside, sat them in the back seat next to the speakers, started the motor, punched play and on came Steve, as I knew him in those days.

The girls loved it, adored it in fact, so much so that they spent the rest of the evening in my car while we ferried drinks out to them, even though it was a bit nippy. They were particularly taken with ‘Rubylove’, track two on side one, on which Steve’s Greek family background shines through; a verse sung in the language of his father and two of dad’s friends playing bouzoukia. They asked me to play this lively song again and again, cranked up pretty loud, and I came to realise that the reason they liked it so much was not because they were in love with Steve, which they probably were, but because of how sharp and clear it sounded. The finely-tuned Grecian strings rang out at the top end, little flamenco fills, trills and flourishes expertly played, while a soaring chorus held down the middle, double-tracked with Linda Lewis joining in so that it seemed like a whole choir had joined us in the Mini, and a percussive bass line deep in the mix, held back until verse two, that prevented the production from becoming too toppy, too shrill.

I wasn’t so wrapped up in The Who in those days that I couldn’t recognise a great production when I heard one. ‘Rubylove’, I reckoned, was as seamless an example of the art of hi-fi I’d ever heard, two minutes and 36 seconds of aural perfection, and as I sat there in the car beneath the stars that cold December night I thought ‘Rubylove’ simply could not be improved upon. And this, don’t forget, was on a cassette.

Well, I was wrong. Remarkably, ‘Rubylove’ sounds even better on this newly remastered edition of Teaser..., released last month, as does everything else really. Paul Samwell-Smith’s work on the four records he made with Cat Stevens between 1970 and 1972 – Mona Bone Jakon, Tea For The Tillerman, this one and Catch Bull At Four – were notable for his simplicity of production, austere almost, that, regrettably, gave way to a fuller sound as the 1970s progressed. Either way, it’s the remastering of such minimalism that makes this record ring out so cleanly now, which makes the restraint all the more delightful and at the same time makes my 2021 hi-fi sound like the state-of-the-art system I know it isn’t.

Setting aside for a moment this astonishing upgrade in the aural department, as I wrote in my biography of Cat Stevens, published in 1984, six of the nine songs on Teaser... belong with the cream of his catalogue while the remaining three, notably ‘Peace Train’, suggest the excesses that would mar each of the albums that ultimately followed. Despite its strong arrangement, ‘Peace Train’ was awash in noble sentiments naively expressed – a fault that would multiply with irritating regularity in the years to come. ‘Changes IV’ and ‘Tuesday’s Dead’ suffered similar limitations, albeit to a lesser degree.

Elsewhere, however, Teaser... contains many of Cat Stevens’ most memorable songs. ‘How Can I Tell You’, which closed the first side on the original LP, is unquestionably his finest love song; immensely fragile, yet moving to a degree that few writers have ever been able to capture. Like so many of the songs he recorded at this time, its beauty lies in its simplicity; simplicity as sincere as anything Stevens wrote before or since. ‘If I Laugh’, under arranged with equal taste, merely underlines the point that this kind of material is where Steve excelled and where he would have been wise to concentrate his efforts until he opted for a different life.

‘Moonshadow’, a perennial favourite, written while on holiday, in Spain, is among Steve’s happiest, catchiest songs; a nursery tale with a beguiling melody, toe-tapping chorus and charmingly nonsense lyrics. ‘Morning Has Broken’, the second choice for a single (which reached number nine in the charts during January 1972), was an altogether more sombre affair, a hymn tune re-arranged by Stevens with words by Eleanor Farjeon, unashamedly middle of the road yet reassuring for the strength of its dramatic melody which mercifully overshadows any religious overtones. The new record finally credits Rick Wakeman for his outstanding piano part, a credit left off at the time for contractual reasons.

Disc 2 on the remastered Teaser… offers demos, including two songs with which I was unfamiliar (‘The Day They Make Me Tsar’ and ‘Fisherman Song’), alternative versions, a couple of live BBC recordings, and ‘I Want To Live In A Wigwam’, the B-side of ‘Morning Has Broken’, to the best of my knowledge hitherto unavailable on CD. I was fascinated to hear ‘Rubylove’ in its infancy, without the Greek verse or personnel, and ‘How Can I Tell You’ with incomplete lyrics. Only ‘Bitterblue’ went through a fairly radical transformation, speeding up dramatically. Oddly, Stevens’ voice sounds slightly hoarse on some of the demos, as if they were recorded soon after he rose in the morning, before his vocalising got into its stride.

Finally, I should point out a minor editorial flaw in the accompanying booklet, in that the same quotes from Paul Samwell-Smith and guitarist Alun Davies, Stevens’ regular accompanist, about ‘If I Laugh’ are replicated four pages later for ‘How Can I Tell You?’ A proof reader is needed for the Cat-O-Log Collection, as the Stevens reissue programme is amusingly called.