THE WAR ON DRUGS – I DON’T LIVE HERE ANYMORE 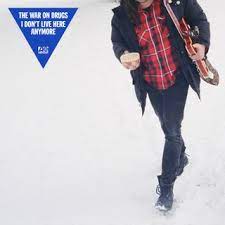 Most review of albums by Adam Granduciel’s War On Drugs project focus on lyrics that invariably describe some kind of struggle, whether it’s the vicissitudes of romance, the trials of living in the modern world or a life burdened with more than its fair share of despair. But it wasn’t the lyrics that drew me to WOD, it was the music, the aural landscape in which Granduciel frames his tales of woe.

Indeed, there are so many things to like about the music on I Don’t Live Here Anymore, the most recent WOD album, that it’s hard to know where to start, but how about the moment on its second track ‘Harmonia’s Dream’, about three minutes in, when the already busy backdrop is joined by a piercing keyboard that on first hearing reminded me of a fairground, the soundtrack to a carousel, or maybe even that wistful electronic sound on Del Shannon’s original recording of his signature song ‘Runaway’. Back then that seductively original organ part was created by Max Crook, who takes credit for having invented the Musitron on which he played it, but if WOD master craftsman Granduciel has somehow found a Musitron of his own he’s keeping mum, and from the credits I don’t know whether Dave Hartley or Robbie Bennett, both of whom are acknowledged as keyboard players on track two, are contributing this passage.

Either way, this shrill but irresistible sound lifts an already impressive track up into the stratosphere, and I can even forgive Granduciel for the U2-like fall away a minute later when the whole galloping big music affair disappears, only to rise up again, this time joined by an electric guitar that traces a descending figure and resolves on a bent note country and western lick worthy of James Burton. The organ/guitar duet is the icing on the cake as the whole wondrous episode is repeated in a minute-long coda that fades out ever so gradually.

It occurs to me that what Granduciel is doing here is taking something old – the organ sound and the country lick – and turning them into something very new and relevant to the modern era, and in doing so he unites old time rock lovers like me, with 60 years of listening behind us, with newer souls who maybe first heard WOD in the 21st Century. To bridge such a generation gap is a fine achievement.

All this new album is great, really, just like the rest of the War On Drugs’ small but perfectly formed catalogue, but this little bit of music had me smiling for the last few weeks every time the track played in my car and living room, and my guess is it’ll continue to do so well into the New Year.