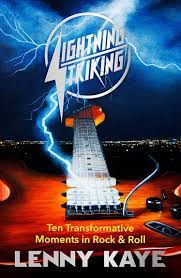 “The screams may be predominantly female, but the boys look under the hood, at the way the engine is sparking. At least that was how it was for me, and I’m the guy who collects vintage spark plugs.” That’s how Lenny Kaye reacted to seeing The Beatles for the first time, on February 9, 1964, on the Ed Sullivan Show in a USA that was soon at their mercy.

I know exactly what he means but I’ve never seen it scripted in terms of garage mechanics before, a lovely choice of metaphor. The girls wanted to marry them and the boys wanted to be them, but first we had to learn how to play the guitar, which is precisely what Lenny did.

The arrival of The Beatles is the fourth transformative moment in Lightning Strikes, after 1954 (Elvis and Memphis), 1957 (Little Richard and New Orleans) and 1959 (Alan Freed and Bandstand, Philadelphia), though ‘moments’ might better translate as ‘periods’ in this warm, lovingly composed book about those special sets of circumstances that collided to move rock’n’roll forward in shuddering, epoch-defining jolts.

Lenny, of course, was the compiler of Nuggets, the double LP of under-the-counter garage/punk classics, released by Elektra in 1972, an absolutely fabulous collection of tracks by American groups of the mid-sixties, many inspired by The Beatles, Stones and Yardbirds, who struck lightning at least once in careers that invariably imploded soon afterwards. An early contributor to Rolling Stone and fringe music mags, Lenny first entered my consciousness through his superbly informative sleeve notes on a 1972 Eddie Cochran Legendary Masters compilation, another double LP I treasure. We first met when I went to live in New York in 1973, when he was working behind the counter in Village Oldies, a collectors’ dream of a record shop on Bleecker Street in Greenwich Village. More famously, in 1971 he was asked by Patti Smith to play guitar as she read her poetry, initially for one gig only. He’s done it ever since.

It follows, then, that Lenny became a mastermind on all things rock and pop, so it comes as no surprise that his new book rocks along like a vintage record of the highest quality. It’s the way he writes, a sort of Kerouac meets Hunter ST meets every great rock writer you care to name, mixing personal experiences with what was happening at rock’s all-important moments, his role where applicable and how they affected him and informed his life. It’s very juicy and great fun, and after Liverpool we move to San Francisco for the Summer of Love, then on to Detroit for MC5 and Iggy, with a sideways swerve to fellow travellers the Velvets in NY, then New York proper where Lenny finds himself drawn towards CBGB, and becomes Patti’s accompanist, which in many ways is the heart of the matter. Lenny’s real time, no bullshit account of Patti’s emergence and acceptance, along with his on-the-spot coverage of the rise of the Ramones and Television, and to a lesser extent Blondie and Talking Heads, is worth the price of the book in itself.

London’s punk upheaval a couple of years later, metal in LA (1984) and Norway (1993), not really my bag, follow and the book closes in Seattle in 1991 with Nirvana and all things grunge.

The moments that Lenny writes about are prefaced by the events that led up to whatever happened and their aftermaths, and in this respect, he demonstrates not just his vast knowledge of the art form in which he has lived his life but excellent taste as well. His love for his medium simply bounces off the page, which means he’s largely unaffected by commercial trends and studiously avoids what might be considered uncool. You won’t find any boy bands or much prog in Lightning Strikes, but you will find four pages on Joe Meek, the English Phil Spector, an old obsession of mine and evidently Lenny’s too.

“In the early 1990s I visited the site of [Meek’s] Holloway Road studio to pay my respects, standing it the doorway of 304, stepping in his vanished footprint,” he writes. “Behind me, in a red London call box, the phone began to ring. I picked it up. There was no dial tone, only a silence that seemed enclosed, like a reverb chamber waiting for its sound to enter.”

It was probably Joe calling from a Telstar orbiting the earth.