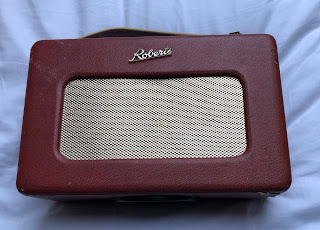 This red Roberts radio, bought some time in the 1950s, spent most of its working life on the back seat of my dad’s Triumph Herald car. Connected to an outside aerial via a cable that plugged into its back, the thick grey wire ran through the top of the back window which had to be opened slightly to accommodate it. The aerial itself was clamped on to the guttering that ran along the side of the car’s roof, originally designed to funnel off rainwater.

This sounds very Heath Robinson today but back then radios – let alone cassette and CD players or their most modern equivalent, a USB socket – weren’t standard in cars. Nevertheless, dad liked to listen to the Light Programme, the precursor of Radio 1, and one Sunday in February, 1963, as we were driving along the A59 towards Harrogate, Alan Freeman played a record on his Pick Of The Pops show that caught my ear.

I didn’t know who it was but it sounded fantastic; great tune, great singing, a truly original sound. It was, of course, The Beatles, not that I knew it at the time, and the song was ‘Please Please Me’, their second single. No word of a lie, that descending line made me prick up my ears and before the song was finished I was hooked. ‘Bugger me,’ I thought to myself. ‘That sounded good. Whoever can it have been?’ So, this radio therefore has a deep symbolic attachment for me because through its tiny speaker behind that brass grill, The Beatles and everything they brought with them first entered my consciousness. And, of course, it belonged to my dad. 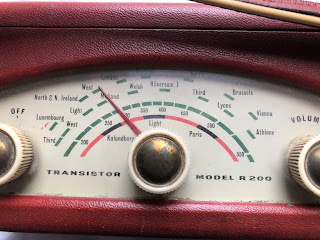 I inherited the radio in 1997 after dad died and brought it down from Yorkshire to London. It didn’t work and I figured it needed a new battery, one of those great big 9-volt PP9 cubes that weren’t that easy to find. When I finally bought one and fitted it the radio made a terrible din, just scratchy static noises as I twiddled the knobs, and I soon abandoned all attempts to make it work. For the next two and a half decades it sat unused and unworkable, but not unloved, by my bedside until last week when I needed to get my CD player fixed because it had stopped reading CDs.

On the internet I found a CD repair shop in Guildford, BS Budd in Onslow Village off the Farnham Road, one of those old-fashioned places with used hi-fi equipment and TVs for sale, not quite in sync with the modern world but all the better for it, and in its window I spotted a red Roberts radio just like my dad’s. So, when I went back to collect my now fully functioning CD player I brought in the radio and, sure enough, two days later this was fixed too. Once it received stations on the long and medium waves, but now it picks up only on the latter, about a dozen stations, some with a better signal than others.

Having the radio finally working again brings to mind The Repair Shop, the BBC TV programme I wrote about on Just Backdated a couple of years ago, wherein people bring treasured old items to be restored by experts*. But what I’m really longing to happen is to have my dad’s old radio switched on when some DJ plays ‘Please Please Me’, by that new band from Liverpool with funny haircuts.

I still see plenty of Roberts Radios on TV. It's the standard item of set dressing when an opening shot in a BBC drama needs to scream 'middle class kitchen".