FROM THE FLOORBOARDS UP! The Fans’ Perspective by Jon Abett 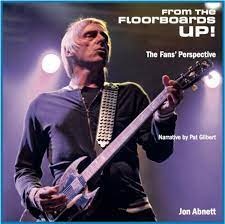 The sad passing of Charlie Watts left more than simply a vacancy on the Rolling Stones’ drum stool. Charlie was also, unquestionably, Britain’s best-dressed male rock star, a devout believer in good tailoring, a role in which he excelled for over 50 years. Meanwhile, nattily-suited Paul Weller, snapping at Charlie’s well-polished heels since first emerging with The Jam in 1977, staked his claim as heir.

Now, with sad inevitability, Weller has succeeded Charlie in this coveted spot, and the evidence is there for all to see in this 428-page photo book in which he is never less than smartly turned out, on stage at least, though I sometimes get the feeling that no matter where he is, even at the breakfast table, Weller checks the mirror to make sure his trousers are creased and that his shirt conforms to a high standard of sartorial elegance before slicing the top off his boiled egg.

Since all those drawn to this remarkable book will already be well familiar with its subject, I suppose the publishers thought it unnecessary to mention Weller’s name in the title or even anywhere on the front cover. ‘From The Floorboards Up’ is a short, sharp, guitar-driven song on Weller’s 2005 album As Is Now and The Fans’ Perspective acknowledges the source of its contents: page after page of photographs of Weller on stage with his favourite guitars, from 1990 until 2019, every one of them taken by fans who sent them to author/compiler Jon Abnett, who took a fair few himself, and also designed the book. Former Mojo editor Pat Gilbert contributes the lion’s share of text that in three parts proficiently tracks Weller’s career moves during the eras covered by the book’s many photos.

Jon Abnett and I first crossed paths when the Kent-based print company of which he is a director produced several books published by Omnibus Press. As such I was able to offer some slight assistance in the birth of this book, suggesting a publisher and putting him in touch with Roger Daltrey, who contributes a brief but heartfelt foreword that salutes Weller’s role in the Teenage Cancer Trust concerts that The Who’s singer has regularly staged at London’s Royal Albert Hall.

We begin at a Paul Weller Movement concert at the Manchester Academy on 25 November, 1990, with Paul in striped top playing Stratocasters, and end at Edinburgh Castle on 11 July, 2019, with Paul in black shouldering an Epiphone Casino. In between times only his hair has changed, growing longer and greyer, while his favoured guitar over the years seems to be a classic blonde Telecaster with black scratch plate. It’s noticeable, too, that the musicians behind him are no slouches in the wardrobe department either.

We see also how Weller has evolved from the young-looking idealist seeking a new path after The Jam and Style Council to the mature musician he is today, never content to rest on his laurels and, the odd encore aside, determinedly reluctant to look back. By diligently following his instincts, Weller has become a bridge between the idols of his teenage years, most noticeably The Who, and musicians many years his junior, like Oasis and Stereophonics, who have been inspired by his pragmatic approach and refusal to bend in the face of fleeting fads. Once a Mod, always a Mod.

It is a testament to the esteem in which he is held by fans that this book exists in the first place. I don’t think they are professional photographers but many of the shots, most in fact, look like they’ve been taken by pros, especially in the second half of the book. In an era when anyone with a mobile phone can become a photographer, I get the impression from the definition and pinpoint focus, including several close-ups, that fans were wielding Lumix, Canon and Nikon as opposed to Apple, Samsung and Sony.

As well as the pictures there’s memorabilia galore, tickets, backstage passes and set lists. Printed on good quality art paper, the book is, like it subject, stylishly attired with a stiff cover, inside of which, at the back, are 128 pictures of PW posing with fans. From The Floorboards Up! is a treat for them all.

excellent as per usual. JH