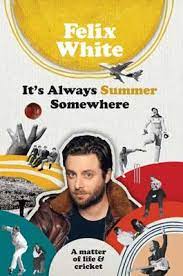 “When an old cricketer leaves the crease, you never know whether he’s gone

“If sometimes you’re catching a fleeting glimpse of a twelfth man at silly mid-on.”

The Who and others at the Oval, pictures of Jimmy Page and Elton padded up in cricket whites, a Wishbone Ash LP called There’s The Rub. Cricket and rock didn’t often collide when I was batting for Melody Maker, but the chorus of Roy Harper’s ‘When An Old Cricketer Leaves The Crease’ was warmly reassuring for a cricket fan like me when I first heard it in 1976.

Nowadays, of course, The Rolling Stones have a private box at Lords where Mick and his guests can watch Test matches but he kept his fondness for the game to himself when the Stones were in the ascendant, probably because the sport then seemed deeply unfashionable in rock circles. It probably still is, as cricket-loving Felix White readily acknowledges in his entertaining, witty and deeply personal book about how the game has impacted on his life. In making me remember these odd occasions when the only sport I truly love wormed its way into music, It’s Always Summer Somewhere not only reinforced my belief about cricket’s life-affirming virtues but promotes the theory that sports teams are much like rock bands; groups of people thrown together with one common goal who must weather success and failure together, travel to distant shores, and enjoy periodic moments of triumph yet grin and bear it when things don’t go their way.

Felix White, of course, was the lively, left-handed guitarist with The Maccabees who in 2017 disbanded by common consent at the height of their popularity, a decision initiated by singer Orlando ‘Land’ Weeks, and accepted by colleagues that included Felix’s younger brother Hugo. Since then, Felix has cemented his relationship with cricket with Tailenders, the hugely successful podcast in which he is joined by Jimmy Anderson, England’s most successful bowler ever, and Radio One DJ Greg James. It’s Always Summer Somewhere is much like Tailenders, quirky, unpredictable and funny, albeit it in a sort of bittersweet way as it lurches from his feelings about the death of his mum to the rise and fall of The Maccabees and musings on his own character and place in a world he often finds difficult to understand.

Part autobiography, part confessional, part revelation, we learn much about the inner workings of Felix’s group, how they came together, how they survived for a dozen years and how they created the four albums they released. As a candid account of how rock groups go about their business, his behind-the-scenes, fly-on-the-wall tales take some beating. Meanwhile, from the age of about six Felix has become fascinated by cricket, which acts as a constant safety net into which he can disappear when the mood takes him. Like all English cricket fans, he anguishes over the team’s defeats, especially against Australia, and delights in their victories, occasionally with undisguised astonishment.

Brutally self-critical about his personal flaws, Felix escapes into cricket at every available opportunity. While well aware that his preoccupation isn’t shared by others, he becomes absurdly knowledgeable about the game and feels utmost sympathy for those players who don’t quite come up to expectations, most especially bowlers whose ranks he once aspired to join. To this end, the linear first-person chronology of the book is interrupted by shortish chapters devoted to interviews with several of his cricketing heroes – among them Phil Tufnell, Chris Lewis, Michael Atherton, Nassar Hussain, Ashley Giles and Kumar Sangakkara – in which Felix teases interesting admissions about their great moments on the field, the importance of self-confidence and reactions to failure.

In between times we learn about Felix’s family, his love of his grandparents – his gran was Palestinian – the heart-breaking death of his mother following a lengthy battle with MS and how he dealt with it, and the entry into his life of three significant others, among them Florence Welch whose initials he shares and who, conveniently, lived close to the Kennington Oval. Among the book’s funniest moments is a dialogue between them in which Florence – bless her for trying – attempts to analyse the game.

Felix’s prose is intensely moving, carefully constructed and always evocative, quite unlike any rock memoir I’ve ever read before. Favouring emotion over facts, it takes you into the heart of his world, his thoughts and his demons, and at the end – which coincides with England’s heart-stopping victory New Zealand in the 2019 World Cup Final at Lords – you feel you’ve explored his soul and, like him, come out a winner. All thanks to cricket.