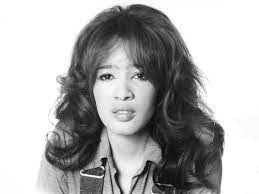 I didn't know what a goddess looked like until I saw a picture of The Ronettes, three of them virtually identical, in the NME towards the end of 1963.

Brian Wilson believes ‘Be My Baby’ to be the greatest pop record ever made and claims to have listened to it every day of his life. My kids thought it – and its follow-up ‘Baby I Love You’ – were Christmas songs because the first time they heard Phil Spector’s Wall of Sound was on his Christmas album. I’ve loved both songs since I first heard them aged 16 in that coffee bar in Skipton, the one where I shovelled threepenny bits into a jukebox until I ran out. And they’re playing right now, as I type this tribute to Ronnie Spector whose death I learned about this morning on the internet.

It is indicative of the sudden domination of beat groups in the early sixties that those magic recordings reached only numbers four and 11 respectively in the UK charts. Above ‘Be My Baby’ at number four on November 21, 1963, were Gerry & The Pacemakers, The Beatles and The Searchers, while above ‘Baby I Love You’ at number 11 on February 27, 1964, were The Bachelors, The Searchers, The Dave Clark Five, The Merseybeats, Gerry & The Pacemakers, Manfred Mann and Brian Poole & The Tremeloes. Topping the charts that week was Cilla Black with ‘Anyone Who Had A Heart’, originally recorded by Dionne Warwick.

Nevertheless, it’s a pound to a penny that every single member of all those groups, and Cilla of course, would doff their hat to Ronnie Spector, or Ronnie Bennett as she was then, the lead singer on both the records.

“When The Ronettes made their public debut with their first single, it was immediately obvious that they were to the bright, chirpy little Crystals what Elvis was to Pat Boone,” writes my former Melody Maker colleague Richard Williams in his Phil Spector book Out Of His Head. “The year they hit the chart, Helena Rubinstein’s profits certainly doubled. They looked dangerous, a threat to any average male’s self-esteem, but despite the challenge in their eyes they performed love songs in which they pleaded with their boys… This marvellously piquant contract between promise and performance was made possible because of the emotions roiling within Ronnie Bennett’s hugely quavering, massively sexy voice, a pure pop instrument the like of which no one had ever heard before. [Phil] Spector had found his instrument, and she had found her setting.” 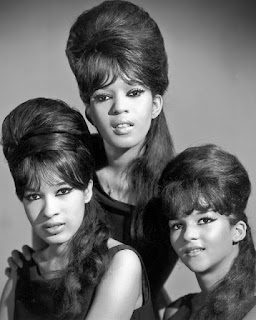 Ronnie was 19, her sister Estelle was 20 and their cousin Nedra Talley was just 18 when they recorded these two songs. All three girls had jet black bouffant hair piled way up high, wore tight dresses in shiny material or slinky pants suits and looked simply gorgeous, their bloodline a mixture of white American, black African and a hint of Irish. Their eyes, beneath the mascara and false lashes, bore through you. Their sound was that of a massed choir, backed by Spector’s multi-instrument landscape, the biggest reverb in the world, part gospel, part Wagner, part symphonic, seductive yet yearning, beguiling, breathless and oh so seductive. They danced with Ringo at the Peppermint Lounge and when they toured the UK with The Rolling Stones in 1964 Phil Spector tagged along as chaperone in case Mick and Keith had ideas.

The Ronettes went on to make many more great records, as did Ronnie on her own, but none sounded as good as these two. Ronnie married Phil, or rather Phil imprisoned Ronnie in the unhappiest of marriages, but she escaped and became the legend she deserved to be. I saw her once, in 1976, when she performed at the Bottom Line in New York with Southside Johnny & The Asbury Dukes. It was, of course, a night of nostalgia but anyone who was anyone in NY turned out to see her that night, and she sang the songs we wanted to hear.

“They could sing right through a wall of sound,” said Keith Richards who recalled that 1964 tour when he inducted The Ronettes onto the Rock and Roll Hall of Fame on 2007. “They touched my heart there and then, and they touch it still.”

(I found both the photos on the internet uncredited. I think the bottom one is a promo shot taken for Philles Records in 1963, with the top one taken a bit later.)
Posted by Chris Charlesworth