THE BEATLES: EIGHT DAYS A WEEK – THE TOURING YEARS 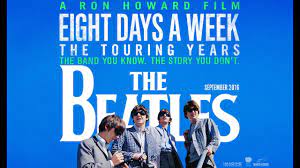 First released in 2016, this movie grabbed my attention last week when it was shown on Sky. Although much of the footage is familiar from other Beatles documentaries, authorised or otherwise, it was the first time I’d watched the whole 97 minutes, and what a gas it was.

It’s incomprehensible nowadays to watch the chaos The Beatles caused across those countries in which they performed at the height of their extraordinary popularity. Through no fault of their own, other being themselves, they were responsible for massive, industrial-scale upheavals at airports, in city centres and whenever and wherever they appeared on stage (or off, if fans got to hear about where they happened to be). It was dangerous too, a miracle there wasn’t a fatality amidst the turmoil that followed The Beatles everywhere they went.

In the 21st century it’s no doubt possible to fake this kind of thing or, at the very least, to edit in footage from elsewhere in order to create an illusion, to manufacture the scenes so as to exaggerate the situation. But this wasn’t faked. Those scenes really happened. It was on the news and on the front pages, almost daily during 1963 and 1964. Hundreds, if not thousands, of girls from the age of 12 upwards really did become wildly hysterical if they caught a glimpse of them. The level of mayhem inspired by John, Paul, George and Ringo far and away outstrips anything that has occurred since for any other act, group, boy band or solo singer, that has followed in their wake over the past 60-70 years. Everything else, from The Monkees to One Direction, is simply tame by comparison.

The film benefits from the presence of Larry Kane, the only broadcast journalist to travel with The Beatles on their US tours in 1964 and 1965. Kane was told by his superiors not to bother, that The Beatles would be forgotten about in six months’ time. In the film, however, he compares his experience on tour with the group to every other major world event in the second half of the 20th Century, from the assassination of JFK to the fall of the Berlin Wall, and feels uniquely privileged to have witnessed it.

It was nice to see the unflappable Derek Taylor telling a vast crowd of hysterical girls in some American city to calm down. “The Beatles have come a long way to play for you tonight,” he implores in his smooth British accent. “But they can’t if you don’t go back to your seats.” Others who worked with them, notably Brian Epstein and George Martin, are also featured, and there was a brief glimpse of Neil Aspinall, but I felt that their contributions, filmed long before the film was conceived, had been shoehorned in and therefore seemed slightly out of kilter with the live footage. Also, no one really thought to film The Beatles in the recording studio, not until much later in their career, which meant that when it skipped, perhaps unnecessarily, from the live footage to recording, Eight Days A Week had to rely largely on still photographs from Abbey Road, all of which had been seen many times before.

But these are minor quibbles. The joy was seeing The Beatles performing on stage, in the UK, Europe, America, Japan and Australia, and to see the happiness they brought to the world during the three years when they were an active touring band. It all happened a long time ago now but I still find it enormously heart-warming to see John, his legs apart, his small guitar held high, singing his heart out; and Paul, shaking the long neck of that violin bass, and his hair, as he joins in on the other side of the stage; and George, dwarfed by his big Gretsch, concentrating on his lead lines then stepping forward to the microphone to join Paul; and Ringo at the back, his hair flopping about, bashing away, grinning like there’s no tomorrow.

Because the film was authorised by them, there would have been an opportunity to improve the live sound, which was uniformly good, and I have no way of knowing whether it was enhanced or not. Either way, they sounded pretty damn good to me, especially when you consider the conditions in which they performed, the relatively inferior amplification equipment they were using compared to today and the tiny road crew that supported them.

And the audiences, crikey! It’s no wonder George wanted out, as did they all really. It couldn’t continue but while it did it was wonderful, as I saw for myself at Bradford 58 years ago last month.

The Beatles. The first. The best. Always.