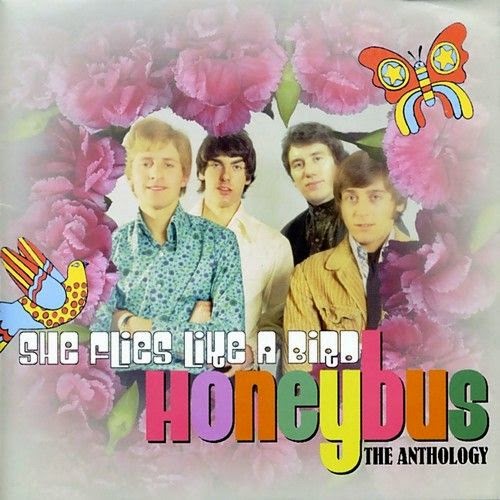 In the shadow of the great hit records produced in the sixties by The Beatles, Stones, Who, Kinks and their top-flight rivals were the also-rans and one hit wonders, some of whom released singles that maybe didn’t make the top of the charts but deserve more than to be forgotten footnotes of the decade. One of them cropped up on my iPod this morning and sounded as good as ever.
Having long ago lost the 45 I would have bought in 1968, I actually acquired ‘I Can’t Let Maggie Go’ digitally on a £3 Hits Of The Sixties compilation CD I found on the shelves of Sainsburys a few years ago which I bought purely for this song. Recorded by a group called Honeybus, it reached number eight in the UK charts in March of that year and made a comeback in the seventies as the soundtrack for a TV ad for Nimble bread. Presumably the lightness that enabled Maggie to fly was down to the lightness of the loaf.
‘I Can’t Let Maggie Go’ really is a lovely song, so redolent of the era’s smart pop, with a gorgeous fluid melody and a slightly baroque feel, all leading to the key hook line about not wanting to let Maggie go: ‘Oh me, oh my, I see her fly. Now I know, I can’t let Maggie go’. What sounds like organ pan pipes flutter gracefully the background and there’s a ’cello somewhere in the mix, enhancing the double-tracked vocals and harmonies that kick in on the chorus. It’s a very simple song, with verses repeated but the elegance of its cyclical melody diffuses any lyrical shortcomings. If there was a Maggie she ought to have been flattered.
In truth, I think it sounds a bit like a Beatles B-side, their period between Beatles For Sale and Help, and in this regard not unlike ‘Yes It Is’, John’s song on the B-side of ‘Ticket To Ride’, albeit it a bit faster and less mannered. In 1968 ‘Maggie’ was a bit of a throwback, instant nostalgia, and it therefore arrived a bit too late for Honeybus to sustain any real momentum. As it was the group’s main composer, Pete Dello, left the group soon after it dropped from sight and although he and they retained a cult following into the seventies and beyond they never again troubled the charts.
But there is a second reason for my lingering fondness for this song, for in my world there really was a Maggie. Sometime between 1967 and ’68 my girlfriend of two years, name of Margaret, left Skipton to study at Keele University near Stoke on Trent, thus triggering the end of our relationship. I wasn’t happy. Oh me, oh my…
Posted by Chris Charlesworth

plus Strawberry Alarm Clock "Incense And Peppermints", The Cowsills "The Rain, The Park and Other Things", The Turtles "Happy Together", Tommy James & The Shondells "I Think We`re Alone Now". pop perfection.

Too true... and Marmalade's 'Reflections Of My Life' and Amen Corner's 'If Parade Is Half As Nice'.

Oh yes. I feel a mix tape coming on.

If you want your ex-girlfriend or ex-boyfriend to come crawling back to you on their knees (no matter why you broke up) you must watch this video
right away...