This is an extract from Beatlemania! The Real Story Of The Beatles UK Tours, 1963-1965 by Martin Creasy, published by Omnibus Press in April 2011.
Martin spent two years tracing the trajectory of The Beatles’ UK tours, interviewing scores of people who in some way connected with John, Paul, George and Ringo en route. They include other performers on the bills, theatre and hotel employees, police who guarded them, provincial journalists and photographers who interviewed or photographed them, and – most of all – fans, some of whom were lucky enough to meet and talk with the group. Their testimonies uncover a fascinating and previously undocumented side of the Fab Four.
This extract is taken from the chapter about their first UK tour that took place between February 2 and March 3, 1963. At the beginning of the tour they were largely unknown and closing the first half of a show headed by Helen Shapiro but by the end this had changed dramatically and The Beatles were topping the bill. 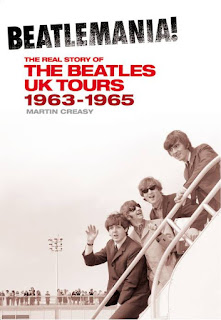 The final night on the tour was at Hanley in Staffordshire, with the two performances at the Gaumont Cinema. Such was the response of the Hanley public that night that compere Dave Allen had a hard job keeping order. More than 2,000 teenagers packed into each house and afterwards hundreds gathered outside the stage door hoping for a glimpse of the stars. Cinema manager Mr J A E Ramsden was pretty pleased with it all, declaring it “one of the most successful shows ever held at the theatre”.
There to record proceedings for the Out And About section in the local paper The Evening Sentinel was junior reporter Derek Adams who was to spend a few hours in the company of the Fab Four. Some of the profession’s most senior and respected figures would soon have gladly given up a year’s expenses to have swapped places with him that night. Derek got a great view of both houses from the wings, spoke at length to the group during the break, and witnessed The Beatles at play before sharing a fish supper with them at the end.
He confesses to only vaguely knowing who they were before the show, but he took to them as he witnessed them larking about and pushing each other around before stepping out on to the stage to try to sing over the screams during both packed houses. He was there to witness a sweaty John and Paul dunking themselves under a cold tap in the dressing room between shows. He interviewed them in the dressing room as baying girls gathered by the window on the pavement outside, and watched as Ringo threw a glass of water from the open window, much to the delight of the screamers.
“There must have been 100 girls at their dressing room window that night, but they took it all in their stride,” says Adams. “I said to John – how do you deal with all this screaming? He said ‘We’re used to it – it happens all the time’. It must have been hard for the others on that tour as by then all the screams were for The Beatles. The other acts were okay, but really everyone was there for The Beatles.”
Derek recalls the other Beatles pressing George into doing the interviews and that John came over as quite shy, despite his brash image. He was preparing to leave the theatre after the second house when John Lennon asked if there was a chippie they could drive to out of the clutches of the fans. “I knew of a fish and chip shop in an area known as Etruria, near Hanley, where you could sit at tables in the back of the shop,” says Derek. “It also served bread and butter and tea. It was arranged that The Beatles would follow my car in their Transit van and that we would all dine together. The meal lasted about an hour amid much laughter and joking and the occasional chip being rescued from someone’s tea.”
“John made his chip butties, Paul squeezed tomato sauce all over his grub, George drank his tea from a saucer and Ringo mistakenly shook sugar on his chips instead of salt. They argued over the bill – with Ringo eventually losing out.”
After they finished eating, the group had a favour to ask. “John said to me, ‘Hey wack, do you know how we get to our digs from here?’ Etruria is a mile and a half or two miles out of Hanley and they didn’t know their way so I said follow me and they jumped into the van and I got into my car and led them there. I vaguely remember them borrowing the van from a roadie. Then I returned to my lonely bedsitter in an area known as Basford.”
The Beatles stayed that night at 6 Adventure Place, Hanley, with a landlady who regularly looked after showbiz people. The property is still there today.
But what of Derek’s review?
He recalls referring to The Beatles as “a pleasant boy band, typical of many others of this time, but who could just make the very competitive pop scene if only they could make another hit record”. “When I look back now they are such fond memories. The Beatles weren’t hotshots, they were modest – there was no edge to them. They were just saying the usual things, like ‘Make sure you give us a good write-up’. We were like just five lads together that night.”
A Hanley teenager known only as Dawn also has happy memories of that night. She was so impressed by The Beatles’ performance that she wrote to them asking about whether they had a Stoke fan club. The bad news was they didn’t… but the good news was that the bad news was delivered in a hand-written letter by John from his home in Woolton, Liverpool. The letter emerged a few years ago and experts date it to March, 1963.
John put his full address – 251 Menlove Avenue, Woolton, Liverpool 25 - at the top right of his letter and wrote: “Dear Dawn, Thank you for your letter, glad you liked the show. For fan club information, I can’t tell you about opening a Stoke-on-Trent branch, but I suggest you get in touch with the northern branch here in Liverpool and they can let you know all about it. The address is Nems, 12-14 Whitechapel, Liverpool 1, Lancs. Thanks again, hope to be in Hanley again soon. Cheerio, love John Lennon x.”
This letter may have taken The Beatle only a few minutes to compose, but it would have been very special for Dawn and it underlines just how generous The Beatles could be while they had the space to take a breath. This letter is believed to be one of the last that John would have sent from Mendips.

Tomorrow I’ll post an extract from the final tour.
Posted by Chris Charlesworth

It's a fascinating and largely "untold" part of Beatle history, unlike Hamburg or the Cavern days. A couple of years ago in my nearby town they even held a kind of "Wake" to commemorate the day those Beatle booted feet in ancient time, walk upon Mansfield's pavements grey. Everyone was invited to recount their memories.

Thanks Ian. You are absolutely right. CC