THE WHO - The Seeker & Summertime Blues

Here’s a couple more of my liner notes from the forthcoming box set of Who singles on Track Records. 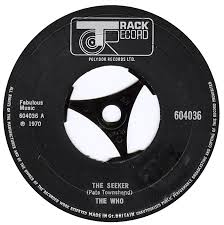 They were certainly heavy when they took the stage but The Who were never a heavy metal band, though this track – with its ‘heavy’ repeated riff and rather lumbering rhythm track – comes close. However, the introspective, yearning and evidently heart-felt lyrics are a far cry from the ‘let’s party and/or shag all night’-style of crash-bang boogie that Led Zeppelin inadvertently ushered in as the sixties drew to a close. “I wrote ‘The Seeker’ when I was drunk standing in a swamp in Florida,” Pete told Rolling Stone writer Jonathan Cott. “I was just covered in sand spurs. I kept falling and they stick to your skin and you can’t get them out, screaming with pain and it just came out, ‘I’m looking for me, you’re looking for you, we’re looking at each other and we don’t know what to do’.”
That said, most observers took the view that the song seemed to describe Pete’s ‘desperate’ search for a meaning to his life, whether it be through his peers (references to Dylan, and The Beatles) or drugs (Timothy Leary). It was a theme that would occupy his mind and music more and more as the new decade evolved.
Recorded at IBC on 19 and 20 January, 1970, ‘The Seeker’ was an unusual choice for a single immediately following Tommy which might explain its poor chart showing. Nevertheless, it has aged well and been extensively covered. It has since appeared in the soundtrack of several movies, most notably American Beauty, which won the Best Picture Oscar in 2000, and it even found its way on to the massively popular video game Grand Theft Auto.
You have to look very hard to find the name Daltrey in brackets beneath song titles on Who records, and the singer has often lamented his lack of skills as a songwriter. “I’ve tried,” he’s said, or words to that effect. “It just doesn’t seem to happen for me.” ‘Here For More’, probably recorded at Pete’s home studio in Twickenham and mixed at IBC on February 10, is actually his second solo composing credit in The Who’s catalogue – the first was ‘See My Way’ on A Quick One back in 1966 – and is a fairly lightweight country and western style song, without The Who’s usual attack which suggests that Keith was perhaps absent from the session. Despite its authentic country licks and lap-steel guitar, The Who was never in danger of becoming The Eagles (for which we can be thankful). 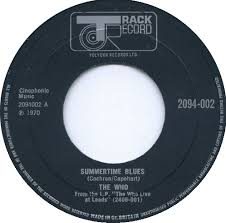 B: Heaven And Hell
Written by John Entwistle. © 1970 New Ikon Music
Produced by The Who.

The Who’s full tilt reading of stage favourite ‘Summertime Blues’ was recorded live at Leeds University on February 14, 1970, and this single is taken from the LP Live At Leeds, now generally acclaimed the finest live rock LP of this or any other era. Nevertheless, it was another odd choice for a single since the rapidly swelling Who fan base would surely have bought the LP when it was released two months earlier.
Eddie Cochran’s bouncy, rhythmic guitar style influenced Pete enormously in The Who’s early days and their version of ‘Summertime Blues’ had been a highlight of The Who’s (or The Detours) shows since before Keith Moon joined the band in 1964. Pete’s block chord slash style, coupled with John’s rumbling bass riff, was ideal for this song of teenage angst, and Roger, eternally a rocker at heart, loved to sing it. John always supplied the deep bass vocal line with a wry smile. Tragically, Cochran died in 1960 in a car crash at Chippenham, near Bath, and by 1968 The Who had made ‘Summertime Blues’ their very own. There’s no question, however, that Eddie would have been proud that his best-known song had become a staple in the set list of a live act as great as The Who, and other Cochran songs essayed by them include ‘C’mon Everybody’ and the lesser-known ‘My Way’.
A studio version of ‘Summertime Blues’ was recorded at De Lane Lea Studios, on October 10, 1967, as part of a session leased to the BBC.
‘Heaven And Hell’, recorded at IBC on April 13, 1970, was one of the best songs that John Entwistle contributed to The Who’s catalogue. A harsh warning about the perils of mortal misbehaviour, it’s a full-blooded rocker, rhythmically tougher than most of the material that Pete was writing at the time but still finely tuned towards The Who’s particular strengths. Often used to open Who concerts during the late sixties when Tommy got a full airing, it allowed Pete plenty of scope to stretch out on the solo while the others warmed up for the lengthy set that lay ahead. John recorded a slower paced version of the song on his first solo album, Smash Your Head Against The Wall, released in 1971.
Posted by Chris Charlesworth

but why did it take them nearly 2 years to record the studio version of Heaven and Hell?

Sorry but Live At Leeds aint' even best show from 1970 tour... in fact it is subdued show both sonically/energy wise in order to capture decent live recording. If you wanna talk about best live version of Summertime Blues just go Youtube and listen to Ottwa 1969 one, It simply makes utter mockery out of LAL, as does the whole show...

BlueHost is the best website hosting provider for any hosting plans you need.