THE BEVERLEY SISTERS – A Close Encounter 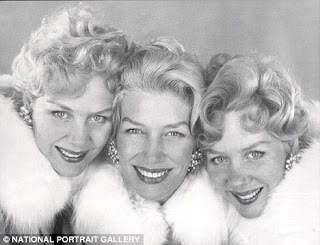 The death last month of Babs Beverley of The Beverley Sisters reminded me that three years ago I posted this story on Just Backdated, which I have now amended as a result. Babs, who was 91, is the second sister to leave us, and is survived by her twin Teddy, the last remaining Beverley Girl. Joy, the eldest, who married footballer Billy Wright, died in 2015 aged 92. Most of the obituaries suggest they were the forerunners of The Spice Girls, and not only because one of them married an England football captain.
Those accustomed to reading about my adventures with The Who, Led Zeppelin and David Bowie may be surprised to learn that in early 1971 I found myself at London’s Talk Of The Town nightclub near Leicester Square, there to witness a show by The Beverley Sisters.
The building that housed the Talk Of The Town was opened in 1900 as The Hippodrome, a name it resumed when it was taken over by Tory-supporting lap dance king Peter Stringfellow in 1983, and it is now a casino. Back in 1971 it was London’s premier cabaret showcase where punters could dine, dance beneath chandeliers and watch the featured act on a dance floor that rose up about three feet to become a stage. The impresario Bernard Delfont, younger brother of cigar-chomping showbiz tycoon Lew Grade, turned it into The Talk Of The Town in 1958, and it was firmly rooted in the traditional end of show business, the world that encompassed summer shows on the pier, Christmas pantomimes and the Royal Variety Performance.
Melody Maker, of course, was first published in 1926 and also rooted in that world, though it took a left turn with the advent of rock’n’roll, and by the time I landed there in 1970 was dominated by rock. Nevertheless, it was customary for us to receive review tickets for shows at the Talk Of The Town, even though the acts appearing there were almost always a far cry from those that now occupied our front page. The tickets were much sought after, however, as an evening there included a free meal and as much booze as you could drink. The PR office of London Management, Delfont’s umbrella company, was very generous towards us, showbiz convention dictating that reviewers who were well fed and watered were more likely to post positive reviews.
Demand to see The Beverley Sisters probably wasn’t too high when the tickets were proffered at our weekly conference but for some reason they were accepted by my colleague Chris Welch who invited me to accompany him. Eager to sample the TOTT’s hospitality and having little else on my agenda on a Monday night, I agreed to do so, and I think we called in at the Red Lion behind the offices for a few fortifying pints before we headed off to Leicester Square and settled down to a meal of roast chicken, washed down with white wine, several bottles no doubt. By the time the Bevs came on stage I was well and truly sloshed, so I can’t remember much about their performance but Chris, a true pro, made notes. When the show came to an end we were offered liqueurs with our coffee. Thank you, I said, guzzling away.
It was at this point that matters took a turn for the unexpected. A few minutes after the Sisters had taken their final bow, the London Management PR invited us backstage to meet ‘the girls’. It was explained to us that Joy, Teddy and Babs were big fans of Melody Maker, had been reading it since they were young girls, so to refuse would have been ill-mannered and reflect badly on the paper. So, too, I thought would our insobriety, but we did as we were bid and were led backstage and into their dressing where, would you believe it, all three sisters extended a warm welcome and offered us both a glass of champagne.
The room was spinning as I accepted my glass and shook their hands. In 1971 Joy would have been 47 and her twin sisters Teddy and Babs 44, and they were absolutely gorgeous, simply stunning in their identical sequinned evening gowns, every bit as beautiful as Marilyn Monroe or Brigitte Bardot, their skin as white as porcelain, their perfectly sculpted blonde hair curling down over their ears, their smiles lighting up the room, their countenance sincere, their presence as natural as mother nature herself. I deeply regretted that last bottle of wine and the liqueur, and was certainly unsure about the champagne which one of the girls insisted on topping up the moment it touched my lips. I genuinely would have liked to have been sober and able to talk to them but I just grinned stupidly, knowing that if I opened my mouth I might say something I’d regret, perhaps even something mildly unbecoming as Joy, Teddy and Babs looked truly ravishing to me, pretty much like they looked in the photo above (that I downloaded from the internet). Unfortunately I was seeing double, or was it treble?
In truth, it was a bit surreal. I’d watched the Beverley Sisters on TV when I was a child, and here I was in their presence completely tongue-tied, not because I was overawed by their fame – that reaction in the company of music stars had already waned for me – but because I was blotto. Fortunately Chris was a bit less inebriated than me and could make small talk for a few minutes while I just smiled and nodded. I have no idea how I got out of that dressing room and got home. Chris ended up writing the review.
RIP Babs (and Joy). It was a lovely evening that night in 1971 and you and your sisters were absolutely delightful. I’m so sorry I was too sloshed to talk to you or them – but maybe it was for the better.
Posted by Chris Charlesworth