THE WHO - The Track Singles 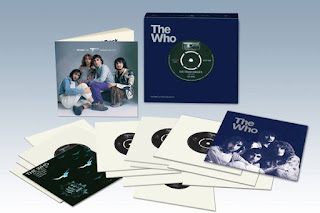 Regular readers of my Who posts on Just Backdated, and there must be a few of you, will be aware that I have contributed the liner notes to the box set of 7-inch vinyl Track singles that is being released at the end of October. It is the third in the series, with similar boxes of Brunswick (eight discs) and Reaction (five, including the Ready Steady Who EP) singles already released and a fourth, the Polydor singles, yet to be scheduled. Mark Blake wrote the notes in the Brunswick and Reaction boxes and Matt Kent is lined up for the slightly more difficult task of writing about the later singles, of which there are 15, the same as the Track box. I think I had the pick of the bunch by writing about the Track records, though I’m probably not alone in believing that The Who rarely put a foot wrong in the sixties.
Anyone assuming that record companies reselling the same music again and again in different formats is a practice that came in with CDs in the eighties is directed to page 210 of Electric Shock, Peter Doggett’s new and first-rate history of popular music, which I will be reviewing on Just Backdated in due course. At the start of the fifties, writes Peter, “many early LPs were simply collections of previously released 78s, repackaged as a ‘gift’ to the artists’ fans… [and]… to explore the extended landscape of the 12-inch disc, they embarked on another round of creative marketing, by adding a handful of additional tracks to their existing ten-inch albums and presenting them as new product.”
So reselling the same music again and again has been ongoing since the introduction of the 12-inch album and everyone is guilty, of course, not least The Who. Nowadays, however, the practise has been upgraded to a degree, insofar as the music of heritage acts is being repackaged in limited edition collectable sets, in many cases facsimiles of earlier vinyl releases, hence the presentation boxes of Who singles. They are, quite simply, nice things to own.
Well, my copy arrived last Thursday and very nice it is too, a sturdy box in the same shade of navy blue as the picture sleeve for ‘Won’t Get Fooled Again’, slightly lighter than the sleeve for the Tommy EP. All the singles from ‘Pictures Of Lily’ to ‘5.15’ are present and correct, including (to my surprise) the ‘See Me Feel Me’/’Overture’ single that was released and withdrawn in October 1970 in favour of the EP that came out two months later. Designer Richard Evans has paid scrupulous attention to detail, even down to spelling John’s name wrongly (as Entwhistle) in the composer credit for ‘Doctor Doctor’ on the B-side of ‘Lily’, as it was on the original single. They all have black Track labels barring ‘5.15’ which is silver, again like the original, and have plain white sleeves except for the Tommy EP and ‘Won’t Get Fooled Again’ which had a picture sleeve with a shot of the four lads from the same David Montgomery photo session as the well known pic that appears here on the front of the booklet.
And they sound fantastic! Even on my budget record player, the sound of The Who at their very best comes zinging out of the tiny speakers at either side and, of course, seriously rattles the brain on cans. I played most of them yesterday afternoon, hoping that the far-from-new needle wouldn’t harm them, and – perhaps inevitably – pride of place goes to ‘I Can See For Miles’, with ‘Pinball’ and ‘Fooled Again’ running The Who’s 1967 masterpiece a close second and third. In a note at the back of the booklet, our attention is drawn to the fact that Jon Astley remastered the tracks from the original mixes at half-speed “in the way that early Motown records were cut”. This evidently gives a better finish because the cutting head is moving about more slowly so it has more time to give a more detailed, less distorted, record with a much smoother top end.
As for the booklet, modesty precludes me from commenting on the notes but the design features contemporaneous adverts for the singles as well as a few facsimiles of interesting memorabilia, including the form on the back of the IBC Studio tape box for ‘Moon Blues Song’, on which someone has helpfully written ‘became known as Dogs 2’. Keith is actually the only member of The Who whose photograph appears inside the booklet, twice actually – once atop his ‘Lily’ kit and looking very fetching in his blonde wig and corset promoting ‘WGFA’.
So just to round off this report on the Track Singles Box Set, here’s what I had to say about the final single in the collection, ‘5.15’, with a scan below of the actual single in the box. 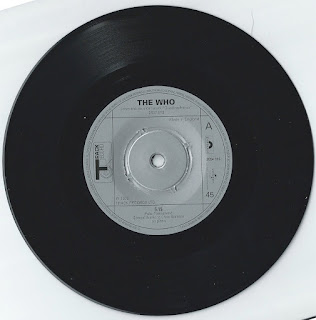 Produced by The Who at The Kitchen, Battersea, June 27, 1973, ‘5.15’ is the best-known song on Quadrophenia, Pete’s second major rock opera and The Who’s sixth original album. Quadrophenia is the story of the journey of a Mod by the name of Jimmy, whose restlessness, frustration and ultimate disillusionment drive him almost to suicide. It takes in many Mod concerns – clothes, style, Brighton trips, pills and even a Who concert – and ends on a note of triumph when Jimmy somehow manages to free himself from the shackles of the cult. It is now probably best known for the 1979 cult film starring Phil Daniels.
As a unified piece of music it was always going to be tricky slicing off a single from Quadrophenia but ‘5.15’ – which describes Jimmy’s extra-sensual experiences on a train from London to Brighton sandwiched between two city gents – was the best choice. “He goes through a not entirely pleasant series of ups and downs as he thinks about the gaudier side of life as a teenager that we see in newspapers like the News Of The World,” said Pete.
Opening with a brief ethereal meander, ‘5.15’ soon settles into a memorable riff, emphasised by a horn section, before returning to its dreamlike state. With lyrics about “girls of fifteen sexually knowing” and being “out of my brain on a train” it invited the attention of social activist Mary Whitehouse, the permissive society’s worst enemy, but she was evidently looking the other way at the time. However, ‘5.15’ was probably too raw to be a serious chart contender, but listen out for Keith imitating the sound of train wheels decelerating, an effect he repeated when The Who performed ‘5.15’ live, which they often did.
Invited to promote the song on the 500th edition of Top Of The Pops on October 3, The Who disgraced or – depending on your point of view – distinguished themselves by smashing their equipment (Pete wrecked a lovely orange Gretsch Tennessean, a gift from Joe Walsh), abusing the producer Robin Nash and misbehaving in the Green Room, thus earning a ban from the BBC staff club that was lifted after Track sent a letter of apology.
In later years, a spectacular bass solo from John was incorporated into ‘5.15’, and this continued whenever it was performed live right up to John’s death in 2002. Thereafter, using film and audio footage (from a charity show at London’s Royal Albert Hall on November 27, 2000) of John synchronised with the live group, it was retained for Who concerts dedicated to Quadrophenia and for some shows on the ‘Who Hits 50’ tour in 2014/5.
Produced by Pete at Eel Pie Studios during the spring of 1970, ‘Water’ is an overlong, rather heavy-handed rocker; another Lifehouse reject that mixes a rather lascivious hook line (‘water’ rhymes with ‘daughter’ throughout) with an allegory suggesting water as the cure to quench spiritual thirst. Often played on stage in 1970 and ’71, it seemed destined for inclusion on whatever album would follow Tommy. Eventually Pete came up with several far better songs, and despite several stage comments at various shows during 1970/71 announcing it as an imminent Who single, ‘Water’ was abandoned, only to resurface as the B-side of ‘5.15’.

My first Who purchase was the single Legal Matter / Instant Party. It was in the newsagent's "ex-jukebox" rack. I seem to remember such things were common place back then, and we all bought the plastic centers to clip in where the original had been pushed out. Still sounded awesome to me.

Did you know you can shorten your long urls with Shortest and receive $$$$ for every click on your shortened urls.

Start following our trades today and gain up to 270% daily.

In this regard, Packaging Ninjas is making custom presentation boxes. You can get it for wholesale business and for family functions. These boxes look elegant in different designs and styles. To get highly customized packaging display boxes place your order and enjoy amazing deals. To get outstanding presentation boxes contact us and familiarize us with your requirements custom printed boxes.

Thank goodness this Informative article is interesting and clear. Others I've read made me feel like I needed a degree to decipher them. candle packaging wholesale