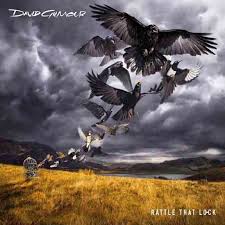 It was probably a coincidence but on Friday night I watched David Gilmour on Later... With Jules Holland and on Saturday morning I dropped a few old shirts off at the charity shop in East Horsley, the same one where I’ve picked up the odd CD for £1 over the years. So after handing over the shirts I skimmed the shelf of CDs and found Echoes, the 26-track Pink Floyd ‘best of’ compilation for a very affordable £1.50. Reasoning that this investment was at least on a par with the £1.25 I’d just spent on a loaf of bread, I slapped down my money and listened to it as I drove around doing other bits of shopping, everything from ‘See Emily Play’ to post-Waters stuff, an absolute bargain even though I have most of the tracks spread across other Floyd CDs at home.
The next day, inspired by Gilmour’s turn on Later…, I decided to invest in his new solo album Rattle That Lock, a snip at £10 in Sainsbury’s, and, with Floyd gems like ‘Shine On…’ and ‘Comfortably Numb’ still ringing in my ears from the previous day, was reassured by the very first note I heard after I’d slipped it into the CD player. That single note, played on an electric guitar, probably a black Strat, high pitched and sustained with absolute clarity for a few seconds, introduced an instrumental wash of elegant beauty and was sufficient to identify Gilmour as the man behind the album, his fourth from behind the cloak of Pink Floyd and certainly his most ambitious. The 10 songs on Rattle That Lock certainly have an echo of Pink Floyd about them, though they lack some of the majesty and occasional sense of doom that sprang from Roger Waters’ disillusionment, Rick Wright’s vast keyboard palette and Nick Mason’s fat dumpling drums. Nevertheless Gilmour’s songs have a beauty all of their own and have been recorded to the same high degree of technical perfection that informed the group that passed into history with the sad death of Rick Wright in 2008.
About half the songs on the album feature lyrics written by Gilmour’s wife, the novelist Polly Sampson, who is photographed giving her husband a goodbye hug on a train station as he sets off with a guitar case for places unknown. One of them, ‘A Boat Lies Waiting’, features harmonies from David Crosby and Graham Nash, and is dedicated to Wright, while another, the atypical ‘The Girl In The Yellow Dress’, is top-end cocktail jazz introduced by a stand-up bass. Most of the songs, though, feature Gilmour’s breathy voice on sweeping songs about life’s passing uncertainties and, as is to be expected, highlight his eloquent guitar, those power-streaked rumbling solos that start low and end high, unmistakeably him, the same effortless, silky technique that graced so many Floyd tracks.
The album is bookended by instrumental pieces, the opener seeping into aural consciousness from nowhere until that opening signature note rings out, the closer drifting away into silence. This, too, was a Floydian trait, and though that group may be no more, Rattle That Lock is the next best thing.

Start following our signals today and make up to 270% daily.